"Bread Week!" is the theme for this week at I Heart Cooking Clubs (IHCC), where we are currently cooking from Madhur Jaffrey's recipes. There are a number of bread recipes of Madhur Jaffrey's which I've bookmarked, and decided to try out this Naan Bread as it has always been on my list of to-do, so now seems the perfect time to try my hands at making some Naan Bread.

The dough is mixed and left to rise until doubled in size.
Preheat the oven to the highest setting, mine is 250 degrees, place a baking tray in the middle rack.
Divide dough to six small rolls and roll out to an oval shape.
Remove the hot baking tray from the oven and place the rolled out naan dough onto the tray.
Bake for about 5 minutes until they are puffed up, then transfer the tray to a rack above, under the broiler to brown it, about 1 minute. 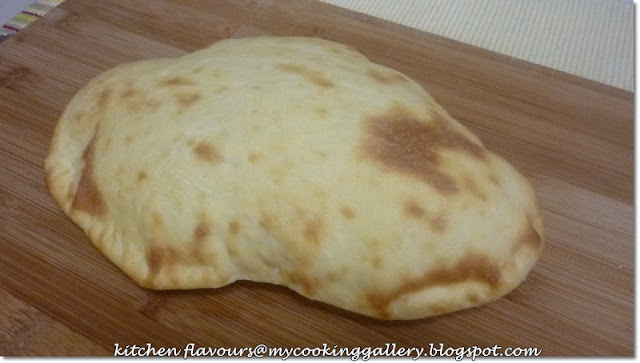 The puffed up Naan Bread just after baking, lovely with spots of brown.
The most exciting part is when the Naan Bread puffs up in the oven, definitely makes me smile when I saw the first one! 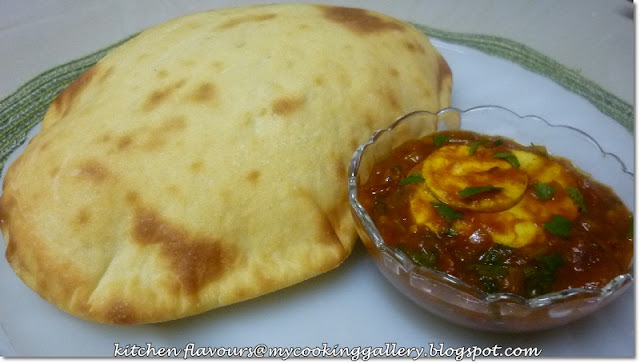 I made some Hard-Boiled Eggs Masala, which I will post next week, to eat with the Naan Bread. Overall, there is nothing special about this Naan Bread, but I did enjoy eating this with the eggs masala. This Naan Bread is quite plain in taste (I think it needs a little more salt) and perhaps with some added flavours like chopped garlic or cumin seeds or even chopped coriander, would definitely make it much more flavourful. I will definitely try adding some of it the next time when I make this, as I think that even though it is quite plain, it would be great with some flavours added in.

To view other breads that my friends are making, do stop by IHCC.


I'm sharing this with :
BYOB, Bake Your Own Bread hosted by girlifchef