Au Revoir Chef Pepin! (Until We Meet Again), we at I Heart Cooking Clubs (IHCC) are saying farewell to our featured chef for the last six months, Jacques Pepin. It has been a wonderful adventure cooking with Jacques Pepin recipes and will be seeing him again in one of our potluck weeks. The new featured chef for the next six months is Ellie Krieger. She is a certified dietitian and nutritionist with several books to her name, with delicious and healthy recipes. If you would like to join us, do drop by IHCC for more info.

To bid "farewell" to Jacques Pepin, I've made his Garlic Soup. I do not cook creamy soup like this as often, and this sounds so French! haha! There's leek, garlic and potatoes, all my favourites. A quick and easy soup to make, yet it is so flavourful. 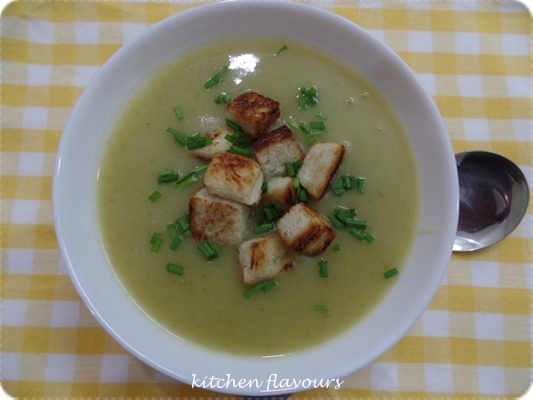 Leek and whole peeled garlic are sauteed in some olive oil till soften, then the potatoes are added in along with some stock and salt to taste. As usual, I've added a few extra garlic. Boil gently for about 30 minutes until the potatoes are soft, then the mixture is pureed in a food mill, I've used an immersion blender which takes only a minute or so. Stir two tablespoons of butter through the hot soup and serve with croutons.


To make the croutons, cube some white breads, heat some olive oil in a skillet and drop the bread cubes into the hot oil, turning them often until the bread cubes are brown and crispy. 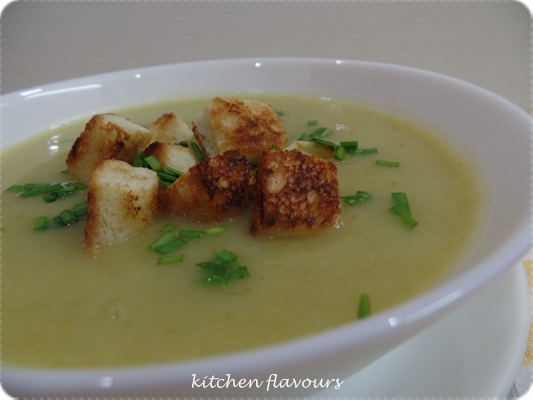 I garnished with some chopped chives from my garden pot. Lovely garlicky creamy soup! The potatoes makes a natural thickener and adds creaminess to the soup. A winner with my son and daughter. Delicious eaten with the croutons.

Serves 6 to 8
1/4 cup olive oil
2 medium leeks, trimmed (leaving most of the green), split, washed, and sliced
12–15 garlic cloves
7 cups homemade chicken stock (see recipe below) or low-salt canned chicken broth
2 pounds potatoes, peeled and cut into 1-inch cubes (about 4 cups)
1 teaspoon salt, or to taste
2 cups cubed (1/2-inch) firm-textured white bread
2 tablespoons unsalted butter
Heat 2 tablespoons of the oil in a heavy pot. When it is hot, add the leeks and garlic and cook over medium heat for about 2 minutes, until the vegetables begin to soften. Add the stock, potatoes, and salt and bring to a boil. Cover, reduce the heat, and boil gently for 30 minutes.
Meanwhile, heat the remaining 2 tablespoons oil in a large skillet. When it is hot, add the bread cubes and sauté, stirring almost continuously, until they are evenly browned on all sides. Remove with a slotted spoon and set aside.
When the soup is cooked, push it through a food mill. Stir the butter into the hot soup and serve with the croutons.

I'm linking this post with I Heart Cooking Clubs (IHCC), theme for this week,
Au Revoir Chef Pepin! (Until We Meet Again) 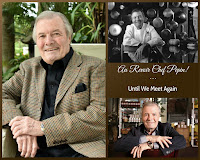 Posted by kitchen flavours at 11:54 PM