Baked Eggs With Kale and Ham

This week at Cook the Book Fridays, the selected recipe is Baked Eggs With Kale and Smoked Salmon. CtBF is currently cooking through David Lebovitz's cookbook, My Paris Kitchen.

I was looking forward to make this, as we love eggs around here, and also to use my homegrown kale, which I have been using in a number of recipes recently.

David's recipe calls for smoked salmon but I've used one of the variations that David has suggested, slice of harm torn into pieces. According to him, bacon, crumbled cooked sausages or even sauteed mushrooms can be used instead.

I've used small ramekins for individual servings. Bottom layer is the sauteed kale, followed by a layer of the torn ham pieces. Crack an egg over the ham pieces, scatter some grated cheese over, of which I have used mozzarella. Dribble a tablespoon of heavy cream over the cheese, and sprinkle some bread crumbs over. The breadcrumbs is made by toasting in a skillet with butter, garlic, thyme and salt, until toasted.

Bake for 10 to 12 minutes or until the eggs are cooked to your liking. Serve immediately. 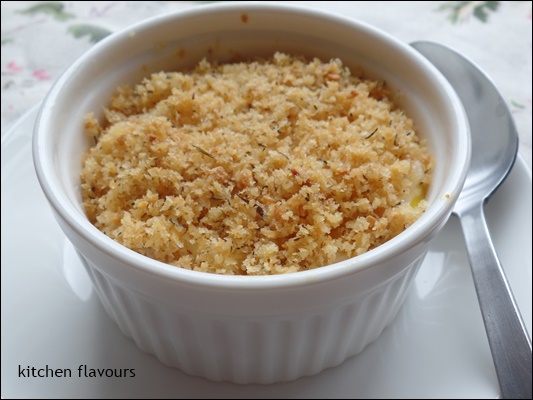 I baked these for 16 minutes, as the egg whites are not done yet at 12 minutes. Serve immediately, as up would want to eat this right after baking. You can get everything prepared and ready, then assemble and bake it later about 15 minutes or so,  before you intend to serve it. 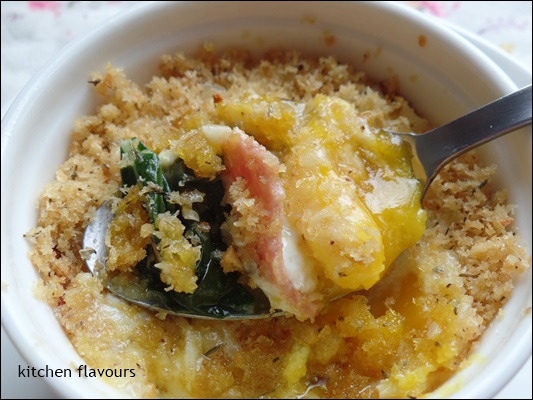 A spoonful of deliciousness! 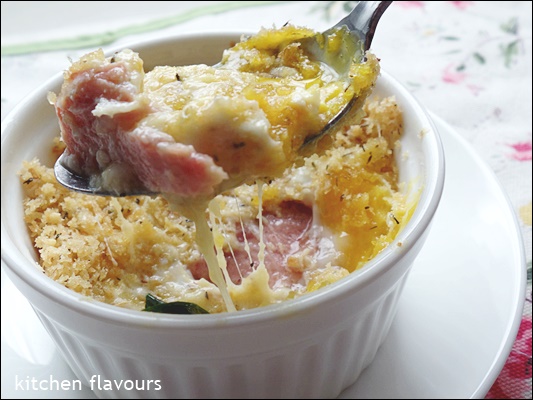 The melty gooey mozzarella, my kids favourite cheese!  I've made this for lunch, and it was enjoyed by everyone. There's a request for a repeat! I would try with the other variations that David has suggested.


Do stop by CtBF to view everyone's take on this delicious baked egg dish. If you have the book or thought of getting one, please do, and join us! Full details here.

Posted by kitchen flavours at 8:42 PM