I Heart Cooking Clubs (IHCC) is having a Potluck this week. I've made Nigella Lawson's, Roast Chicken with Lemon, Rosemary, Garlic and Potatoes, from her book "Simply Nigella". In the book, she says that "I am back to familiar territory with this ; the smell of chicken roasting with lemon, rosemary, and garlic has always seemed to me the essence of all that is comforting. But this version is so sprightly and robust that I feel it uplifts as it soothes; it is good-mood food, and good-mood cooking, too. You just throw everything in the pan with brio  and let it roast away merrily". 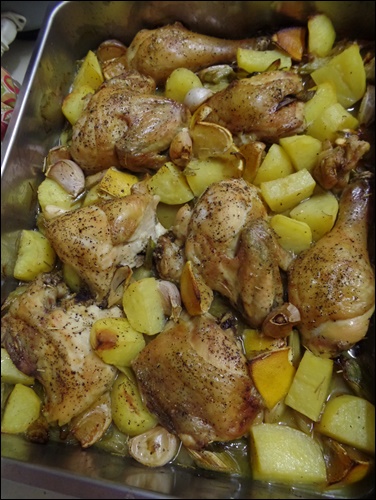 Instead of roasting a whole chicken, I have cut the chicken into eight quarters. And I've used dried rosemary. I've used two lemons as indicated in the recipe, but the next time I will use only one, as I find that the lemons makes this roasted chicken a little too sour. And I've used two heads of garlic instead of one.

This is one super easy meal to prepare, just put everything in the pan and let the oven do the work! 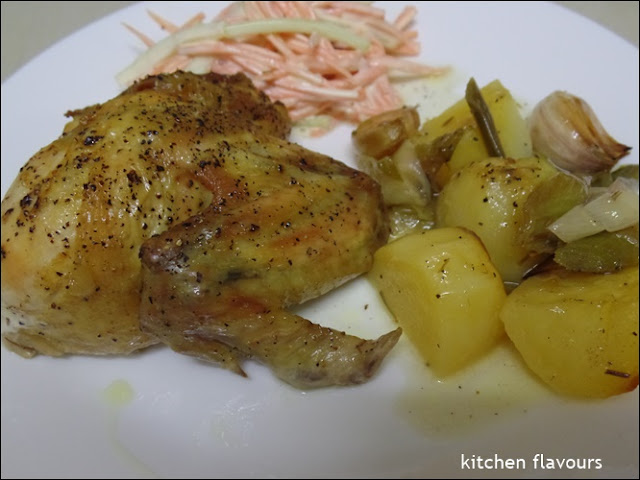 Overall, this makes a nice roasted chicken meal. Moist, tasty tender chicken and always a favourite in our house, potatoes.


Preheat the oven to 425F. Get out the biggest roasting pan you have, and pour all but a teaspoon or so of the oil into it. Throw in the chopped rosemary needles and the garlic cloves.
Trim the leeks and cut each in half lengthways, then slice into half-moons and drop these leek curls into the pan, too.
Cut the potatoes into 1/2-inch slices, then cut each slice into 4, or just halve them if the potatoes are small, and add these to the pan.
Quarter the lemons, then cut each quarter in half, take out as many pips as you can without exerting yourself unduly, and toss the lemon quarters into the pan. Now schmoosh everything to mix, and then make a space in the middle of the pan for the chicken to sit in.
Untruss the chicken, place it in the reserved parking space, pour the tiny bit of remaining oil on top of it, and sprinkle sea salt flakes on top of the chicken only. Place in the oven for 1 hour and 10 minutes, and if the juices of the chicken run clear when you push the tip of a knife into the joint where the thigh meets the body, remove the chicken to a board to sit, letting the juices from its cavity spill back into the pan as you do so, then put the potato mixture back in the oven for 10 minutes until soft and golden. If the chicken needs longer, keep everything in the oven until the chicken's cooked.
When it's ready, and the chicken has rested, either carve it or cut into joints as wished - I find the chicken goes further if carved. If you don't want to serve the lemony, garlicky potatoes from their pan, transfer them to a serving plate or dish and sprinkle with 1/2 a teaspoon or so of finely chopped rosemary needles and sea salt flakes to taste.


I'm linking this post with I Heart Cooking Clubs (IHCC), theme for this week
August 2017 Potluck ! 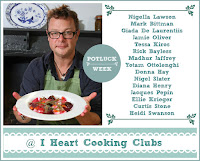 Posted by kitchen flavours at 9:05 AM