When it comes to Macaron, I'm a late starter! Making macaron has been all around bloggerland about two years ago, and I have never attempted to make any, until now. My daughter has been asking me to make macarons for ages, and she especially reminded me dozens of times and requested it again for her birthday last month. How could I delay it any longer.

I am not fully confident of making Macarons, as I have read lots of unsuccessful attempts and really am doubtful that I would succeed. Since it was a birthday request (an overdue one from last year, brought forward to this year!), I decided to try my hands at making these famous French cookies, and also to stop my daughter from reminding me again and again! :)


I read up on some troubleshooting and problems on baking macaron from the internet before I start with anything! And decided to use the recipe from Joy of Baking, one of my favourite website. Stephanie Jaworski has made a video on how to make French Macarons. I watched the video twice and then crossed my fingers before I began! haha!. 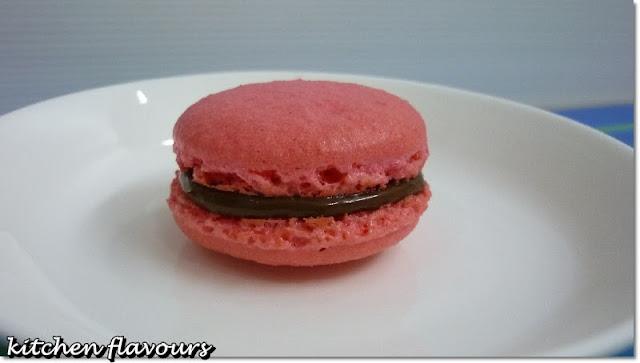 It was advised to use "aged" egg whites, that is not a problem, I have dozens in my freezer. During the beating of the egg whites and the mixing of the ingredients, I was keeping "my fingers crossed" throughout and hoping that they would turned out OK. I have added in half teaspoon of vanilla extract and added some pink gel food colour, other than these I have followed the recipe closely.

When the mixture is ready, it is piped into rounds (I used a template just as Stephanie advised), leave the pan uncovered for about 30-45 minutes so that a "skin" has formed on the top. Using a silicone baking mat is most suitable as the cookies will be easily removed later on. Bake for about 12-15 minutes at 160 degrees C. My first tray was a total letdown, the macarons has cracked all over the surface and no sign of any "feet"! I was totally disappointed. Remembering the troubleshooting with cracked tops, the bottom heat must have been too hot and the advise is to slot another baking pan underneath before baking. So I did that to the next two trays, kept checking them almost every minute and keeping my fingers crossed, hoping that they will have "feet"! And they baked up perfectly, with feet! I was very happy, almost danced with joy! Haha! Though it took about 15-16 minutes for the macarons to bake till lightly brown. I have read from here that it is advisable to over-bake it a little rather than under-baked with the insides still not cooked.

All I can say is, no other cookies has made me this excited before! Hahaha! 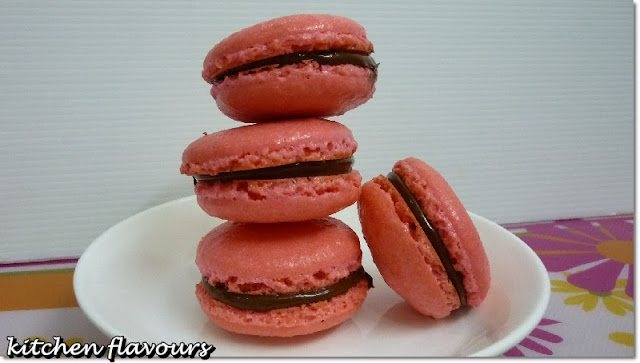 Let the macaron cool completely on the baking pan and remove them gently when cooled. I did not make any filling as I wasn't sure how my macarons would turn out. So good old Nutella to the "rescue". I filled them with nutella and kept the macarons in the fridge for two days as advised, according to Stephanie and other websites that I've read from, the flavours from the filling will soften the cookies a little and it will tastes much better. Of course, I ate one first, and it was so good! 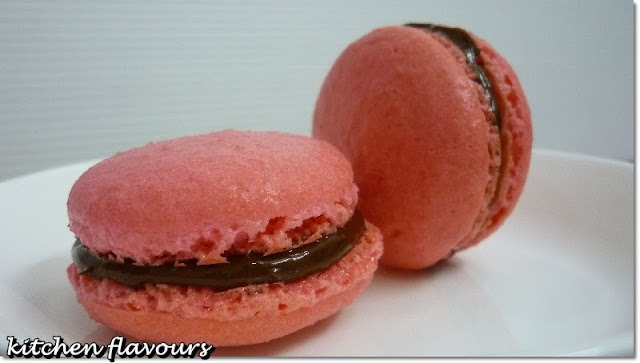 These macarons have a crispy skin crust and the inside is a little sticky and chewy. Best described it as such, "imagine eating a candy floss, sticky and chewy as it is melting in your mouth"! I have not eaten a Macaron before and perhaps I should buy one just to compare, is it supposed to be like this? I like it that this recipe is not too sweet, I find the sweetness is just right. 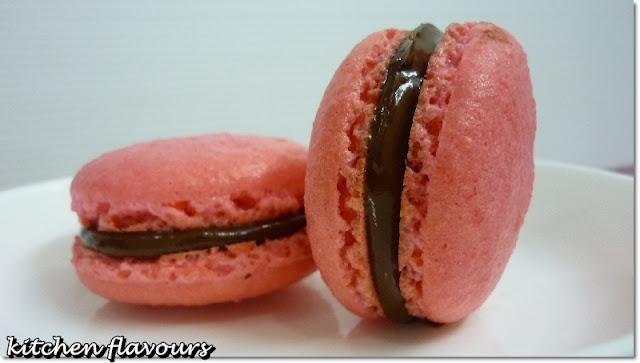 Now, I can understand what the fuss is all about! We really like eating these French cookies. I am very happy with my first attempt! Well, did I manage to keep my daughter from asking me for macarons again, now that I have finally made some for her? No! Now she is bugging me to make more to share with her close friends at school!

Note : Weight measurements (grams, use a digital scale) are only given for this recipe. Volume mesurement (cups) are not recommended.


Have ready three baking sheets (make sure they have flat bottoms (no warping) lined with parchment paper. To make all the Macarons the same size, I like to make a template. Take a piece of parchment paper and draw 20 of 1-1/2 inch (3-4cm) circles, spacing the circles about 2 inches (5 cm) apart. (Mine was 12 to a tray). Place the template under your parchment paper so you can use it as a guide.

Place the ground almonds and confectioners sugar in a food processor and process until finely ground (about 1 - 2 minutes). Sift the mixture to remove any lumps.

In the bowl of your electric mixer, fitted with the whisk attachment (can use a hand mixer), beat the egg whites and cream of tartar, if using, on medium speed until foamy. Gradually add the sugar, and continue to beat, on medium-high speed, until the meringue just holds stiff peaks (when you slowly raise the whisk the meringue is straight up, no drooping, called a "beak") (but do not over mix the meringue or it will "break"). Then in three additions, sift the ground almond/sugar mixture over the meringue. When folding, cut through the meringue and fold up and over, making sure to scrape the bottom and sides of the bowl. Once the almond mixture is completely folded (called macaronage) into the meringue (the batter will fall back into the bowl in a thick ribbon) it is time to pipe the Macarons.

Posted by kitchen flavours at 12:21 PM