The first Fougasse that I've eaten was an Olive Fougasse, which I bought from a  bakery in Mid-Valley, and I have not seen any other bakery that sells Fougasee. It was freshly baked and warm when I ate it, and it was good. I have forgotten about that bread until I've baked this Fougasse, and it was as good as the one I've eaten ages ago!


This recipe is taken from "Baking By Hand", a book, which I bought quite sometime ago.  Just as the title of the book, the breads in this book are kneaded and made entirely by hand. This is the first recipe that I've tried and almost gave up when halfway thru making this bread. Why, because it takes a much longer time that I thought it would, and secondly, the dough is one of the wettest and stickiest dough which I've handled, similar to making a Ciabatta. I was so tempted to give up and dump the sticky dough. It sticks to everything, the bowl, the working counter, and my hands, even with sprinkling of flour! But then, it is stated somewhere in the recipe that "this dough is significantly looser, or wetter, than other dough recipes in this book". That prompted me to carry on, telling myself that if I've managed to handle this dough, somehow, it would make me more confident in trying out other recipes in this book, and there are many recipes that I want to try.

I've made half a recipe for two loaves, one is Seeded Fougasse and the other Cheese Fougasse.


Firstly you would need to make the biga starter, 12 hours before the bake. The next day, the biga is mixed with the rest of the dough ingredients as per the instructions in the recipe. I would not go on with the making of the bread, (you may refer to the instructions below). But plan ahead, if you want to make this bread, there are two-30 minute rests, then the dough is fold and let rest for 30 minutes, repeat three more times. This is a nightmare, I can't fold the dough, it was a sloppy sticky mess, I did the best I could, but how best can you fold a sticky mess of dough??. This is the part that I almost gave up, I thought I've failed with the dough at this point! After four times of "folding" the dough, let it rest for another hour. When the dough is ready, divide the dough into two (for half a recipe), shape into a round, and let rest for another hour. Finally, the dough can be shaped and baked. Mine took much longer, as I left the dough to rest for a bit more at each rest, as they are really sticky, and letting them rest longer did not help at all, it was still sticky.


Spread out the dough flat right on the peel, I've used a baking sheet, since I do not have a peel. The dough is still sticky, though it is less sticky at this point, I've got to sprinkle some flours over it. Spray the top of the Fougasse dough with water and sprinkle the topping of your choice. Cut a pattern of slits into the surface of the dough and spread out evenly with your fingers to form the patterns. Again I had problem with this too, as the dough seems to close back, and I've got to let the dough rests for every 5 to 10 minutes or so, and stretch them out again until the holes are visible. Maybe the dough are not ready yet, but it was already almost 9 pm and I was running out of patience.

Bake the Fougasse dough as directed. I've used a baking sheet to shape the Fougase on and baked them directly still on the baking sheet, as I do not have a baking stone and peel. The Cheese Fougasse smells so wonderful when it was baking. 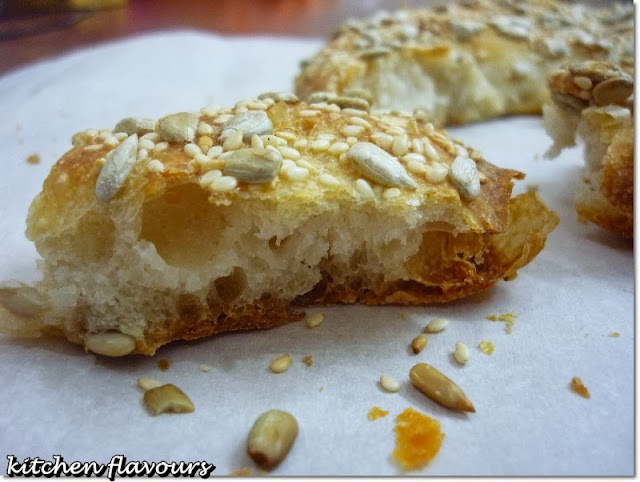 The Seeded Fougasse is simply good! 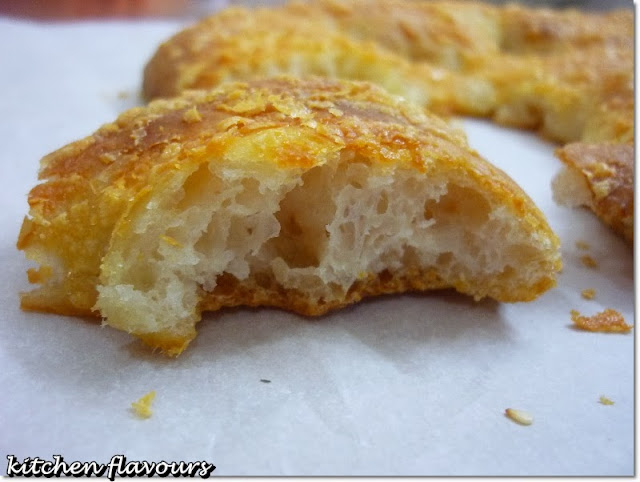 Cheese Fougasse, even better! Utterly irresistible!
All the efforts and time spent on making these Fougasse, definitely paid off!

Between the Seeded Fougasse and Cheese Fougasse, I love this Cheese Fougasse, hands down! Just as the author advised as per the last sentence in the recipe below "eat immediately, or when your mouth can handle the heat". When eaten minutes after baking, while it was still fresh and warm, the crust of the Fougasse is so deliciously crispy (crunch! crunch!) and with chewy, open crumb texture inside, which is what we are looking for, that open-crumb texture!  I can't seem to stop eating the Cheese Fougasse, it was that good!

One thing is, bake these when you plan to eat them immediately right after baking, as they get very chewy and hard as they cool down. The "hard" means that you would need to do some jaw exercising! LOL! Which I did the next morning, when I finished them all up. Which reminds me that the Olive Fougasse I bought from the bakery ages ago, turned really hard too, when it has cooled down. So eat them warm and fresh out of the oven! Do not wait!


In a large mixing bowl, combine your biga and water, and remember to keep that water warm to give your yeast a comfortable atmosphere to grow. (It will help even mixing if you break the biga up into smaller pieces as you add it to the water). Then, dump your flour on top of the liquid ingredients, and mix it by hand for about 30 seconds, until it comes together in a shaggy mass. Don't forget to scrape the bottom and sides of the bowl regularly; you want all of that flour hydrated and don't want to see any dry spots. Set aside in a warm place, at least 80F/25C, for 30 minutes. If you're having trouble finding your warm place, it's time to use your trusty heat lamp.

Sprinkle the yeast and salt on top of the dough and grab a four-finger pinch of the dough and pull. It should stretch out like chunky taffy rather than just tear off. Incorporate the salt and yeast into the dough, continuously pushing the sides of the dough into the middle while turning the bowl. After a minute of this, the dough should be pulling away from the sides of the bowl and developing a bit of a sheen, and you shouldn't feel any crunchy salt (add your olives at this point if you're making Olive Fougasse). This dough will be significantly loose, or wetter, than other dough recipes in this book. Cover the bowl, and put it in your warm place for 30 minutes.

Turn your dough into a lightly floured surface and give it your four-fold. It should make a tight little package and after every fold the dough's volume should increase. It should consistently feel warm and active. Roll the dough over and place it, seam side down, back into the bowl. Repeat every 30 minutes (you'll fold the dough four times in total). After the fourth fold, leave the dough alone to develop volume for the last hour; those bubbles are what will make up the nice, open crumb of your fougasse. You're looking for the dough to be strong but puffy, warm to the touch and able to hold a fingerprint when pressed into the surface. The whole process will take about 3 hours.

When the dough is ready to divide, turn it out onto a well-floured work surface - this dough is a bit sticky, so some extra flour is necessary here. Divide it into four 1-pound/450 gm pieces, and gently preshape each one into a round. Let these pieces rest, covered with a cloth, for at least 1 hour.

While your dough is proofing, place your baking stone on the lowest rack in your oven, and your cast-iron pan on the highest rack. Preheat the oven to 450F/230C. When the dough is totally relaxed and you can press your finger into the surface and the print holds, you're ready to top and bake them.

It's easiest to top your fougasse right on the peel, so you can easily slide them onto your baking stone. If you're concerned about toppings dropping into the oven, line the peel with parchment paper and shape the fougasse on top of that. While the dough is still on the table, pat a loaf out until it is almost completely flat; then transfer it to the peel. Finish patting out until completely flat.

If making Olive Fougasse, no further topping is necessary.

If making Cheese Fougasse, spray your fougasse with water and sprinkle your cheese on top of the loaf, about 1/4 cup/45gm per loaf.

If making Seeded Fougasse, spray your fougasse with water and sprinkle an even layer of seeds on top of the loaf, about 1/4 cup/40gm per loaf. Top with a pinch of fine sea salt.

Grab your pizza wheel, and cut a pattern of slits into the surface of your dough and spread out evenly with your fingers. There is no shortage of traditional fougasse patterns, but I'm big on dedicating a pattern to a flavour and keeping it consistent.

Now, grab three ice cubes from the freezer. Being careful not to keep the oven door open too long and let the heat out, open the oven, slide your fougasse onto the stone, throw the three ice cubes into the cast-iron pan and close the door. A second spritzing of water into the oven is not necessary unless you're making plain fougasse, as the toppings will keep the surface moist. Bake for about 25 minutes, or until the sides of the crust are golden brown and the toppings have a nice, roasted colour (depending on the topping). Eat immediately, or when your mouth can handle the heat.
CB4/14

I'm linking this post to Little Thumbs Up event, where the ingredient for this month is Cheese, organized by Zoe of Bake For Happy Kids and Doreen of My Little Favourite DIY, hosted by Alice of I Love.I Cook.I Bake 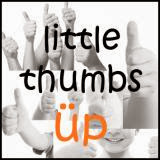 See Ya In The Gumbo hosted by Ms. enPlace

Posted by kitchen flavours at 12:30 PM