"In Quite A Pickle", our theme for this week at I Heart Cooking Clubs (IHCC). I love pickles! Found this recipe in Nigel Slater's book "The Kitchen Diaries II", which he entered on November 26, page 463. He made this pickle for a pork sandwich which he has included in the recipe as well. But I'm only giving the pickle recipe since I did not cook the filling for the sandwich.

For this recipe, Nigel has given a rough amount of each ingredient, so adjust accordingly. 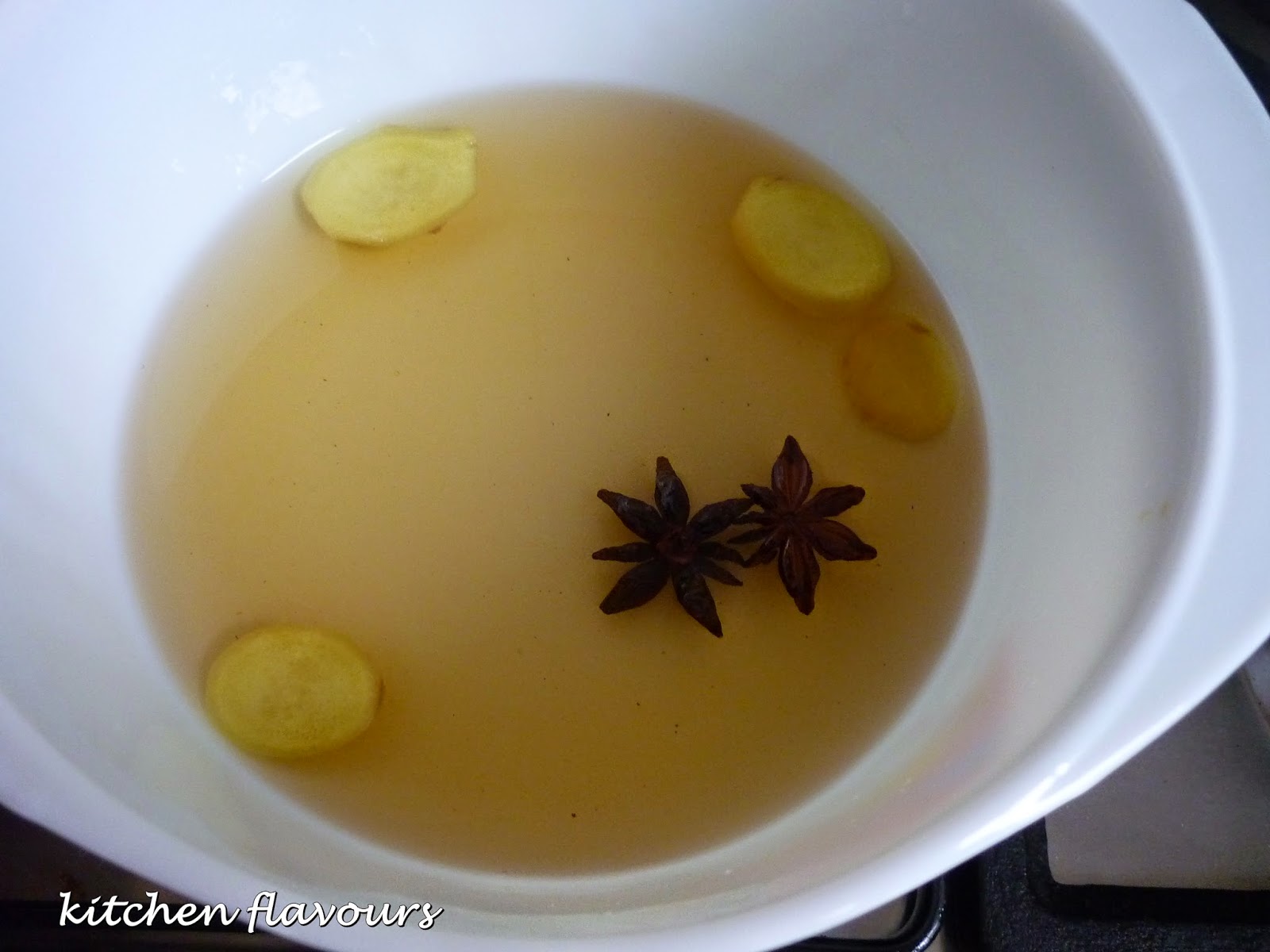 Firstly, the brine is made by heating the rice vinegar and sugar till the sugar melts. He mentioned that he uses a small wineglass of vinegar and equal amount of caster sugar. I do not know how big is "a small wineglass", and since I've used a medium size each of carrot, daikon (to replace the radishes) and cucumber (remove the soft centre core), I used half a cup of rice vinegar and caster sugar. Then 4 slices of fresh ginger and 2 star anise are added in, together with some fish sauce to taste. Take the pan off the heat, and I poured the brine into a heatproof casserole bowl. 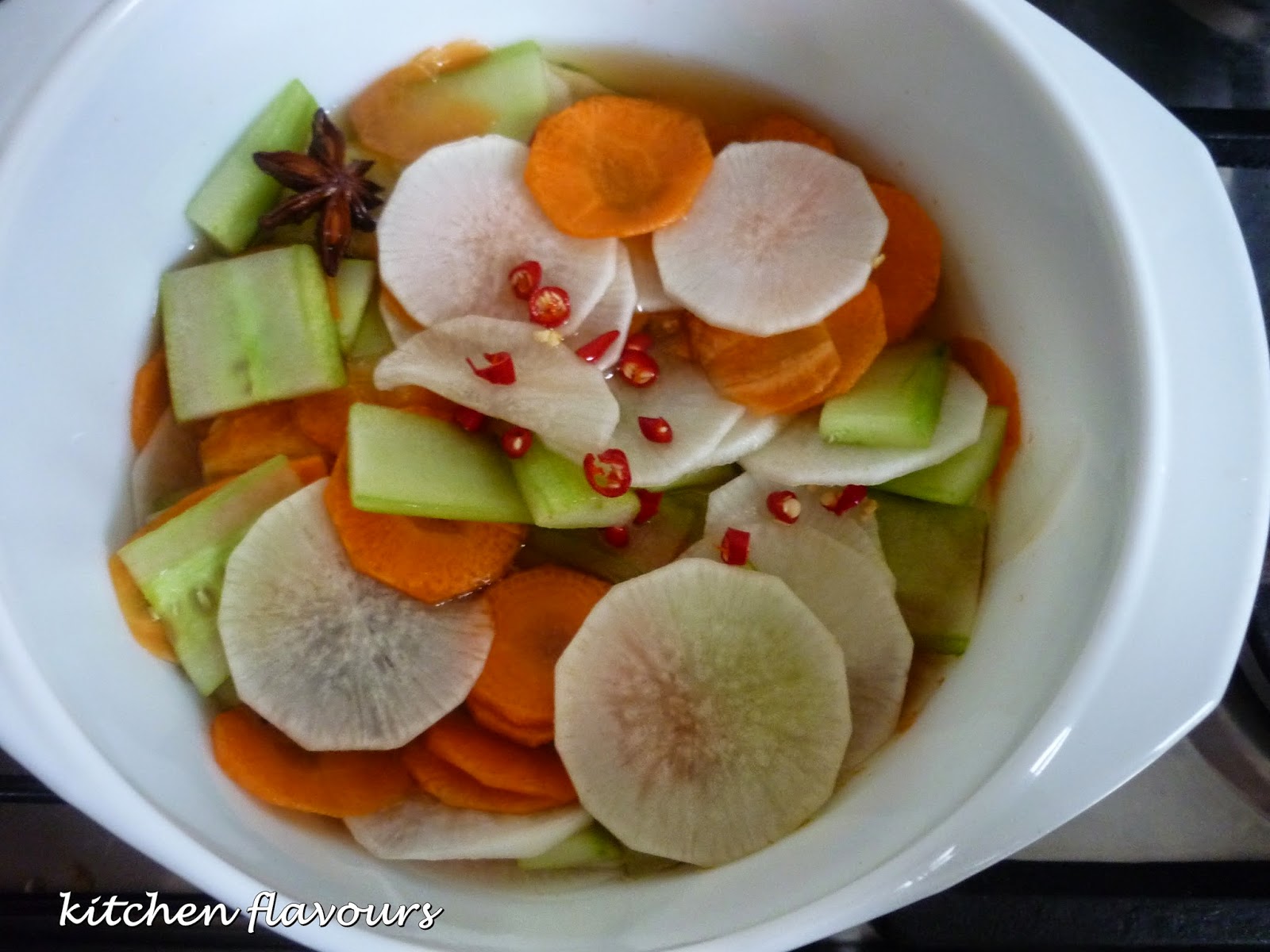 Put all the vegetables in the bowl, mix to combine. I could not help adding 2 small red chillies from my chilli plant which is heavily fruiting right now. Besides, I love a little spiciness for pickles like this. Chop the chillies and add to the veggies. According to Nigel, "After an hour in the mixture, they have become crunchy. Two hours and they are full of zingy bite and refreshing crispness".  Now whenever I make pickles, I would place them right in the refrigerator,  for a couple of hours or overnight before eating, where they will become really crisp and still maintain their crispiness even for days. So instead of leaving the bowl  of pickles on the kitchen counter, I have placed it in the refrigerator. 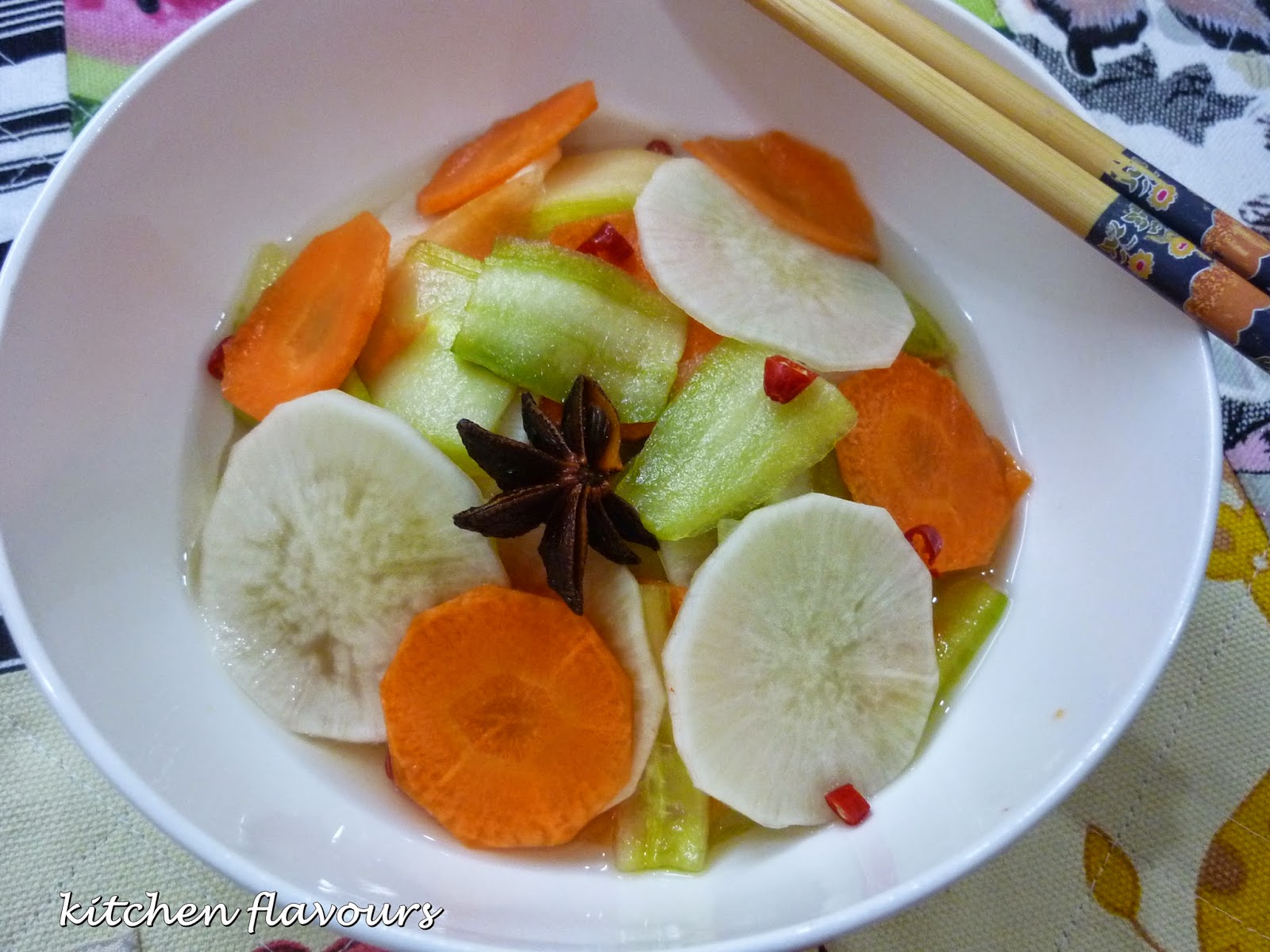 About 4 hours later, I ate the first piece, then the second, then the third....!!!  Oh my! These are so delicious and addictive. You would not stop at just a few pieces. The veggies are so crunchy, sweet, sour and slightly spicy from the red chillies, especially delicious when eaten cold, straight from the refrigerator. These would be great to accompany any roasted meat or sandwiches, though I ate them as a snack! I would definitely make this again!

"This morning I make fresh, hot vegetable pickles. I thinly slice a raw carrot, 4 radishes and a quarter of a cucumber. I bring to the boil a small wineglass of rice wine vinegar and the same of caster sugar. In go 4 slices of raw ginger and 2 star anise. I then add enough Vietnamese fish sauce to make it interesting, about 2 tablespoons (everyone's tolerance to fish sauce is different; keep tasting as you go), put in the vegetables and let the mixture cool. After an hour in the mixture, they have become  crunchy. Two hours and they are full of zingy bite and refreshing crispness."


I'm linking this post with I Heart Cooking Clubs (IHCC), theme for this week "In Quite A Pickle"

Posted by kitchen flavours at 11:14 AM