This week at Tuesdays With Dorie (TWD), the selected recipe is Pear-Cranberry Roll-Up Tart. I do not have any fresh or frozen cranberry, but I do have a pack of frozen blueberries, so I have used that instead. For the filling, I've used Parkham Pears which are ripe and sweet. For the jam, I've used raspberry jam and replaced the ground ginger with ground allspice as I could not find my little jar of ground ginger. I thought I had one around! 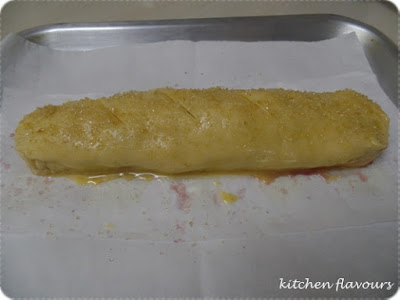 Roll-Up Tart about to go into the oven.

Dorie's galette dough is quite easy to handle for a round tart, or even small little tarts, but I had a little trouble rolling the dough up into a roll-up tart. With the pear and blueberry filling inside, it was not an easy smooth roll! There's one or two tears, which was easily patched up by pinching the dough together to seal. In the end I managed it somehow, though I am unable to tuck the ends of both sides under the dough, as it was getting sticky and soft by then. So I just pinched them together to seal. Brush the top with egg wash and sprinkle with demarara sugar. Make a few slits on top and bake as instructed in the recipe. 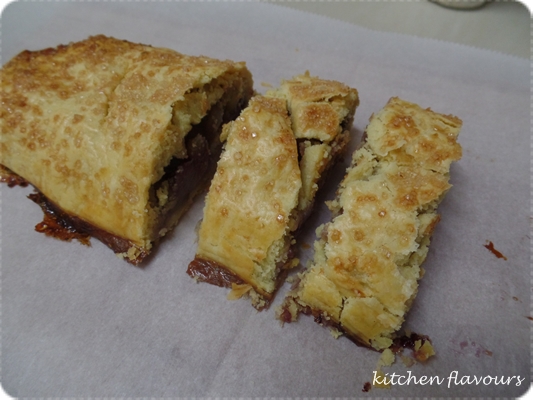 One thing I know for sure is that, Dorie's galette dough makes a flaky, tender, crisp and buttery dough crust. The juices from the filling was bubbling from the sides of the tart instead of from the slits at the top as Dorie indicated while it was baking. When it was done baking and cool to just warm, I sliced the tart and some of the slices break into pieces. 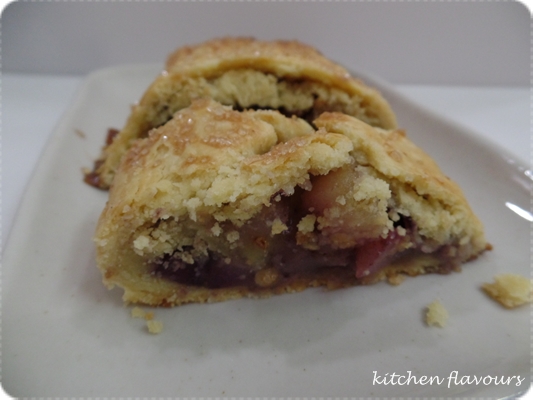 The pear pieces are tinged from the colour of the blueberries. Overall, a very nice tart, but I could not help comparing this to the Apple Pielettes which we baked last month. They are quite similar, one with apple and this with pear, and they both used different jams and spices. I prefer the Apple Pielettes. That being  said, we did enjoy slices of these tart with warm tea.

I'm linking this post with Tuesdays With Dorie (TWD)

Posted by kitchen flavours at 1:39 PM