"Monthly Featured Chef : Giada de Laurentiis", the theme for this week at I Heart Cooking Clubs (IHCC). Once a week, each month, we get the chance to revisit one of IHCC's past featured chefs and cook from their recipes, besides our potluck week.


I've made Chicken Parmesan and it was delicious. The chicken cutlets is rubbed with some herbed oil which is made up of mixing some olive oil, dried rosemary, dried thymes and dried parsley. Brown the chicken cutlets in a large skillet and then marinara sauce is poured over, sprinkled with Parmesan and dots of butter. Bake until cheese melts and chicken is cooked through. That means, if you are using homemade marinara sauce, then you got to prepare the sauce in advance. And I would suggest that you made your own, using Giada's recipe, which is very tasty. 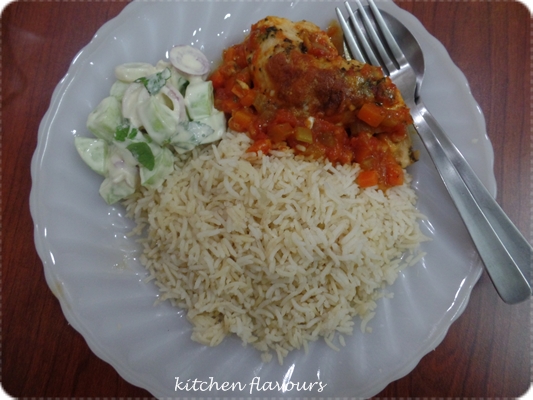 The marinara sauce is pretty easy to make. The only thing is to make sure you chopped up all the veggies (onions, celery and carrots) real fine, as I think mine is a little coarse. I was thinking of pureeing half of the sauce and mix them all together so that it will be a little chunky and saucy, but was really lazy and put that out of my mind as soon as I thought about it! I wish I had though! 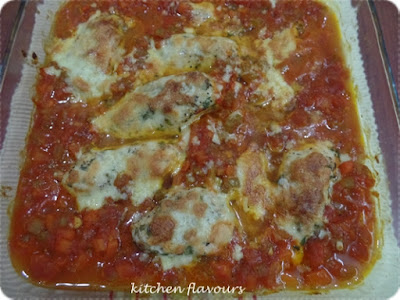 This photo may not look very appetizing, but this dish is delicious. Here I have used a big baking dish to bake the chicken cutlets. After I have browned the chicken, I've placed the pieces in the baking dish, add the marinara sauce and sprinkle with Parmesan over the cutlets. I baked mine about 20 minutes. I only took a few photos, as I have two very hungry teenagers waiting for their dinner! 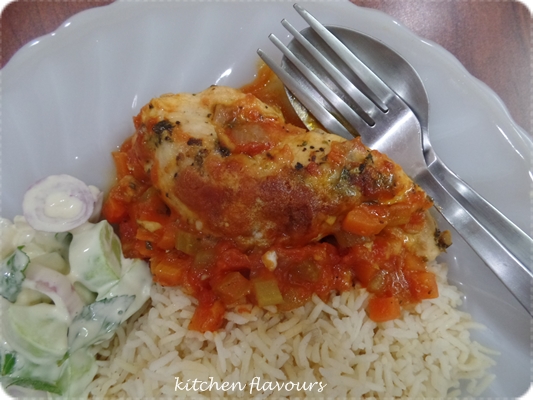 I served the Chicken Parmesan with one of our favourite rice, Baked Butter Rice (a Tessa Kiros recipe), which I have made a few times already. And Cucumber, Onion and Mint Salad (a Jacques Pepin recipe). We love this Chicken Parmesan, and the rice and the salad, satisfied tummies!

Preheat the oven to 500°F. In a small bowl, stir the oil, thyme, rosemary, and parsley together to blend. Brush both sides of the cutlets with the herb oil and sprinkle with the salt and pepper. Heat a large, heavy ovenproof skillet over high heat. Add the cutlets and cook just until browned, about 1 minute per side. Remove from the heat. Spoon the marinara sauce over and around the cutlets. Sprinkle 1 tablespoon of mozzarella over each cutlet, then sprinkle each with 2 teaspoons of Parmesan. Dot the tops with the butter pieces, and bake until the cheese melts and the chicken is cooked through, about 5 minutes. Serve hot.


In a large casserole pot, heat the oil over a medium-high flame. Add the onions and garlic and saute until the onions are translucent, about 10 minutes. Add the celery, carrots, and 1/2 teaspoon of each salt and pepper. Saute until all the vegetables are soft, about 10 minutes. Add the tomatoes and bay leaves, and simmer uncovered over low heat until the sauce thickens, about 1 hour. Remove and discard the bay leaf. Season the sauce with more salt and pepper, to taste. (The sauce can be made 1 day ahead. Cool, then cover and refrigerate. Rewarm over medium heat before using.)
(even though the sauce is at a simmer, it gets thicken and will be a little dry during simmering, so I've added some water a number of times, about  half cup at a time, until the sauce is ready). 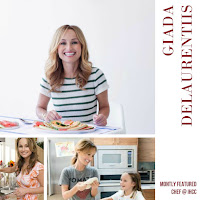 Posted by kitchen flavours at 5:08 PM