It's rewind week at Tuesdays With Dorie (TWD). I've made Dorie's Rum-Drenched Vanilla Cake, recipe from her book, Baking From My Home To Yours. 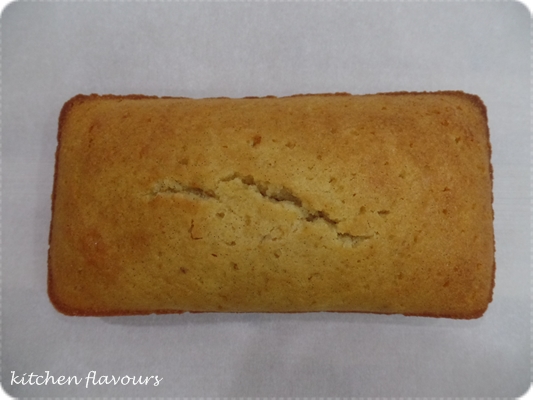 According to Dorie, "the crumb so soft, even and tightly knit - you could mistake it for a Sara Lee pound cake. But what you get here is a flavour Sara Lee can never deliver, one that depends on using the very best vanilla you can find. The first choice is a pair of moist, pliable vanilla beans". Well, I was smiling with glee, as from my recent holiday in Bali, I have bought some vanilla beans that are really fresh. These beans are soft, pliable, moist and oily, unlike the dried ones that I have been using all this while. I stored them in a jar of sugar, and within two days, the sugar was already damp and turning brown, with the oil from the vanilla beans. And the smell is just gorgeous. On top of that, I've also purchased a bottle of dark rum from the duty-free shop at the airport. Perfect! This cake does indeed has a tightly knit soft crumb, similar to those frozen Sara Lee cakes (which I have not eaten in years!). Can you see the fine speckled black seeds of the vanilla. The cake smells really nice with the fragrance from both the vanilla and rum. Each bite is filled with the lovely light crunch of the seeds, and the fragrance of the vanilla really came through beautifully. Rum is used in the cake, as well as in the syrup that is brushed all over cake while still hot. With the amount of rum used, surprisingly it does not overpower the cake at all, but you would noticeably know there's rum. What I got, was a lovely vanilla cake with the fragrance and a light taste of the rum.

The only changes I've made to the recipe which makes two cakes of 8-1/2 x 4-1/2-inch, is to reduce the amount of sugar. Originally, recipe calls for 2-1/3 cups of sugar for the batter, but I've used only 1 cup. For the syrup, I've used only 2 tablespoons of sugar instead of 1/4 cup. And the sweetness turns out just right for both the cake and the syrup. Recipes are not published at TWD, but if you would love to give this a try, you can get the recipe here.

I'm linking this post with Tuesdays With Dorie (TWD), for rewind week.

Posted by kitchen flavours at 10:49 AM