The next featured chef at I Heart Cooking Clubs (IHCC) is Curtis Stone. We shall be cooking from his recipes for the next six months, from 4th April to 2nd October. This week's theme to welcome Curtis Stone to our kitchen is, G'day Curtis!, where we can make any of his recipes to welcome him to our kitchen. If you would like to join us, (please do!), you may get the full details from IHCC's website here. 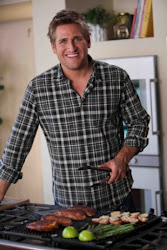 I have tried a few of his recipes before and now, am so looking forward to explore more of his recipes for the next six months. To kick-start on welcoming Curtis Stone to my kitchen, I've made one of his recipes Kale, Chilli & Squid Stir-Fry. 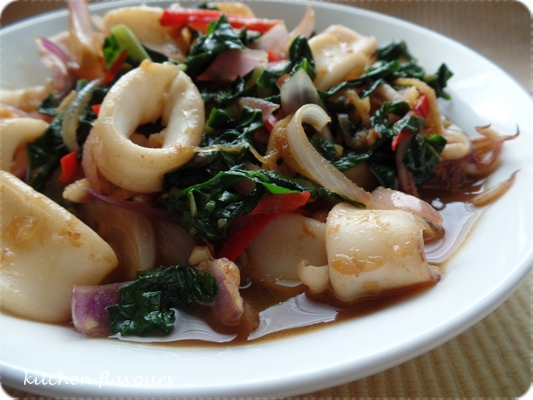 A simple, quick and easy stir-fry dish. I used my homegrown Kale, and it is the first time I'm trying Kale. It is not a common veggie here in Malaysia, and I have never seen Kale being sold at the supermarkets before. Out of the many seeds that I've sowed, only one seedling survived and grow into a healthy plant.

I have forgotten to buy the sugar snap peas, so I have omitted that. And I did not use kecap manis, an ingredient I am not fond of. I have used about 1/4 teaspoon of black soy sauce, for colour. From the ingredients list, there's sliced chillies and garlic used, and that brings to mind where's the ginger! I've added some julienned ginger, as I think ginger always goes well with chillies and garlic, and with any seafood. As for the squids, I cut them into rings, and did not fry them until browned as per the recipe indicated. I stir-fry the squids in one whole batch with a little oil, for about 3-4 minutes until almost cooked. The squids would release all their juices. Scoop everything into a plate, and cook as directed in the recipe, replacing the water in the recipe with the juices accumulated from the squids.


This is a delicious, easy dish, and great eaten as part of a meal with steamed white rice. I'm glad that I have forgotten the sugar snap peas, as I think that it is great without it. The only thing is, the next time I will add more Kale, as we love it! 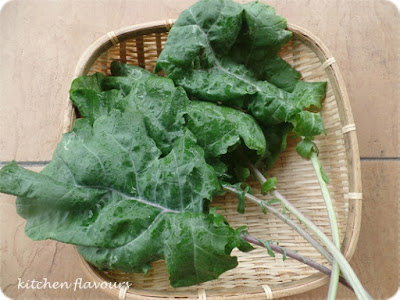 Kale leaves from my container garden. Beautiful fresh green! I have seen so many recipes using Kale that I was pretty curious, which led me to buy the seeds and grow this veggie. This is the first time we've tried Kale, and we love it. I'll be sowing the rest of the seeds soon.

I'm linking this post with I Heart Cooking Clubs (IHCC), theme for this week,
G'day Curtis! 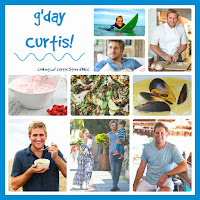 Posted by kitchen flavours at 12:02 AM