Cook The Book Fridays, a group of foodie bloggers, is currently cooking from David Lebovitz's cookbook, My Paris Kitchen. This week's assignment is Ham, Blue Cheese and Pear Quiche, and it is extra special this week, because CtBF is participating in Food Revolution Day. As everyone knows, Food Revolution is created by Jamie Oliver.  A food movement which aims to inspire people to learn about food and how to cook good, honest and affordable food.

This week, CtBF has selected this quiche recipe, as Mardi Michels, who is the Food Revolution Ambassador for Canada, says, " we're all going to be cooking the dish we've deemed a "must know" starter French recipe - QUICHE!". 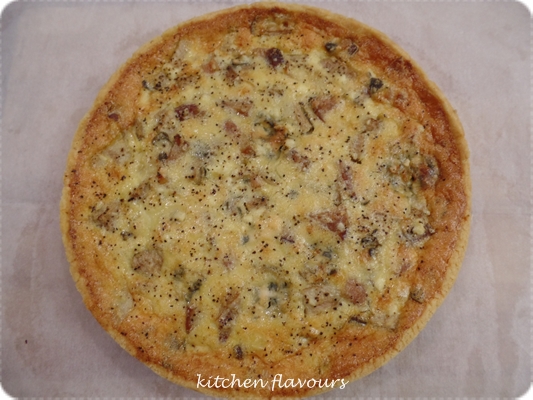 We love quiche and I've made them many times, but have never made the pastry with a mixture of flour and cornmeal before. I've always use a tart pan to bake quiche, in this recipe, DL has indicated to use a springform pan instead, so I figured that the filling for this quiche must be quite thick compared to others that I've made, especially so when I've read that the dough is to be pressed halfway up the sides of a springform pan.  The springform pan that I've used is 9" diameter, and I did not wrap the pan with aluminium foil around the outside, since it is going to be placed on a rimmed baking sheet before baking. The dough breaks in some places when I transferred the rolled dough into the pan, but the tears are easily patched up by using some of the dough pinched from the sides to cover the tears.


I've made a few changes to the amount of ingredients used, as folllows :
For the crust : use 1/4 tsp of salt instead of 1/2 tsp. The pastry needed less than 1 egg for it to come together. I beat the egg lightly in a small bowl and added a tablespoon at a time until the dough comes together. There's about slightly more than a tablespoon of the egg left.
For the filling : 1 cup heavy cream instead of 1-1/2 cups, 5 ounces cream cheese instead of 8 ounces, 100gm crumbled blue cheese instead of 150gm, 4 large eggs only and did not include the extra 2 egg yolks.
Use fresh oregano leaves from my garden pot, and bake the quiche for 70 minutes. 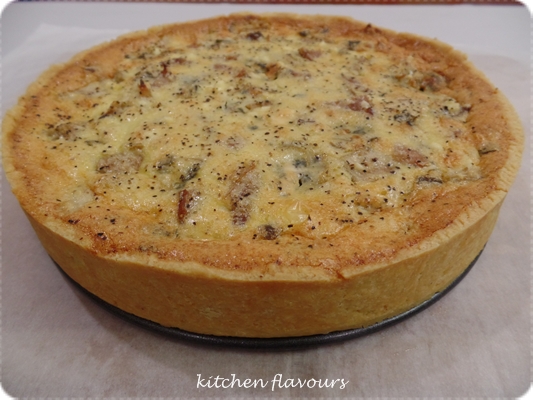 The amount of filling fills the pan exactly to the level of the dough top. I sprinkled some black pepper over before baking. 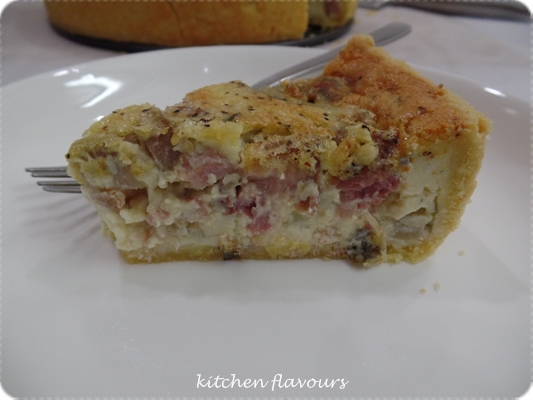 I was afraid that the taste of the blue cheese might be too strong. But the taste kinda mellows out during baking, mixed with all the other flavours in the filling. The pear makes an interesting addition, with a nice light crunch, and would not have guessed that there's pears in the quiche. With cream cheese and heavy cream in the filling, this is one very rich quiche. And very, very filling! Nice quiche, but not our favourite. As for the cornmeal crust, I like it.  Tender, flaky, and buttery.

To know more about Food Revolution, click on the following link :

Stop by Cook The Book Fridays to see everyone's take on this quiche.