Even though this is called Spicy Thai Fried Rice, it is not at all spicy. But it is delicious and makes a satisfying lunch for a hungry tummy. 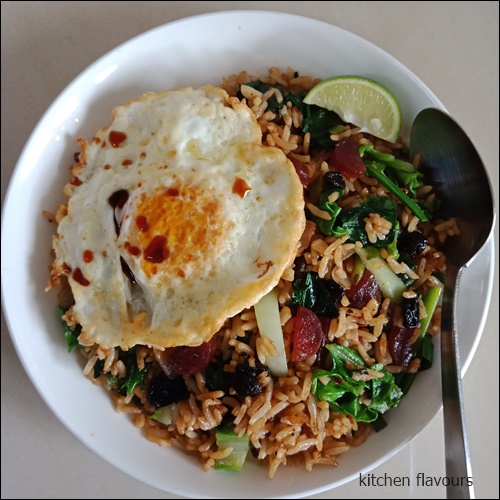 The recipe uses chorizo sausages, but I've substitute with some Chinese sausages instead. And because the Chinese sausages are not spicy, I've added a tablespoon of chilli flakes. The greens that I've used are baby spinach and napa cabbage. Instead of using the eggs to add to the rice stir-fry, I have fried the eggs separately to serve with the rice on top, with a dash of soy sauce. There's a half cup of black raisins in there, and I love it. It reminds me of some pilaf rice I ate before. This plate of fried rice makes such a delicious lunch, especially topped with the fried egg.

Posted by kitchen flavours at 10:16 PM