"March Potluck", time for our monthly potluck week at I Heart Cooking Clubs (IHCC).  And for this week, I'm cooking with Jamie Oliver, with my selected dish, Vindaloo. 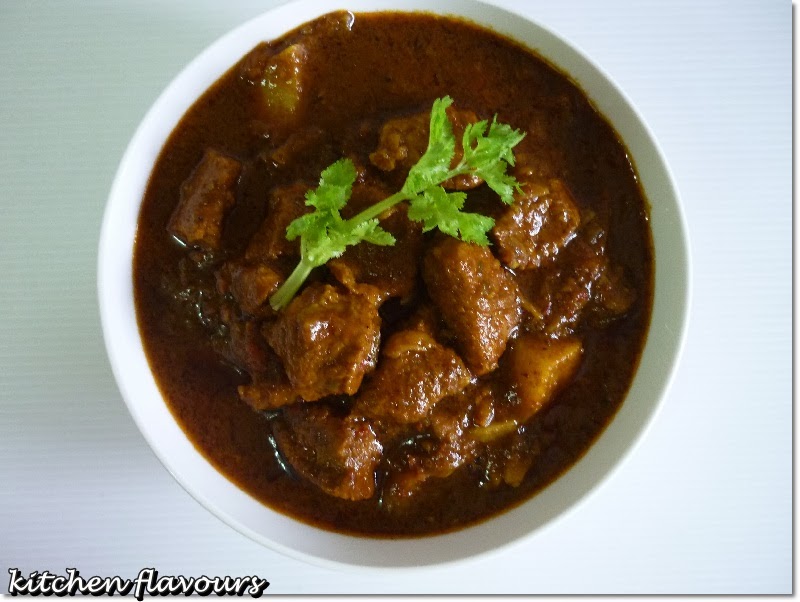 Jamie has given the option of using Patak's Vindaloo paste or make your own by using his Vindaloo paste recipe. I have opted to make my own, which is much cheaper and very easy to make. Whole spices are toasted and process to a powder. They are then processed in a food processor along with the rest of the paste ingredients until the paste is smooth.


I have cooked about a kilogram of pork meat, and have increased all the spices in the recipes by half. The recipe is meant to cook about 800gm of meat. And go easy on the balsamic vinegar, start with a lesser amount first. I 've used about 1/4 cup of balsamic vinegar in total and the sourness is just right. From the recipe, the pork and the vindaloo paste are to be added to the pot at the same time, so I have marinated the pork meat with the vindaloo paste and keep in the refrigerator for about half an hour, then proceed with the instructions in the recipe. 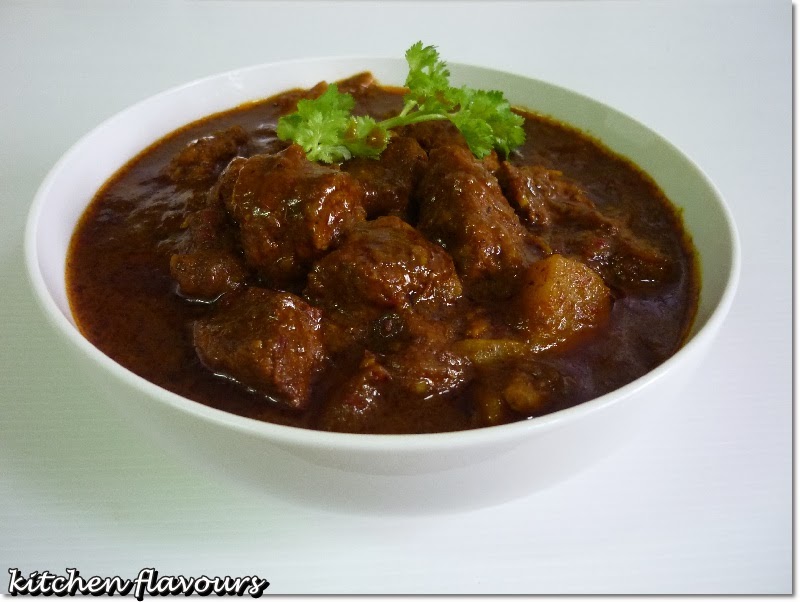 I've used the amount of water stated in the recipe, which is 1-2/3 cups and there's no need for additional water at all during the braising, keep checking and stirring often to prevent the vindaloo from sticking to the pot. By the time the dish is done, the vindaloo has a fair amount of lovely thick gravy. 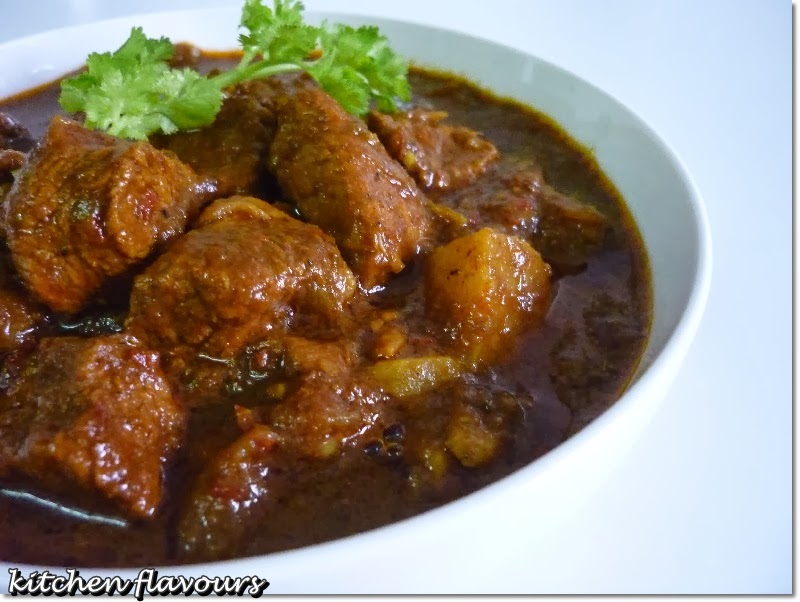 We ate this with jasmine rice. How does the family rate? This is too spicy for hubby, he was sweating while eating the Pork Vindaloo with rice! And my son, he loves it, even though it is too hot for him too. He insists on eating this dish, with a big glass of water next to his plate. The daughter, tried a piece, as she was recovering from a cough. As for me, well, it is quite delicious, and since I'm a person who can take a fair amount of heat, this dish is not all that spicy, but moderately so. The spiciness comes mostly from the black pepper and the chillies, though I can feel that mostly the heat is from the black pepper. For a milder taste, reduce the amount for these two ingredients. There was some leftovers, and the next day, in spite of the spiciness, both son and hubby ask for it again! And it tastes much better the next day, as with most curries.

Update on our current weather, it rained heavily two days ago, and again yesterday! Which was a relief to everyone! The haze has significantly reduced and the weather is a little cooler. I got soaked when fetching my daughter yesterday, from the heavy downpour, but I don't mind! Let it rain! Much as we welcome the rain, most importantly, hopefully it rained at the water catchment areas and over at the dams, as the water level has reached a critical stage, and we are experiencing water rationing at the moment. Like today, in my area, we have dry taps which will last until tomorrow. No cooking or baking! :o(

To cook your curry
Get a large casserole-type pan on a medium to high heat and add a couple of lugs of peanut oil and the butter. Add the onions, garlic, chile, ginger, and cilantro stalks and cook for 10 minutes, until softened and golden. Add the pork and the curry paste. Stir well to coat everything with the paste and season with salt and pepper. Add the tomatoes, balsamic vinegar, honey and about 1-2/3 cups of water; enough to cover everything, and stir again. Bring to a boil, then turn the heat down and simmer for 45 minutes with the lid on. Check the curry regularly to make sure it's not sticking to the pan, and add extra water if necessary. Only when the meat is tender and cooked, taste and season with salt and pepper - please season carefully. (Already spicy, there's no need to season with more pepper!)

To serve your curry
Serve with fluffy rice and with a few spoonfuls of natural yoghurt dolloped on top. Sprinkle over the cilantro leaves and serve with lemon wedges for squeezing over.

To make the vindaloo paste :

First peel the garlic and ginger. Put a frying pan on a medium to high heat and add the spices for toasting to the dry pan. Lightly toast them for a few minutes until golden brown and smelling delicious, then remove the pan from the heat. Add the toasted spices to a pestle and mortar and grind until fine, or put them into a food processor and whiz to a powder. Either way, when you've ground them, whiz the toasted spices in a food processor with the rest of the ingredients until you have a smooth paste.

To view the potluck dishes that everyone has made, do visit I Heart Cooking Clubs (IHCC). 
I'm linking this post to Cook Like A Star, All-Stars Anniversary Party, hosted by Zoe of Bake For Happy Kids, Mich of Piece of Cake and Joyce of Kitchen Flavours.
(click on any of the hostess blog for further info and to link your posts)

Posted by kitchen flavours at 10:43 AM