"Eating Around The Globe", is our theme for this week at I Heart Cooking Clubs (IHCC). I'm bringing my passport to Japan this week, with Nigel Slater's Gyoza (Japanese Pork and Cabbage Dumplings). 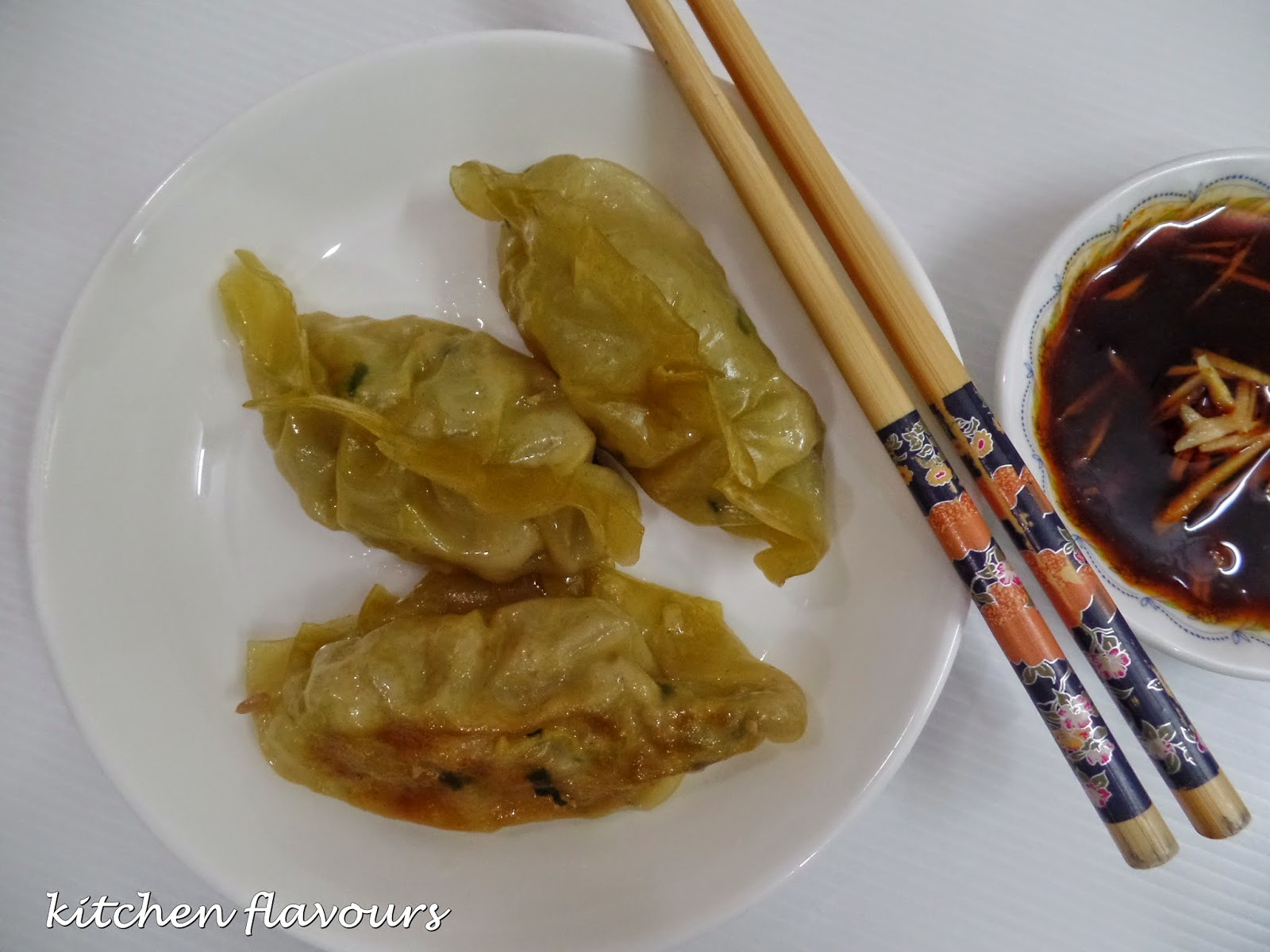 Note : According to the book, the green leafy parts of the Chinese cabbage are shredded very finely, put in a colander and sprinkle heavily with salt. Let rest for 20 minutes, rinse and squeezed dry. However, it does not state in the recipe which step should the cabbages be added in. So I have added in the cabbages after stir-frying the minced pork for a couple of minutes. 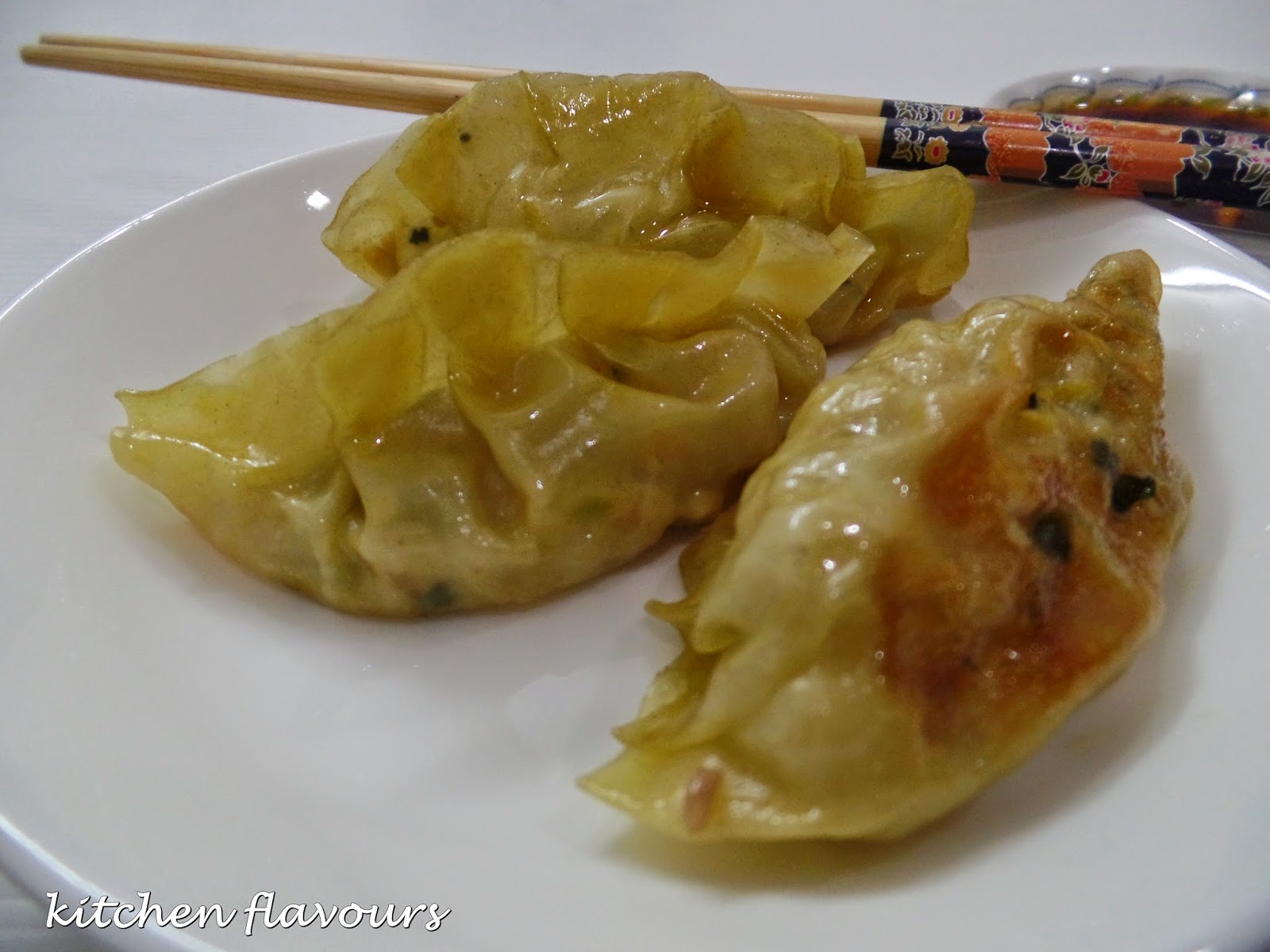 I have omitted the sugar in the filling, even though it calls for just a pinch, I omit it altogether. The filling is tasty enough without the sugar. And I have used more minced pork than the recipe, about 380gm and this amount gave me 22 pieces of gyozas. 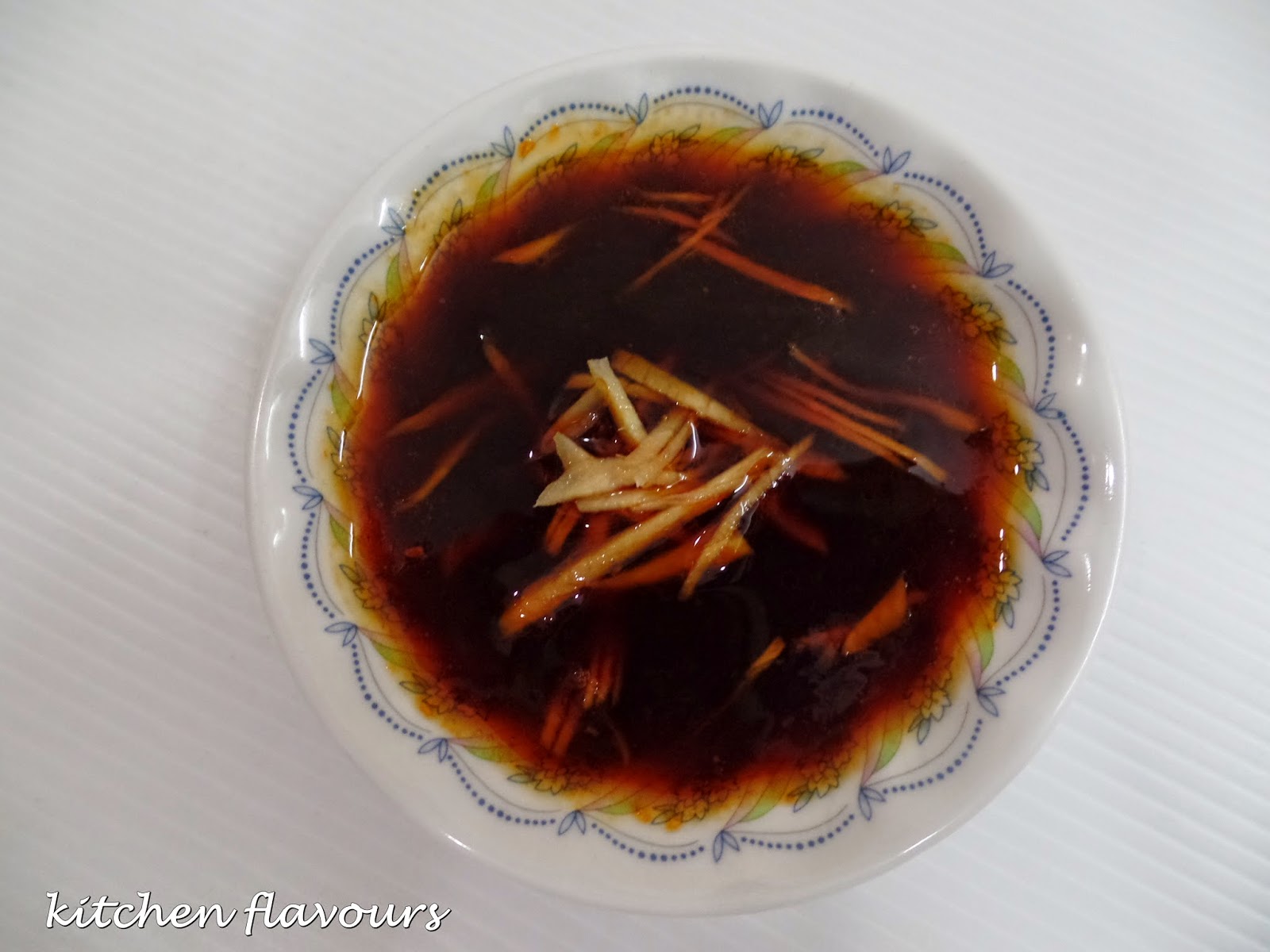 The gyozas are served with the dip, and I really like this dip a lot! Though I did make a few adjustments to it. Firstly, according to the book, this dip is supposed to be sweet, sharp and salty. I find that the sauce is sour without much taste at all. And how can it be salty, when the recipe for the dip, does not contain anything that is salty. And I've noticed that the recipe calls for 2 tablespoons of black soy sauce and none whatsoever of light soy sauce (maybe an error?) . So I have added in a little more and less, of this and that, and my changes are : an additional teaspoon of chilli sauce, just a half teaspoon of black soy sauce (instead of the original 2 tablespoons, I might omit it altogether if I make this again the next time), an addition of 1 to 1-1/2 tablespoons of light soy sauce, an additional 1-1/2 to 2 tablespoons of sugar to counter-balance the sourness from the vinegar. And I have added in some thinly julienned ginger just before serving, as I love the ginger in the dip, which is usually served whenever I had gyoza at any restaurants.
Adjust the sweetness, sourness and saltiness to your own taste. This dip is really good, it finally had that "sweet, sharp and salty" combination that Nigel mentioned, perfect with these gyozas!


Put the ingredients for the dip into a small saucepan and bring to the boil. Simmer for two or three minutes, then leave to cool. It should be sweet, sharp and salty.

Shred the cabbage very finely, then put it in a colander, place on a plate, sprinkle heavily with salt and leave for twenty minutes. This will help it to soften. Rinse briefly, then squeeze out the moisture with your fist.
Finely chop the spring onions, put them in a frying pan with the sesame oil and let them softer over a low to moderate heat. Peel and finely crush the garlic and add to the pan together with the grated ginger and some ground white pepper. It is worth remembering that white pepper is hotter than black.
Add the minced pork to the mixture, turn the heat up slightly and fry till the meat is pale gold, a matter of three or four minutes. (I have added in the squeezed cabbages about two or three minutes after frying the minced pork). Add the sugar, chives and three or four drops of soy sauce. Let the mixture cool.
Place a dumpling wrapper on the work surface and put 2 teaspoons of the pork mixture in the centre of it. Dampen the edge of the wrapper with water, then fold the bundle in half to give a semi circle and press firmly to seal, crimping the dough as you go with your finger and thumb. Set aside and repeat with the remaining wrappers and filling.
Warm a thin layer of oil over a low to moderate heat in a shallow pan to which you have a lid. Place the dumplings in the pan so their crimped edge stands uppermost. Let the bottoms colour lightly; they should be pale amber. Pour in the water, cover the pan with a lid and leave for five minutes. Remove the lid and let the water boil for a minute or two, till it has evaporated. Serve the gyoza with the dip.
Makes about 20, enough for 4.

I'm linking this post to I Heart Cooking Clubs (IHCC), the theme for this week "Eating Around The Globe" 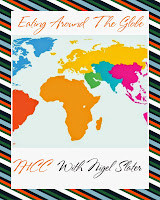 Posted by kitchen flavours at 12:03 AM