"March  Potluck", the theme for this week at I Heart Cooking Clubs (IHCC). For our Potluck week, we are free to cook with any of our featured chefs at IHCC. And I've chosen to cook with Diana Henry, the current featured chef. We only have one more week to go, before we start with the next selected chef, Jacques Pepin, on April 6th.


Back in November, I have made one of Diana Henry's fish recipe, Spanish Baked Fish, and it was so good that I've made it one more time after that. Even now, I have a large piece of sea bass in my freezer, as I'm planning to make it again sometime this week. Yes, we love this dish a lot!

Diana Henry has quite a collection of interesting fish recipes. And this Sea Bass with Lebanese Herb Sauce is one of them. Seeing how much my family love her Spanish Baked Fish, I decided to try this recipe for dinner. Well, just as I've expected, this is a delicious dish. 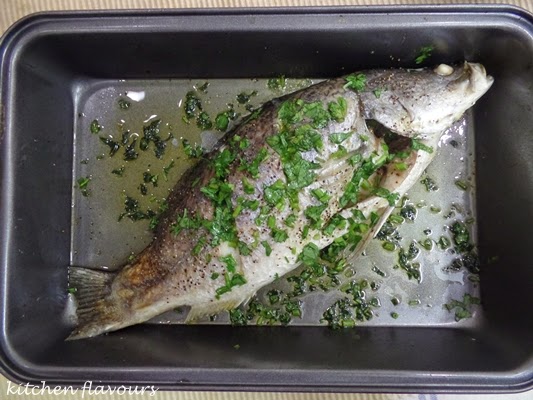 Another quick and easy dish to cook. The sea bass is cleaned, gutted, scaled and make three slashes on each side of the fish. Brush the inside and out with olive oil and season with salt and pepper. Put in a roasting pan and bake 8 minutes, for a small fish. The sea bass I used is quite large, so I baked it for about 25 minutes. Sprinkle with chopped parsley and cilantro and bake for a further 5 minutes or until the fish is fully cooked. Serve it immediately with the herb sauce. 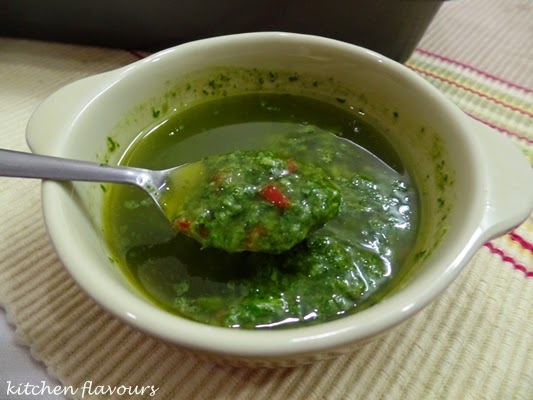 For the herb sauce, I made some adjustments to the quantity of the herbs. Diana Henry has used a tablespoon each of chopped fresh flat-leaf parsley, chopped fresh mint leaves, and 2 tablespoons of chopped fresh cilantro. I know that my family loves more sauces in just about anything! So I have used more than the recipe calls for, about half a cup of flat-leaf parsley, a quarter cup of mint leaves and a whole cup of chopped fresh cilantro. Everything goes into the blender with the rest of the sauce ingredients, except the chopped fresh chilli which is to be added just before serving. Another adjustment I made was, to reduce the amount of olive oil from 1 cup to 1/3 cup and I feel that it was enough. Adjust the seasoning with salt and pepper, as needed. Pour into a bowl, add in the chopped fresh chilli and serve immediately with the baked fish. 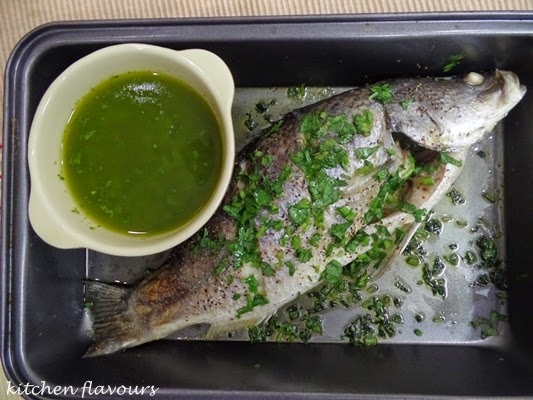 A very tasty dish. I'm so glad I've made more sauce! Very good eaten with the tender and flaky fish! I asked my family which fish dish they prefer, the Spanish Baked Fish or this? According to them both are delicious, but they would not mind having the Spanish Baked Fish again. Obviously they have a favourite! :)
My daughter seems to love this herby sauce. She says it is really delicious eaten with white rice, and she is right!


I'm linking this post with I Heart Cooking Clubs (IHCC), theme for this week "March Potluck" 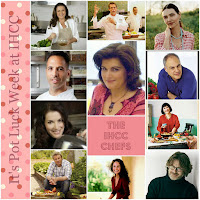