I bought some Fuji apples a few weeks ago, and maybe I bought too many! Got to use them up and what better and delicious way than an apple pie? In this case, it's hand pies! Recipe is from Home Baked Comfort by Kim Laidlaw, and so far I have had success with all the recipes I've tried. 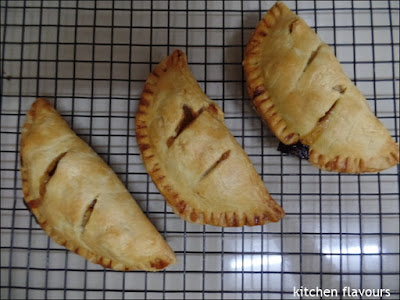 I started by making the flaky pie dough in the morning, and by late afternoon, we have warm fragrant apple pie for tea time treat. Fuji apples, it's one of my favourite apples to use for baking. The apples are peeled, cored and cut into small cubes, then mixed with some brown sugar, ground cinnamon, lemon juice and a tablespoon of flour. Once the dough is done, it is rolled out and cut out into 6 or 7 inches rounds, using a bowl as a guide. Brush some egg mixture along the border of half of each rounds. Scoop some filling and place in the centre of the round, bring the sides of the dough together and press to seal. Use a fork to press the borders. Brush the top of the dough with more egg mixture. The recipe did not say anything about slashing the top, but I made a couple of slashes, to allow steam to escape during baking. I've used a 5-1/2 inch bowl as a guide to cut out the rounds and the dough yields 9 rounds for 9 pies.

Bake until golden brown, and the juices are bubbling and oozing from the slashes. 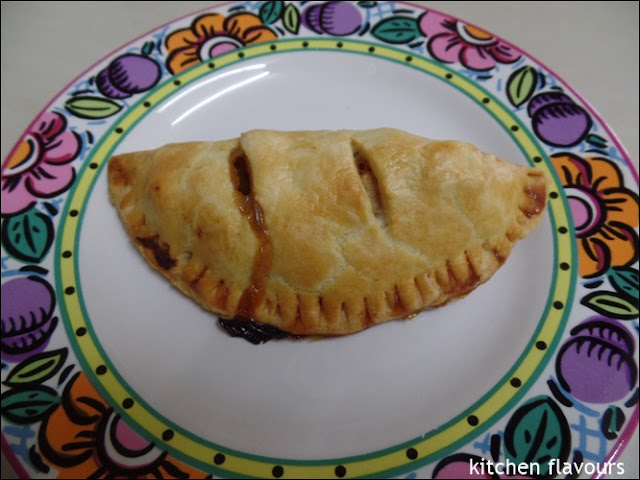 Freshly baked, still warm, about to be served! 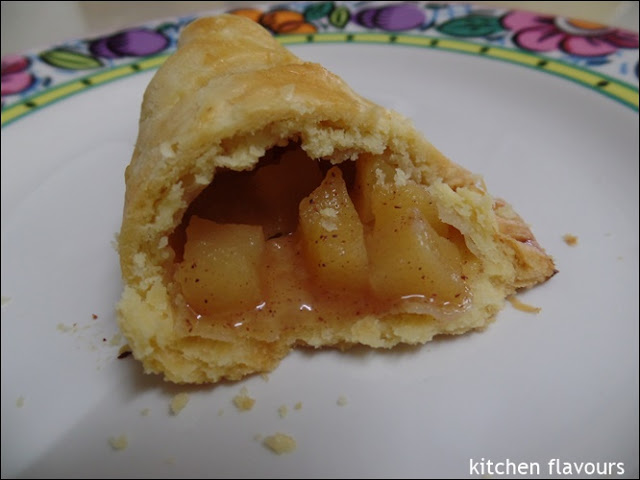 Yum! The pie crust is flaky, buttery and crisp tender. Juicy soft apple filling and fragrant from the cinnamon. There's a vanilla glaze which is drizzled over the baked pies, (given in the recipe), but I have omitted the glaze. I let the baked pie rest for 10 to 15 minutes before eating. So good when eating the still warm pie, but be careful when biting into the filling, it's hot! We did not miss the glaze at all, the pie is very good even without it. With a mug of warm tea, this is the perfect afternoon snack.


Prepare the flaky pie dough and chill as directed.
Position a rack in the middle of the oven and preheat to 375F (190C). Line a rimmed baking sheet with parchment paper.
On a lightly floured work surface, roll out the dough into a large circle about 1/8 inch (3mm) thick. Using an inverted bowl, cut out eight 6 or 7-inch (15 or 18-cm) circles of dough. You'll have to gather the scraps and reroll the dough a few times. Alternatively, you can divide the dough into 3 equal pieces and roll each piece into a circle. Place the circles on the prepared sheet and refrigerate for about 10 minutes.
In a bowl, toss together the apple chunks, lemon juice, brown sugar, cinnamon, and flour. Remove the dough circles from the refrigerator and place in an even layer on your work surface. Brush a thin layer of the egg wash around the border of half of each circle. Divide the filling among the dough circles, placing it in the middle of each circle. Fold the dough over the filling to make a half moon and press the edges with a fork to seal. Brush the tops with the remaining egg wash.
Bake until the hand pies are puffed and golden brown and oozing juice, 25-30 minutes. Set aside to cool on a wire rack.
To make the glaze, in a small bowl, whisk together the confectioners' sugar, vanilla and 1 tablespoon water. Brush the glaze over the pies as soon as they come out of the oven while they are hot.
Serve the pies warm or at room temperature.


In the bowl of a food processor, stir together the flour, salt, and sugar. Sprinkle the butter over the top and pulse for a few seconds, or just until the butter is slightly broken up into the flour but still in visible pieces. Evenly sprinkle the water over the flour mixture, then process just until the mixture starts to come together. Dump the dough onto a work surface, press it together, then divide it in half. Press each half into a disk, then place the disks in a large lock-up plastic bag. Refrigerate the dough for 30 minutes or up to 1 day, or freeze for up to 1 month.

Cookbook Countdown is a monthly cooking/baking event, which I'm co-hosting with Emily's Cooking (Makan2) Foray.  Everyone is welcome to join us. How does it work? To summarize, you may select a cookbook from your own cookbook collection, to cook or bake from each month. That selected book shall be your cookbook of the month. You may cook any recipes and as many recipes as you want from your selected book of the month. This is a fabulous way of using your cookbooks at least once! For more information on how to join Cookbook Countdown, please click here.

Grab a cookbook and join us!

Posted by kitchen flavours at 8:49 PM