This week at I Heart Cooking Clubs, we are making Buddha Bowls!. Heidi Swanson-Inspired Buddha Bowls, a one bowl meal with several added components like grains, beans, veggies, nuts, etc... I've made her Kale Rice Bowl, to use some kale which I've harvested from my garden pot.


Kale Rice Bowl is a one bowl meal which is really some cooked rice stir-fry with sauteed kale, and is topped with several toppings as recommended by Heidi Swanson. I have made some slight changes. 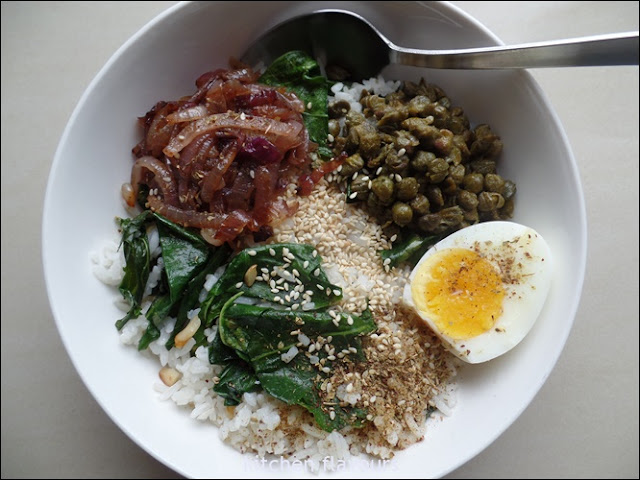 Firstly, instead of brown rice, I have used some leftover jasmine rice. The recipe did not use any garlic, but I have used three large garlic cloves, peeled and chopped, fry in a little oil until light brown, then add in the shredded kale. Stir-fry for a minute or two until wilted, add some salt and stir in the cooked cold rice. Fry for a few minutes until the rice is heated through and taste for seasoning, adding more salt if necessary. Scoop into a bowl and top with the suggested toppings.


The toppings I've used are, capers which are pan-fried in butter until blistered. I love this! Instead of a poached egg, I made soft hard-boiled eggs. I've made some caramelized onions seasoned lightly with a pinch of salt.  There's toasted sesame seeds and zaatar, a wonderful Middle Eastern spice blend, to sprinkle over. I've however, omitted the yoghurt, simply because I had none left. 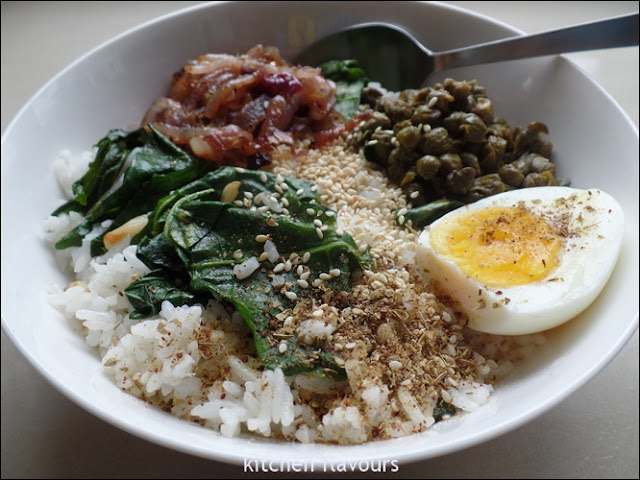 This is delicious. I love everything in this bowl! The capers are really nice fried until blistered in butter, yum! Caramelized onions, I'm so glad that I've made these, as I love caramelized onions! The soft hard-boiled eggs are perfect for this rice meal, the sesame seeds added some light nutty crunch but I would not miss it if it's not there. But the star of this one bowl meal has got to be the spice blend, Zaatar! No wonder Heidi recommends to use lots of Zaatar! It really adds a delicious flavour to the rice meal. I sprinkled more zaatar in my bowl as I was eating the rice. Same goes with my son! I kept a bowl of this rice meal for my daughter who wasn't in, but she came back late, hours later. So I reheated it by stir-frying everything together with some zaatar added in, and she said this is a delicious "fried rice", yum!

I'll be cooking this again. A very versatile rice meal, you can use any other veggie you like and try with a different spice blend as suggested by Heidi. One thing I must put on my grocery list, a new jar of Zaatar!


In a large skillet or pot, heat the olive oil over medium heat. Add the kale and a couple pinches of salt. Saute until the kale softens a bit and brightens, just a minute or so. Stir in the rice, and cook until the rice is hot. If your rice is on the dry side, you might have to add a small splash of water.
Serve the kale rice topped with (preferably) all of the following : the capers, poached egg, yoghurt drizzled with olive oil, and plenty of zaatar.

I'm linking this post with I Heart Cooking Clubs (IHCC), theme for this week
Buddha Bowl! 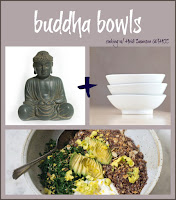 Posted by kitchen flavours at 1:05 AM