When I think of century eggs or hard-boiled eggs, pickled ginger would come to mind.  When I think of pickled ginger, century eggs or hard-boiled eggs would come to mind.  Am I making any sense?  I do? Great!  Yup, you got it right!  They are made for each other!  Ever tried pickled ginger before?  Pickled ginger is made by using the young ginger, the old ginger are too fibrous and extremely hot, sometimes even bitter.  The young ginger are sliced very  thinly, marinate with some salt and then soaked in the vinegar and sugar solution.  This is usually left for at least 5 days in the refrigerator for the flavours to develop. There will be a light delicious crunch.


Pickled ginger can be eaten as it is, as garnishing, in stir-fries and very delicious served with roasted meat.  Try it in sandwiches, burgers or chop it to smaller pieces and mix into salads. 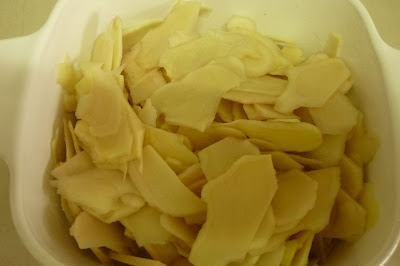 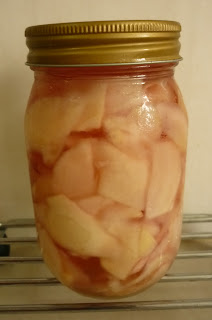 It will naturally turn to a nice light pinkish shade due to the reaction of the hot vinegar and the young ginger. 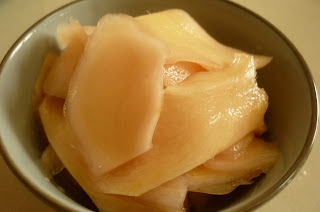 Yummy, fresh from the fridge, cool, crunchy with a tinge of sourness from the vinegar, sweetness from the sugar and a little heat from the ginger!
It's time to serve with some hard-boiled eggs and century eggs.  I do not think that the hard-boiled eggs need any introduction!  As for  the century eggs, this is interesting!
Have you eaten century eggs before, seen or smell it?  Century eggs are usually made from duck eggs, sometimes chicken eggs or quail eggs. Century eggs are also known as preserved egg, hundred-year egg, thousand-year egg and millennium egg. Wow, it does sounds old, doesn't it?   It is a Chinese cuisine and is preserved in a mixture of clay, ash, salt, lime and rice hulls. This may take from several weeks to several months depends on the method of preservation.  I know what you must be thinking! Yulks!  I thought so too when I was small, but I have learn to appreciate and love it as I get older! It is really an acquired taste. The yolks are  dark greenish-brown creamy-like texture with a strong odour of sulphur and ammonia.  I used to cover my nose when my mum ate this when I was a little girl! The whites will be dark-brown, jelly-like texture and has very little flavour.  It can be eaten as it is, usually it is served in quarters, with a few slices of pickled ginger on each slice.  It can also be used in cooking Chinese congee, stir-fries and as an additional ingredients in some soups.  My daughter seems to like this. My son has a rather interesting description when he ate this, he says  "the white is like tasteless jelly, while the yolk is like putting an oyster in the mouth, creamy and soft"! 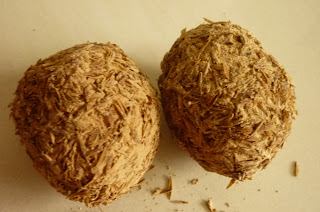 Century eggs, bought from the market 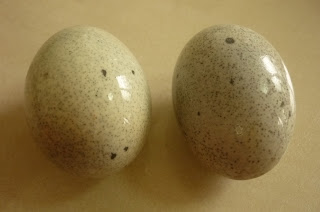 After cleaning off the coating of the rice hulls, the eggs with shells still intact 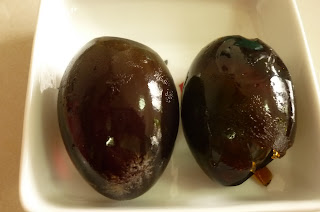 This is how the eggs look like, willing to try, anyone?? 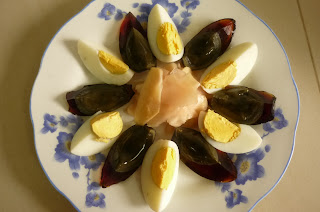 Served together with some hard-boiled eggs, with the pickled ginger 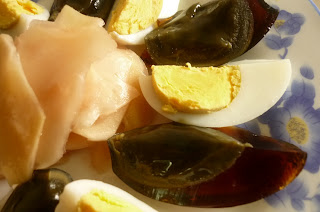 Yummy!
Pickle Ginger
(about 2 of 500ml sized jars)
Ingredients :
500gm young ginger
2 tbsp salt
800ml rice vinegar
400gm sugar
Method :
"Would YOU dare to try the century egg, maybe just a slice?"
There will be a  "Culinary Smackdown Battle Chile October 2010" at "At Home With Rebecka". Go on, get some hot stuff smoking and head on down to Rebecka's.  Please do drop by her wonderful blog for more info.  Have fun!
Posted by kitchen flavours at 12:46 AM