Pork Stew With Potatoes And Rosemary

This delicious pork stew recipe is from Martha Stewart's cookbook, One Pot. Potatoes and Rosemary is one of the four variations that was given in the book.

There's 2 whole cups of red wine in the stew, with 2 cups of chicken stock. I have added about a cup of cooked black-eyed beans. Did not have any fresh button mushrooms, so I"ve used canned ones instead. The two sprigs of rosemary are from my garden pot. The pork pieces are first browned in a little oil, then remove and transfer to a plate. The onions, mushroom, pepper and rosemary are sauteed in a little oil until the onion softens, then stir in flour and cook for a minute. Add the red wine, bring to a boil, then add the chicken stock and the pork. Simmer until pork is tender, about 1 hour 15 minutes. If the gravy appears to have reduced a lot, add some water or stock. The potatoes, (canned mushrooms and beans) are added in, continue to simmer until the potatoes are tender.

The stew smells so good while braising in the Dutch oven. 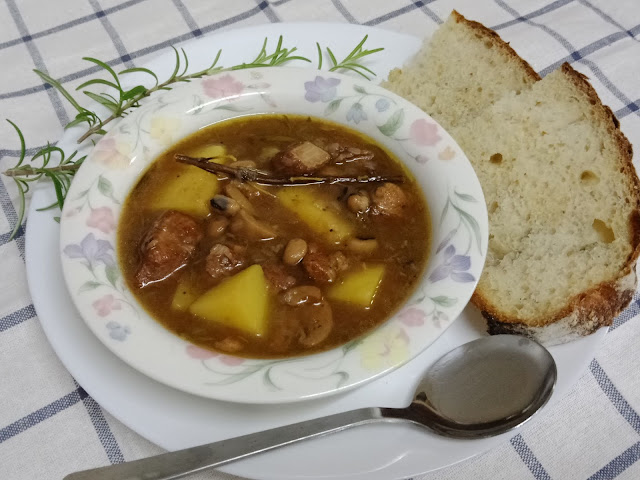 This stew is so delicious. Soft tender pork full of flavour, with tender potatoes and beans. The gravy is so flavourful and tasty. We had this stew for dinner with my homemade Roasted Garlic and Rosemary Sourdough Bread, so good to mop up every last drop of the gravy!

This is a lovely bread, with flavours from soft fragrant roasted garlic and the scent from fresh rosemary. 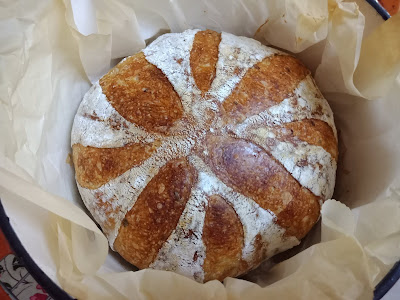 I've increased the chopped fresh rosemary to triple the amount, to 3 teaspoons, and reduce the salt to 1 teaspoon. 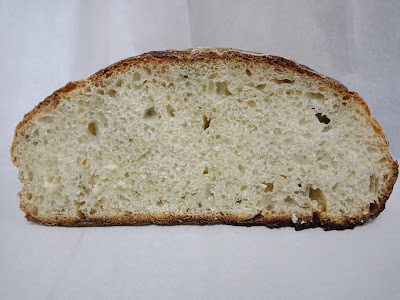 With soft close crumbs, we enjoyed this bread with a bowl of pork stew. Yummy!


This recipe is from Emilie Raffa's book, Artisan Sourdough Made Simple, and can also be found at this link.

This month's selection at Cook the Book Fridays where we are currently cooking from Everyday Dorie, is Potato Tourte. It is a double-crusted pie, with potatoes, herbs and cream for the filling. 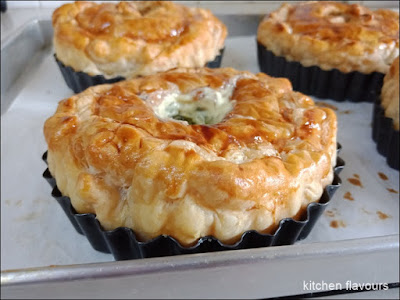 A couple of things which I've simplified, is to zest the lemon using the microplane zester. In the book, Dorie says to use a vegetable peeler to remove the zest, then slice into the thinnest strands. Seems like an extra work for me (I'm lazy!), so I use the microplane zester instead. For the potato, they are to be sliced very thinly, then drop into  a bowl of cold water, drain them and dry them well. I skipped the water and the drying part (told you I am lazy!). I sliced the potatoes using a sharp knife and use them directly. The herbs I've used are a combination of cilantro and scallions.

I made 4 mini pies instead of one 9-inch pie. I constructed the pies (Dorie says this pie is a construction project) the evening before, keep refrigerated, then the next morning, brush with egg wash and bake. 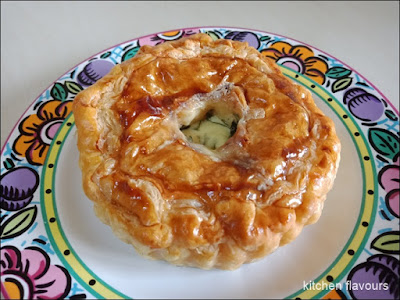 The pies are baked for 30 minutes, then pour some warm heavy cream into the vent hole at the top, then bake for a further 20 minutes until the potatoes are tender. Let the pie sit for about half an hour before serving. 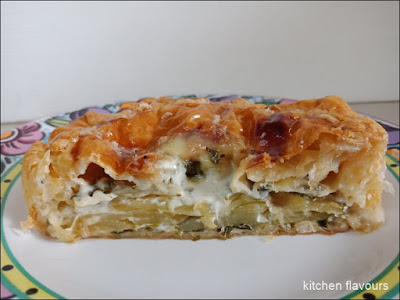 Yum! Yum!  So delicious! The potato are tender, so tasty with the herbs and cream. Another keeper recipe from Dorie!

Harvested some spring onions from my garden pot to make these Scallion Pancake (pajeon).  This is one of the snack that we would sometimes order when eating out at Korean restaurant.

I've added a medium onion, peeled, cut in half and sliced very thinly into half-moon slices. 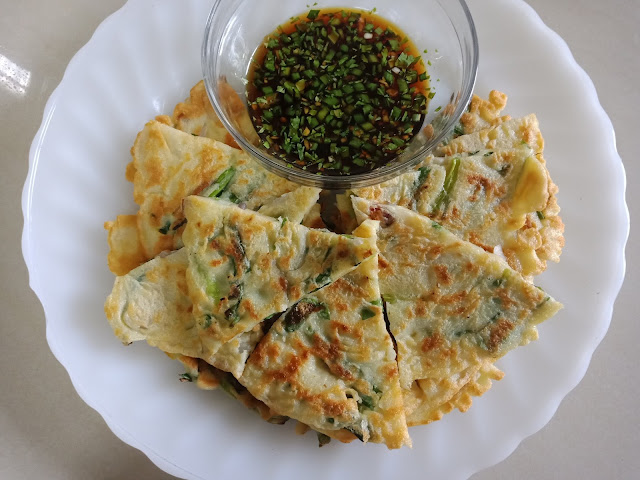 
I've used my favourite dipping sauce from another cookbook, the recipe can be found here.