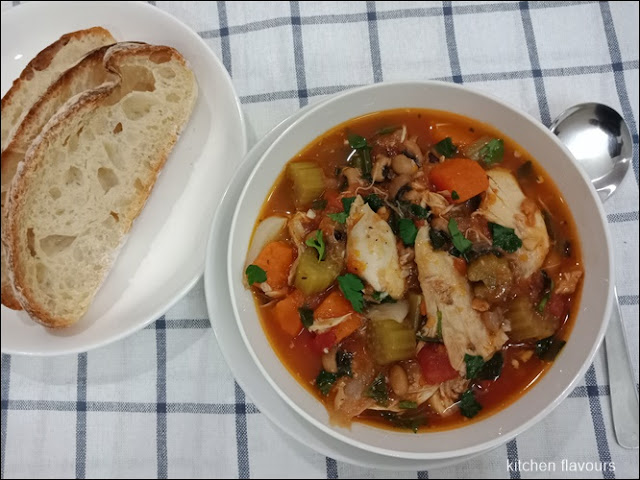 Ciabatta is an Italian white bread made with just few ingredients ; flour, salt, olive oil, water and yeast. It's shape is elongated, flat, rustic and broad, looks like a worn-out slipper, hence it is called Ciabatta which means slipper.


This recipe that I've tried is from Artisan Breads Every Day by Peter Reinhart. Ciabatta has a very wet dough, so it is preferable to mix the dough in a stand mixer. This high hydration dough (with more water than other regular bread dough), is required in order to achieve a light, airy and holey crumbs as the characteristics of a ciabatta bread.


Oiling your hands and the work counter with some oil will really help to handle the sticky dough. There's a series of stretch and fold, with 10 minutes rest, which is repeated a few times. The dough is then keep covered in a bowl and place in the refrigerator overnight, or up to 4 days. The next day, the dough is taken out and let rest for an hour, then shape as per the instructions given, and let rise for another hour before baking. 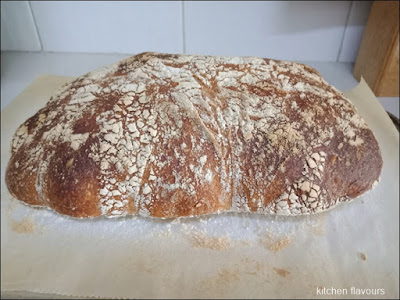 The dough has puffed a little before it went into the oven. And during the first 15 minutes or so, the bread has puffed even more in the oven. Happy to see that!
I did not have a baking stone, so I've used an overturned baking sheet instead. 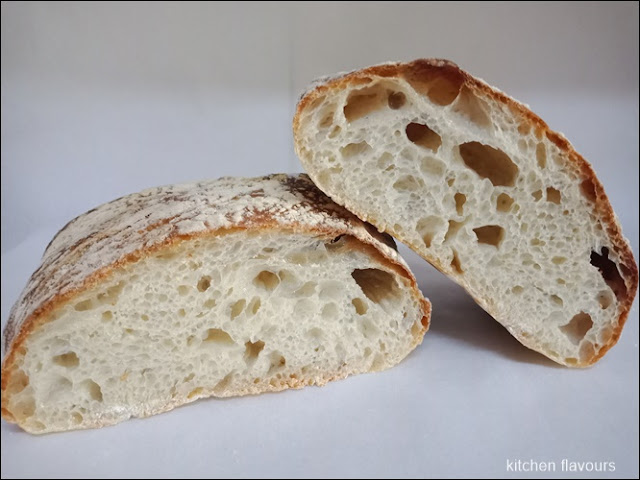 It bakes up lovely, with a rich brown crust and soft, spongy crumb, with those lovely holes that I was looking for! 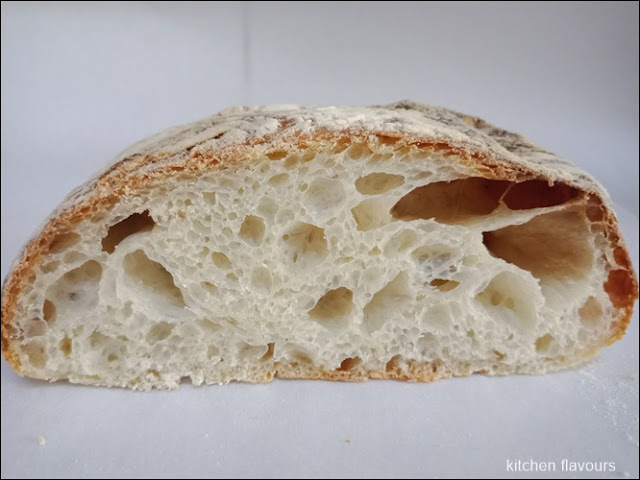 The crumb is still soft on the next day, though the crust has become softer and chewy in a delicious way. I enjoyed slices of it with just a spread of salted butter, so good! Great with stew too!

The recipe for this ciabatta can be found here.

Note ; I've made half a recipe for one large ciabatta. I've reduced the salt to 3/4 teaspoon which works out great for us.

A fruity sourdough loaf, with dried cranberries, apricots and raisins. I have omitted the sunflower seeds as I prefer my fruit loaf with well, just dried fruits only. The dried fruits are soaked in some warm water just enough to cover, with some added vanilla, sugar and cinnamon. Drain well and dry with paper towels before using them in the recipe. 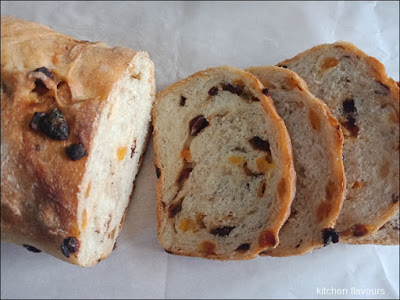 It smells so fragrant with the cinnamon, while the bread is baking in the oven. 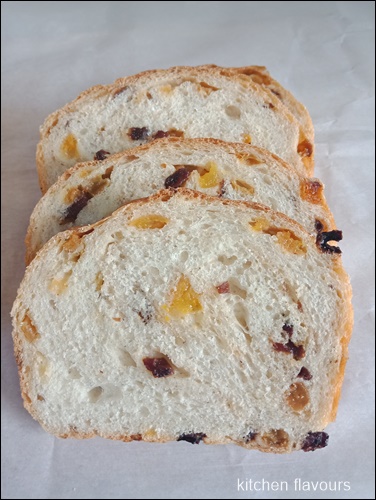 Soft, moist crumb, especially good when toasted, and spread with a generous amount of salted cold butter.  Love this bread! Another keeper recipe from Emilie Raffa.

Saturday Morning Fruit & Nut Toast recipe from Artisan Sourdough Made Simple by Emilie Raffa, on page 66. The recipe can be also be found here .

Over at Cook The Book Fridays, the selected recipe from Dorie Greenspan's cookbook. Everyday Dorie, is Mushroom-Bacon Galette. A savoury free-from tart, with mushrooms, leek, bacon, walnuts for the filling. 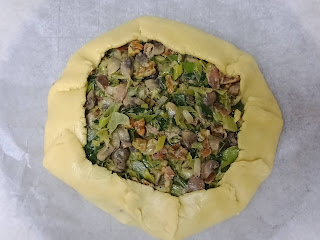 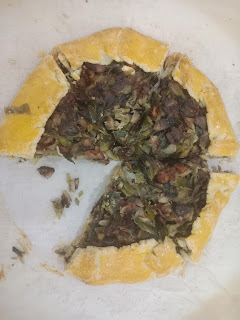 I did not sprinkle any parmesan over the baked galette, simply because i have forgotten ! But it was good too without the parmesan. The next time if I were to make this again, I will omit the walnuts, since we prefer the bites where there wasn't any walnuts. 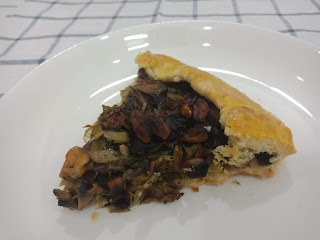 Please visit CtbF to see the other bakers view on this galette.

This post is shared at Cookbook Countdown #42
Posted by kitchen flavours at 10:42 PM 8 comments:

At I Heart Cooking clubs (IHCC) this week, "It's time to make a dish and Take It Outside to a picnic, outdoor gathering, park, porch or lanai!". I've made Nigella Lawson's Rosemary Loaf Cake, which is perfect for any gathering, either outdoor or indoors.

I have a pot of bushy rosemary plant in my garden, and am always looking for ways to use them. I can't believe that I have overlooked this recipe from one of my favourite baking books, How To Be A Domestic Goddess.

This is a plain butter cake, with bits of chopped rosemary leaves in it. The rosemary does not give it's herb flavour to the cake but rather a light aroma which is really very nice. As Nigella says " ...there is something muskily aromatic about it against the sweet vanilla egginess of the cake". 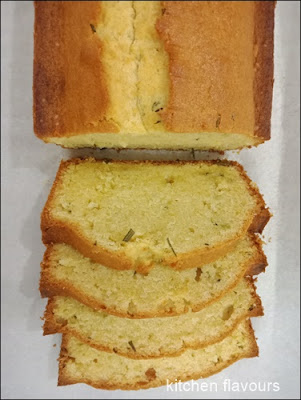 I've used salted butter instead of unsalted as in the recipe. The salted butter gives a really nice salty buttery flavour to the cake. 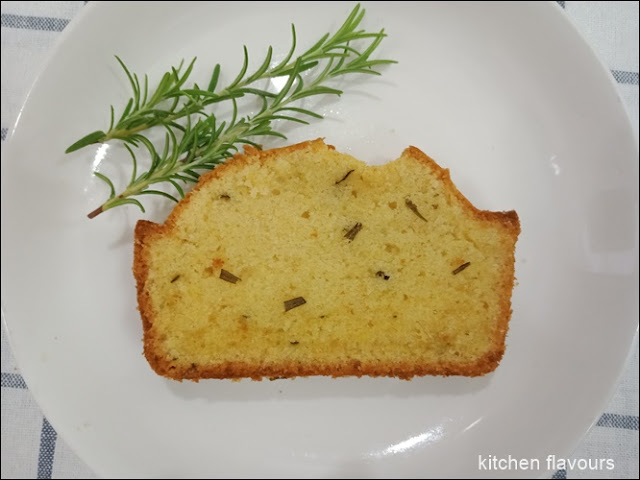 The cake is moist, with soft buttery crumb. My kinda cake, simple and yummy!


Preheat the oven to 350F.  Now cream the butter, adding the sugar when it's really soft, and creaming both together till pale and smooth and light. Beat in the eggs one at a time, folding in a spoonful of the flour after each addition, then add the vanilla. Fold in the rest of the flour (Nigella recommends using a rubber spatula), and finally the rosemary. Thin the batter with the milk, you're after a soft, dropping consistency - and pour, into the waiting pan. Sprinkle the top with a little sugar (I omitted the sugar), before putting it in the oven, and cook for 1 hour, or until a cake tester comes out clean. Leave to cool on a wire rack, in its pan, and when completely cold, unmould and wrap well in foil till you need to eat it. Like all sorts of cakes, it keeps well.
(serves 8-10)

I'm linking this post with :
I Heart Cooking Clubs, theme for this week Take It Outside!
Cookbook Countdown #42

Posted by kitchen flavours at 9:56 AM 3 comments: