Donna Hay is a famous Australian food stylist and the author of many, many cookbooks. Her cookbooks can be found easily over here, but I have never thought of buying any of her books. So when my baking buddy, Zoe from Bake For Happy Kids organized a blog-hop event "Cook Like A Star" featuring Donna Hay as the celebrity chef of the month, I took a second glance at Donna Hay's recipes online.  There are quite a few that I have bookmarked to try, and this salad is one of them. 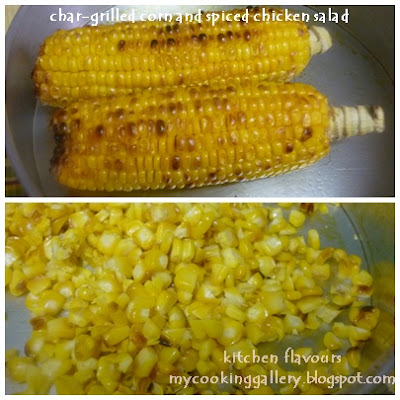 It so happens I have two cob of corns in my fridge and seems perfect for this salad. Instead of using the pan to char-grill the corns, I grilled them in my oven. The kernels are then sliced off from the cobs. 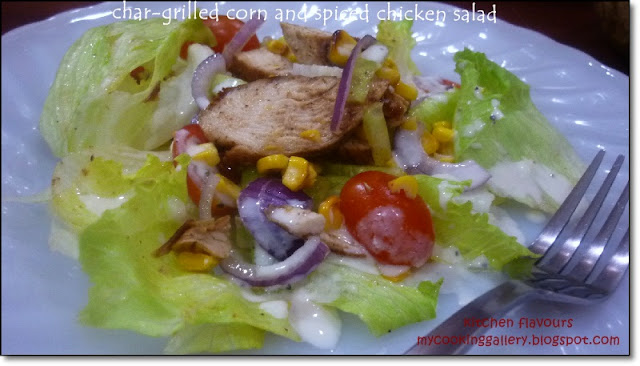 Went to the supermarket to get some asparagus, saw a few bundles of asparagus on the shelf, thought I get it later, while I went looking for some cherry tomatoes. Made a turn later to get the asparagus, it was all gone! I grabbed some Japanese cucumbers instead, definitely not going to grill these cucumbers! Could not find any Romaine Lettuce, so I use some regular lettuce instead.
I sliced the chicken breast fillet in half horizontally for thinner pieces, marinate with the paprika and cumin powder, though I did add a little bit of salt (the recipe does not call for salt), and pan-fry on both sides until cooked and light brown. It was very tasty, I ate a piece or two while cutting it to slices. :)
The yoghurt dressing is simple and very good and would be suitable for any salad, which I'll make again, especially since I'm using my own homemade yoghurt. 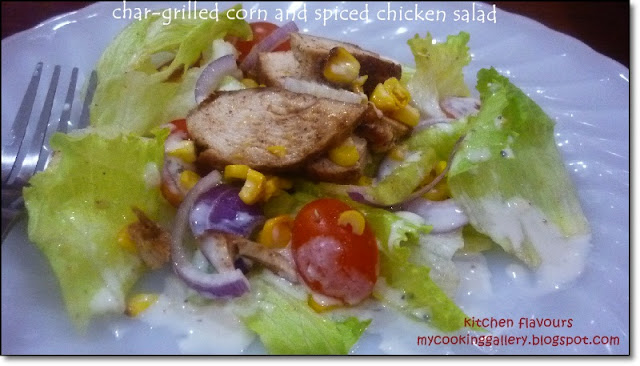 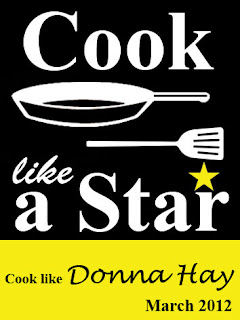 I'm linking this with "Cook Like A Star" blog-hop featuring Donna Hay as the celebrity for the month of March, hosted by my friend, Zoe of Bake For Happy Kids. Please drop by Bake For Happy Kids for the full details, you have a whole month to cook or bake any of Donna Hay's recipes and join in the blog-hop!
Char-Grilled Corn and Spiced Chicken Salad
(source from : Donna Hay, magazine issue 43 or here)
2 cobs corn, husks and silks removed
1 bunch asparagus, trimmed (I use cucumbers, cut to thick julienned strips and add to salad)
200gm chicken breast fillet, trimmed
olive oil, for brushing
1/2 teaspoon smoked paprika
1/2 teaspoon ground cumin
125gm cherry tomatoes, halved
1 (100gm) red onion, thinly sliced
1 baby cos (romaine) lettuce, leaves separated 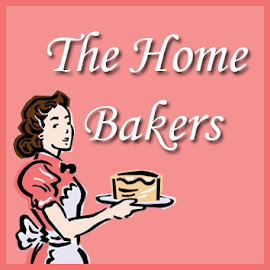 Starting from April 2012, I'm starting a new baking event, where we will be baking entirely from one book.
We are The Home Bakers (THB), a group of bakers who bakes from home and we all love baking and collecting cookbooks. Most of us would probably tried out about 2 or 3 recipes from most of the books that we own and these books somehow got pushed back or "forgotten" as we collect more cookbooks along the way! So, at THB, we will bake from one cookbook only, until every recipe has been baked. This will not only fully utilized your cookbook to the maximum, but it will widen your baking skills, and learn more about baking as we share our experiences together. For a start, we will be baking from this wonderful cookbook, Coffee Cakes by Lou Seibert Pappas. This is a beautiful book containing 60 simple recipes, which are perfect for a tea-time snack, picnic or simply as a breakfast treat.
For more information about joining in, please do visit the new blog, The Home Bakers. Everyone's welcome! Hope to see you!
Thank you!

Posted by kitchen flavours at 9:40 AM