Focaccia has been on my mind lately, even before I bought my new book, bake! by Nick Malgieri. And ever since I've seen this focaccia with potatoes and gruyere cheese from this book, it has been bugging me everyday! Yup, everyday! So instead of staring at the photo and kept reading the recipe from the book almost everyday, I went right ahead to make this  over the weekend. 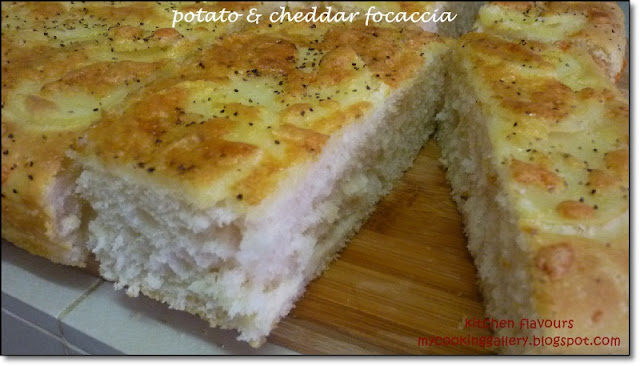 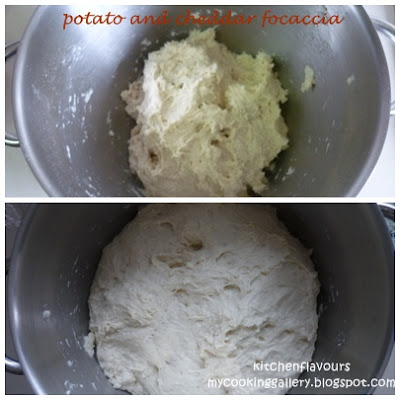 Just like most focaccia, no kneading is required. This is fairly easy. The yeast and water are mixed together, add in the olive oil, flour (I use bread flour) and salt. I used my stand mixer, with the paddle attachment, to beat the dough for 15 seconds. The recipe says to beat vigorously for 15 seconds by using a spatula, I don't think I can do that, as the dough is soft but really thick, and to beat vigorously gonna take much effort, even if it is only 15 seconds! Hehe! So, that's where my stand mixer comes in handy. Cover the bowl and leave to rise until doubled in size, about 1 hour. 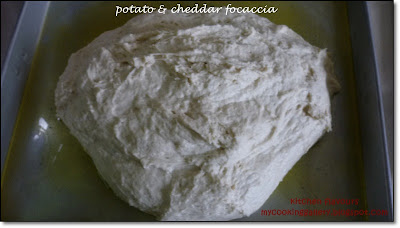 I use the pan size of 30cmx30cm, it is a little bit smaller that what is required, it's OK, the focaccia will be a little bit higher that's all. Coat the pan with olive oil, I only used 45ml (3 tablespoon) instead of the original 60ml (4 tablespoons) as the pan size is smaller and the oil seems quite a lot to me! Very carefully scrape the very soft dough into the pan, taking care not to overlap the dough. 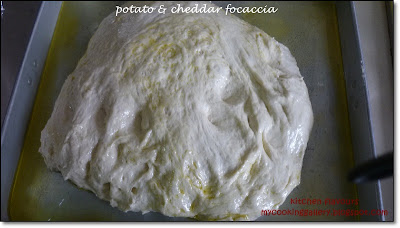 Gently reach under the dough with both hands and flip dough over, so that the surface that is coated with oil is now the top. Using the palms of your hands, slowly stretch dough to cover the pan completely. There was some resistance, so I left the dough to rest for 10 minutes, before I continue on with the stretching. Dough will be oily so it would not stick to your fingers. I did thought that it was a little oily and was kinda worried how it would turn out. But not to worry, once it is baked, it would not be greasy at all, and the oil actually makes the release of the focaccia from the pan a breeze! 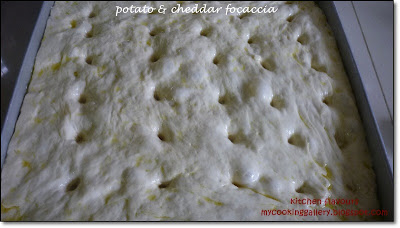 Once it has been stretched to cover the pan completely, cover with cling film and leave to rise for about 30 minutes until puffy. Using your index finger, make indentations or dimples on the surface. 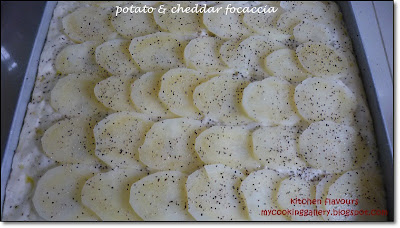 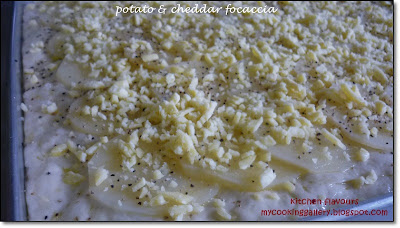 I use Cheddar Cheese as I do not have Gruyere Cheese. Sprinkle some grated Cheddar Cheese (or Gruyere) all over, drizzled with 1 tablespoons (original recipe uses 2 tablespoons) all over and bake in preheated oven for 30 minutes, mine was done at about 35 minutes, as my pan is smaller resulting in a higher focaccia. 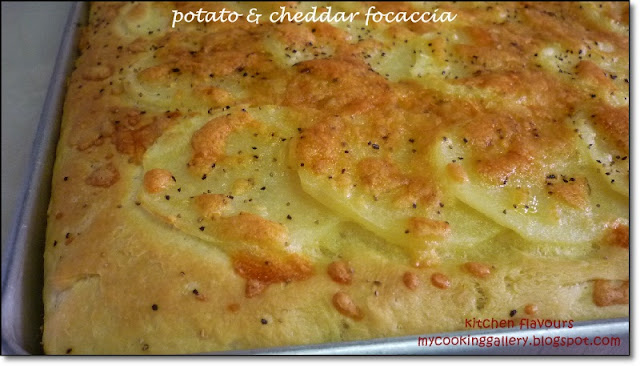 According to the recipe, check the bottom of focaccia at halfway baking time to see whether is the bottom browning too fast, if it is, slot a baking pan under the focaccia pan to insulate it. I checked mine, and the colour was still very light, so I just let it be. 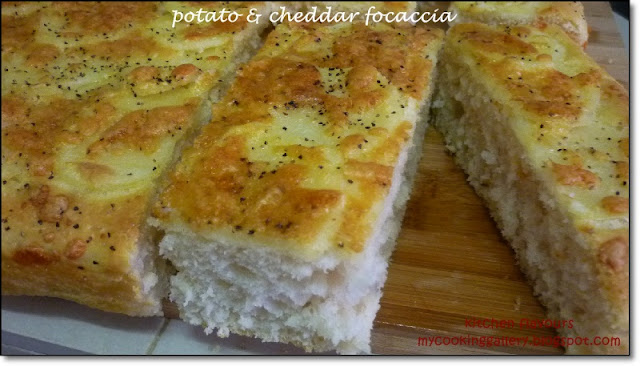 Once the focaccia has completed baking, loosen the sides of focaccia with a spatula, invert it onto a wire rack, remove the pan (really easy!) and re-invert it back again to another wire rack to cool. 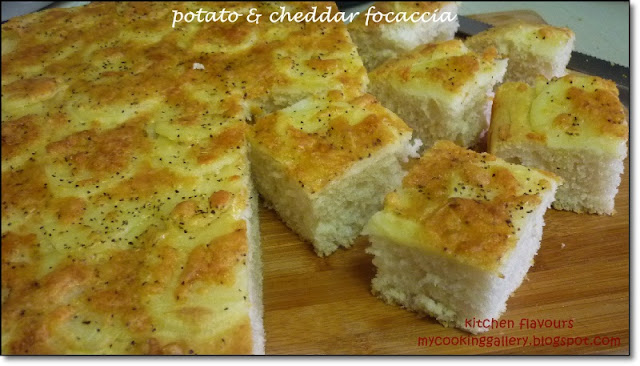 I was waiting impatiently to bite into one, I let it cool for about 20 minutes, then slice, and quickly devour one slice! These are so good! The best focaccia I've eaten! The topping of potatoes,  cheddar cheese and the black pepper are just so delicious, along with the fluffy bread, is fantastic! 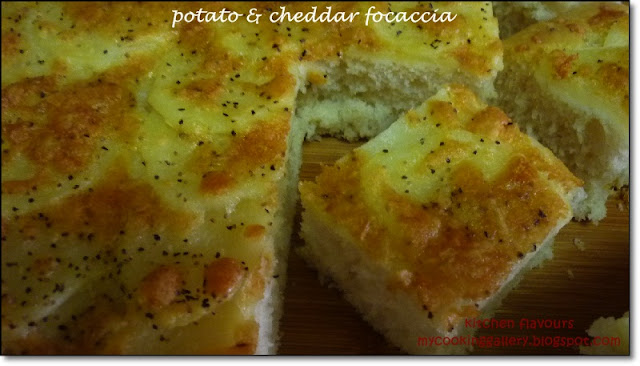 At first, I did thought of making half the recipe, but am really glad I did not! This makes quite a lot, so the next morning, I wrapped it in aluminium foil, pop it in the oven for 10 minutes and it tastes just as soft and delicious! I've found my new favourite focaccia!

Posted by kitchen flavours at 5:00 AM