For this month, Bake Your Own Bread (BYOB) has featured Hefe und mehr as the featured blog of the month, a lovely site with tons of bread recipes, I had a hard time selecting which one I'll make because there are so many that I want to bake!  There are a few that I've bookmarked, but I kept coming back to this particular rolls, Yoghurt and Sesame Rolls. Firstly I have made a bread with yoghurt used in the starter before, and I like it very much, and secondly, I love breads with sesame seeds on the top! I can imagine the fragrance of the sesame seeds. So, Yoghurt and Sesame Rolls it is!
I have made a few changes, simply to adapt to what I have on hand. There is always at least a jar of homemade yoghurt in my fridge, so perfect for these rolls. Stefanie from Hefe und mehr has used fresh yeast and freshly milled wheat, and since I do not have either of these, I use instant yeast and wholewheat flour instead.

I mixed this the night before.
1. Homemade yoghurt
2. Mix the instant yeast into the yoghurt in a large bowl. I left it for about 10 minutes.
3. Add in the wholewheat flour, bread flour and salt. Mix well.

1. Mix until dough is homogenous, it will be very sticky. Cover with cling wrap and leave at room temperature overnight.
2. The next morning, the dough has risen, but it is really sticky. It smells sour, but a lovely sour scent.
3. I tried to roll it out to 40cm square, as per the original instruction, even with a sprinkling of flour on top, it remains very sticky. The dough are supposed to be folded to a 20cm square and cut to nine squares before baking. Since I am unable to fold because of the stickiness, I divide the dough into 8 sections and made them into round rolls instead. 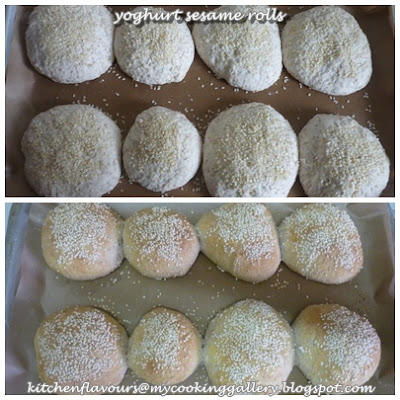 These rolls are not exactly round, when I placed them on the baking tray, they sort of go out of shape, as the dough is soft. I have to flour my hands really well, as the dough is sticky.
Scatter some sesame seeds over top, pressing them down gently. Leave to rise for about 40 minutes and bake in a preheated oven a 250C for 18 minutes, I baked mine at  230C for 21 minutes. 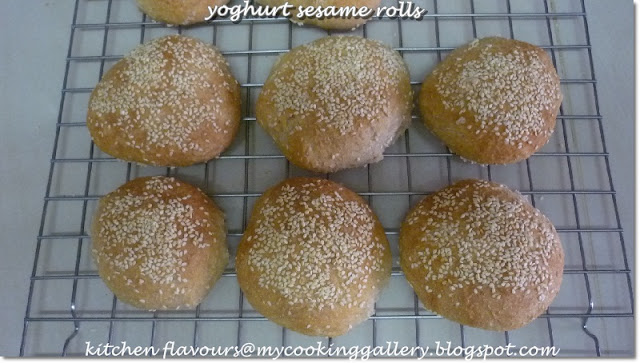 It smells really nice while baking. Immediately remove rolls from tray and place on a wire rack to cool. 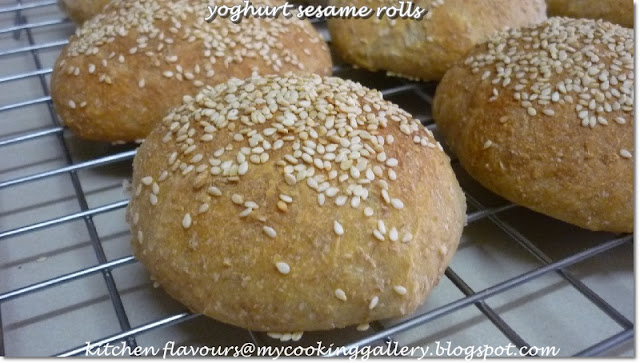 About 20 minutes after baking, I ate the first roll. 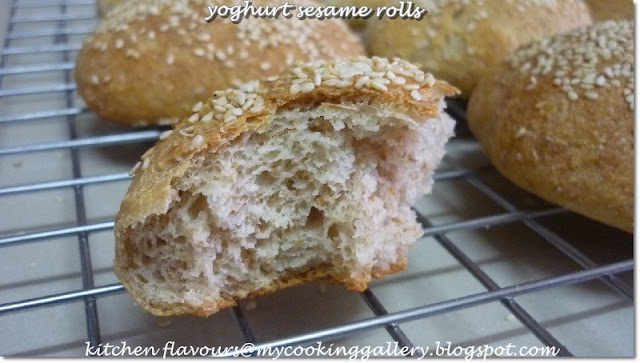 The crust is so crispy and the interior are soft and moist, with a sourish and tart taste of the yoghurt, just as Stefanie described. I love the crispy crust and the wonderful smell from the sesame. I had another one with a bowl of hot mushroom soup for a simple light lunch. Though I would prefer if these rolls are little bit less sour, nevertheless, I did enjoyed these rolls! I had one more later as a teatime snack with a generous spread of salted butter and a mug of hot sweet black coffee! Thanks to Stefanie of Here und mehr!

I'm sharing this with :
~ Bake Your Own Bread (BYOB) hosted by Girlichef, Delectable Musings and My Discovery of Bread
~ Recipe Box hosted by Bizzy Bakes


The recipe below is based on the changes that I've made. For the original version, please refer to Here und mehr.