Ever thought of making your own homemade sun-dried tomatoes, that is, if you have not made them before. If not, you should really try, especially if you love using those store-bought sun-dried tomatoes soaked in olive oil, sold in jars. It is not difficult to make, just that, you have got to be very patient as it takes anywhere from 6 to 10 hours for the tomatoes to be dried in a low temperature oven. You can dry them under the sun, but I think that it is more hygienic to use the oven, though it is definitely not the traditional way. Drying them under the sun would take about 2 weeks, depending on the weather and how moist the tomatoes are, and the tomatoes need to be covered with cheesecloth to prevent unwanted "visitors" like the flies and birds, and I am not that patient after all!

Buying sun-dried tomatoes in olive oil requires me to make a special trip to certain supermarkets, as not all supermarkets sells them. I would consider this as one of the gourmet ingredient since our Malaysian recipes do not use Sun-dried Tomatoes. This was one of the reason that got me interested to make my own.


The first time I made my own was back in June or July last year, and I did not soak them in oil, but left them dried and I still have a few pieces which is still very good, kept them in an airtight container in the fridge. They make very healthy snack! For longer storage, the dried tomatoes may be frozen and bring them back to room temperature before using.

Here's how I made the Sun-dried Tomatoes In Olive Oil : 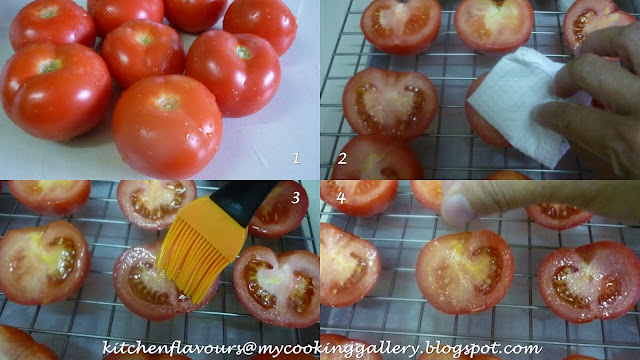 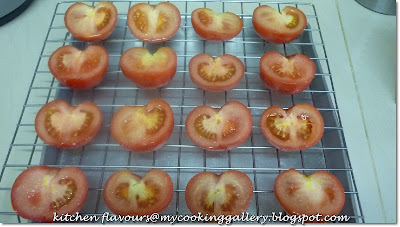 Place the tomatoes on a wire rack over a tray, with the cut side facing up. Do not allow the tomatoes to touch each other, make sure there are space all around each half for the hot air to circulate. Place the tray in an oven with a low temperature of 100F-110F, and leave them for 6-10 hours. It all depends on how dry you want your tomatoes to be. Check them after 6 hours and if they are still plump and moist, dry them a little longer. 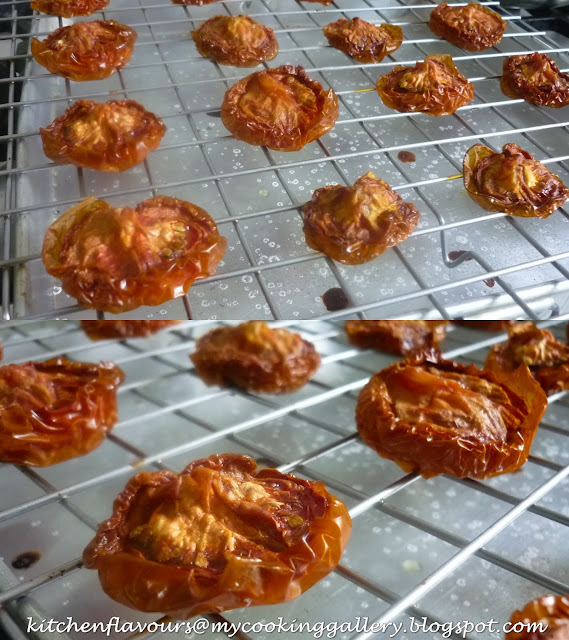 These are actually semi-dry, I dried them for about 8 hours at 100F, there are still some moisture in the tomatoes, which I really want. For drier tomatoes, dry them a couple of hours longer. 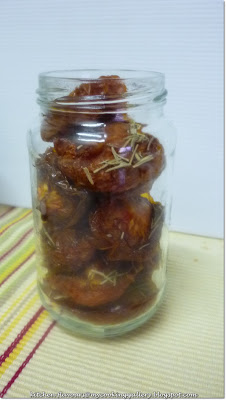 Once the tomatoes are cool, you may snack on them, use them for some recipes, or freeze them until needed. For this batch, I have soaked them in olive oil. Place the dried tomatoes in a clean jar, in two or three layers, sprinkle some dried herbs, here I have used dried rosemary, top with more dried tomatoes and sprinkling of more dried herbs. Fresh herbs like basil can be used. If you are using garlic, bear in mind that preserving tomatoes with garlic can lead to bacterial contamination, that was what I've read from some websites. 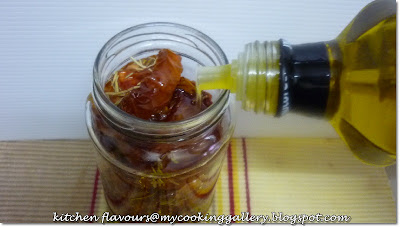 Pour olive oil into the jar, until the tomatoes are completely submerged. 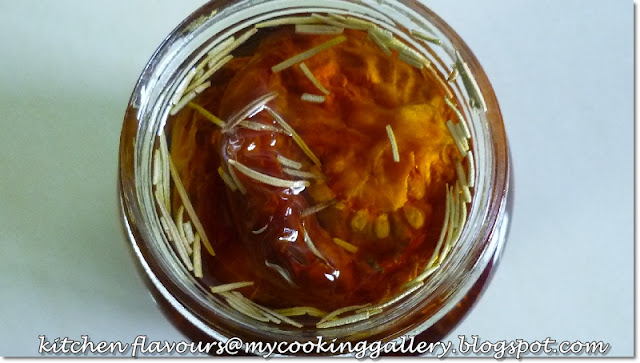 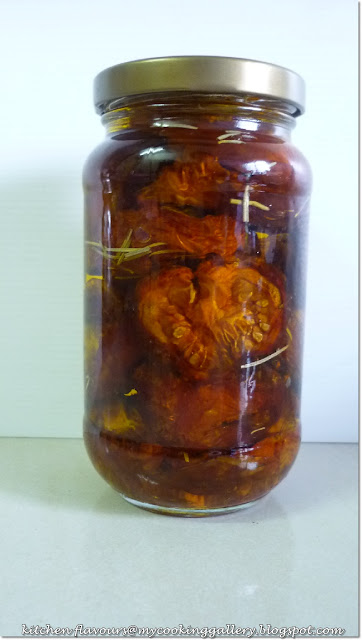 Seal the jar, and keep for a few days for the flavours to blend. Advisable to store in the refrigerator if you are not going to use it immediately, the oil will solidify if kept in the refrigerator. Simply bring it to room temperature before using, and the oil will get to normal once again. You many use the tomatoes in pasta, cooking, baking, salads and the oil can be used for drizzling over the pasta, salads and baking.

There are no fixed amount of recipe for this, simply follow the steps above as a guide. Making your own is not cheap either! Olive oil is rather expensive and with the long hours in the oven, your electricity bill will do a somersault! Haha! But nothing beats the satisfaction of homemade goodies! I was all smiles as I look at my  jar of Homemade Sun-Dried Tomatoes In Olive Oil!

Will be sharing some recipes using my Homemade Sun-Dried Tomatoes in Olive Oil in my coming posts next month! 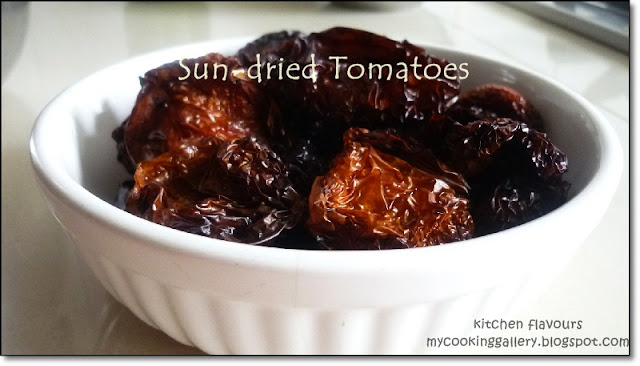 These are the really dried ones which I made back in June/July last year.

I'm linking this post with Little Thumbs Up, where the ingredient for this month is Tomato, organised by Zoe from Bake For Happy Kids and hosted by my little favourite DIY.

Posted by kitchen flavours at 10:41 PM