"Eating of the Green", our theme for this week at I Heart Cooking Clubs (IHCC), where we are cooking from Donna Hay's recipes. This week is all about greens and I've made this easy and fuss-free salad, which takes just minutes to prepare!

Recipe calls for arugula leaves, which I've replaced with butterhead letttuce, as I could not find any arugula leaves from the supermarket near my house. I've got to make a trip to another supermarket that sells arugula leaves, and I am really lazy as the weather is blazing hot, not to mention the terrrible haze which is everywhere! My children are keeping their fingers crossed, hoping that there will be an announcement that schools are to be closed for a couple of days until the haze condition improves!!


Instead of baking the bacon in the oven until crisp and golden, I have pan-fried the bacon in a dry saucepan over the stove, which is easy and takes only minutes. And did not use fresh parsley, did not have any. Since I have an opened jar of store-bought honey mustard in my fridge, I used that to which I've added a tablespoon of honey and a tablespoon of water to thin it a little. 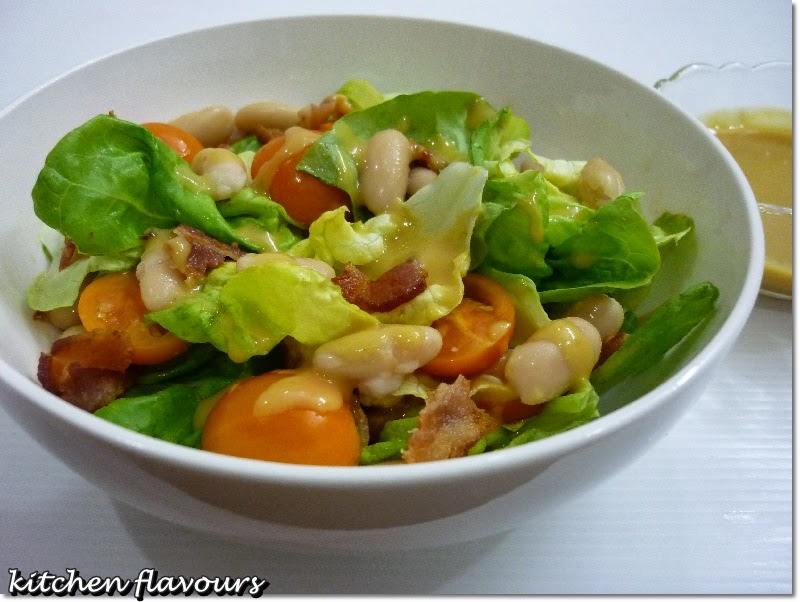 
To make the honey mustard dressing, place the mustard, honey and water in a bowl and stir to combine. Set aside.

Place bacon on a baking tray and cook under a pre-heated hot grill for 5-8 minutes or until golden and crispy. Drain on absorbent paper and break into pieces. Place bacon, tomatoes, beans, parsley, rocket and half the honey mustard dressing in a bowl and toss to combine. Divide between plates and serve with the remaining dressing on the side. Serves 2.

To view what my friends at I Heart Cooking Clubs are making, please do stop by IHCC.

Our time with Donna Hay is coming to an end soon, and we shall be cooking with another selected chef, Nigel Slater, starting from April. Anyone interested to join us, please visit this page at IHCC.

I'm sharing this post to :
Souper Sundays @ Kahakai Kitchen
See Ya In The Gumbo @Ms. enPlace
Posted by kitchen flavours at 12:15 AM