"East Meets West", this week's theme at I Heart Cooking Clubs (IHCC). This week we are to cook one of Diana Henry's dishes with a global influence. I was looking through her cookbook, "Food From Plenty", as was surprised to find this Chinese recipe of braised pork. According to her, "A pot of eastern deliciousness that is irresistibly more-rish. It also takes very little effort. Mushrooms make a good addition if you want to extend the dish with vegetables. You can obviously tailor this to suit your palate; not everyone is a big fan of star anise, for example, but stick to eastern flavours."

Where does '"East Meets West" fits in this dish? Eastern ingredients ; star anise, rice wine, rice vinegar, soy sauce. And for West....well, I'm picturing this pot is braising in Henry's western kitchen! Just realized when I was writing this post, that this is not a western dish with eastern influence, but a full eastern dish instead! 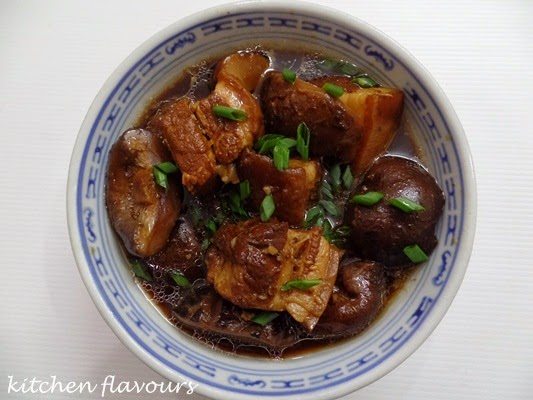 
I cook this dish with some little changes. I've added mushrooms as Henry suggested, and also because we love mushrooms in braised meat dishes such as this. Dry shiitake mushrooms are soaked till soften, discard the stems and cut the caps into half if the mushrooms are big, leave them whole if they are small.

I have only used about 1 tsp of sugar, as I prefer salty braised dishes to sweet. And have used only a teaspoon of vinegar too, as I do not like too much of vinegar in dishes like this. Taste as you cook, adjust to your preference. I have skipped the last part of thickening the braising sauce, as we like to have more gravy to eat with rice. 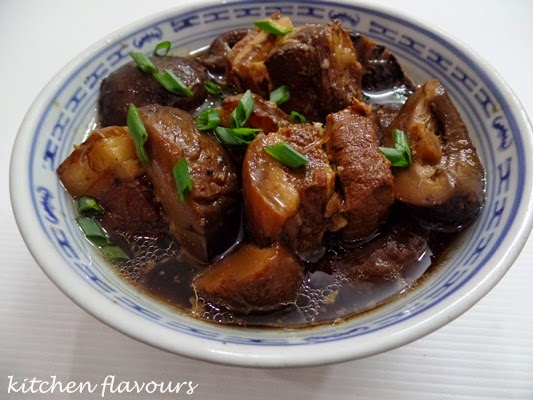 A tasty and nice dish. Fragrant from the star anise and the pork belly is really tender soft. Mushrooms always adds a wonderful flavour to braised dishes like this, and gets deliciously soft when braised for a couple of hours. Nice dish to eat with white rice, and a green stir-fried veggie on the side.

Posted by kitchen flavours at 10:29 PM