"Mystery Box Madness : March 2015", the theme for this week at I Heart Cooking Clubs (IHCC). There's ten ingredients given in the mystery box, where we must select at least three, and we are free to cook with either our present or past featured chefs at IHCC. 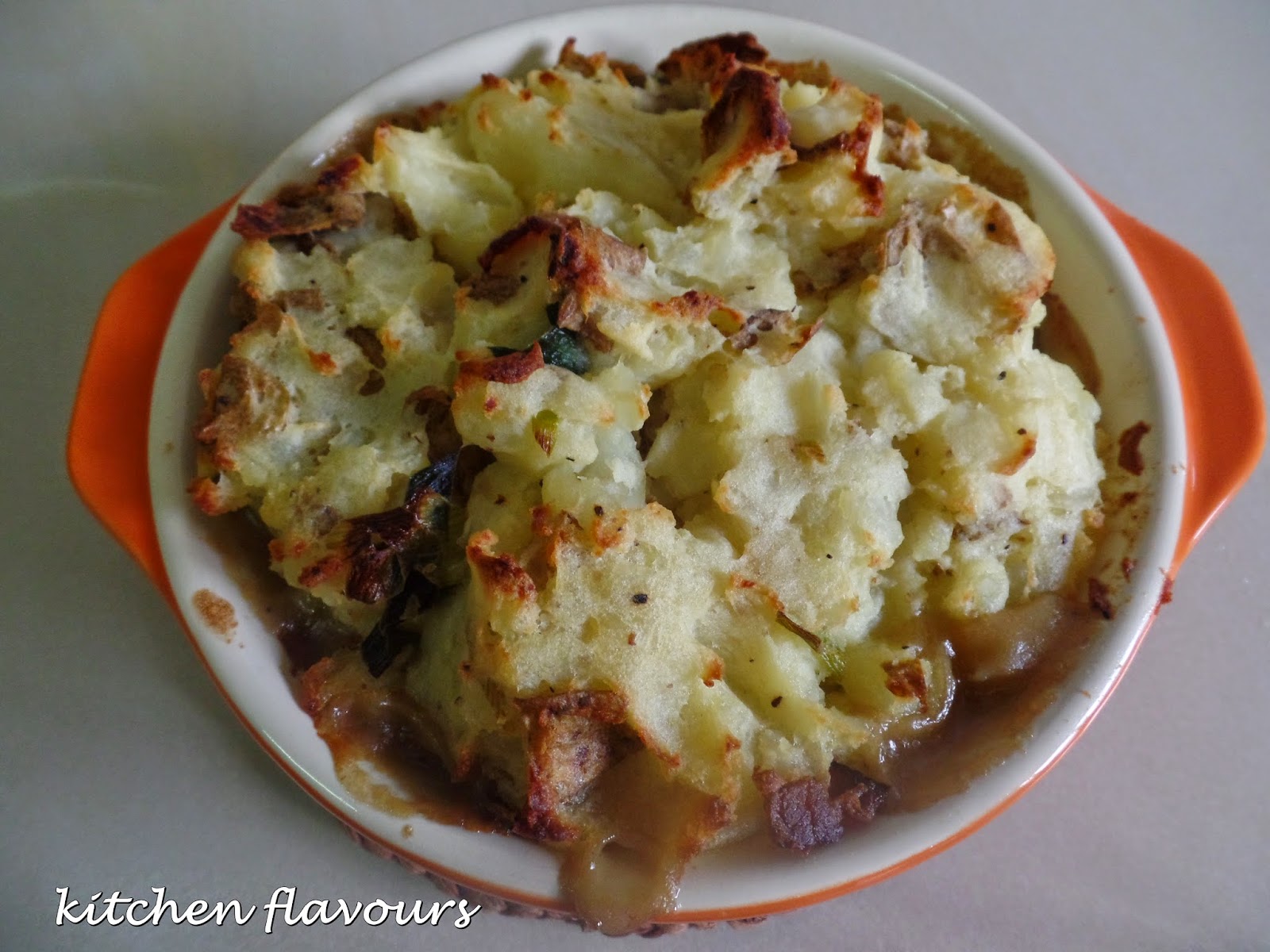 For this week, I've cooked with Nigel Slater, made his Leek and Mushroom Pie with Skin-On Mash, using three out of the listed ingredients ; 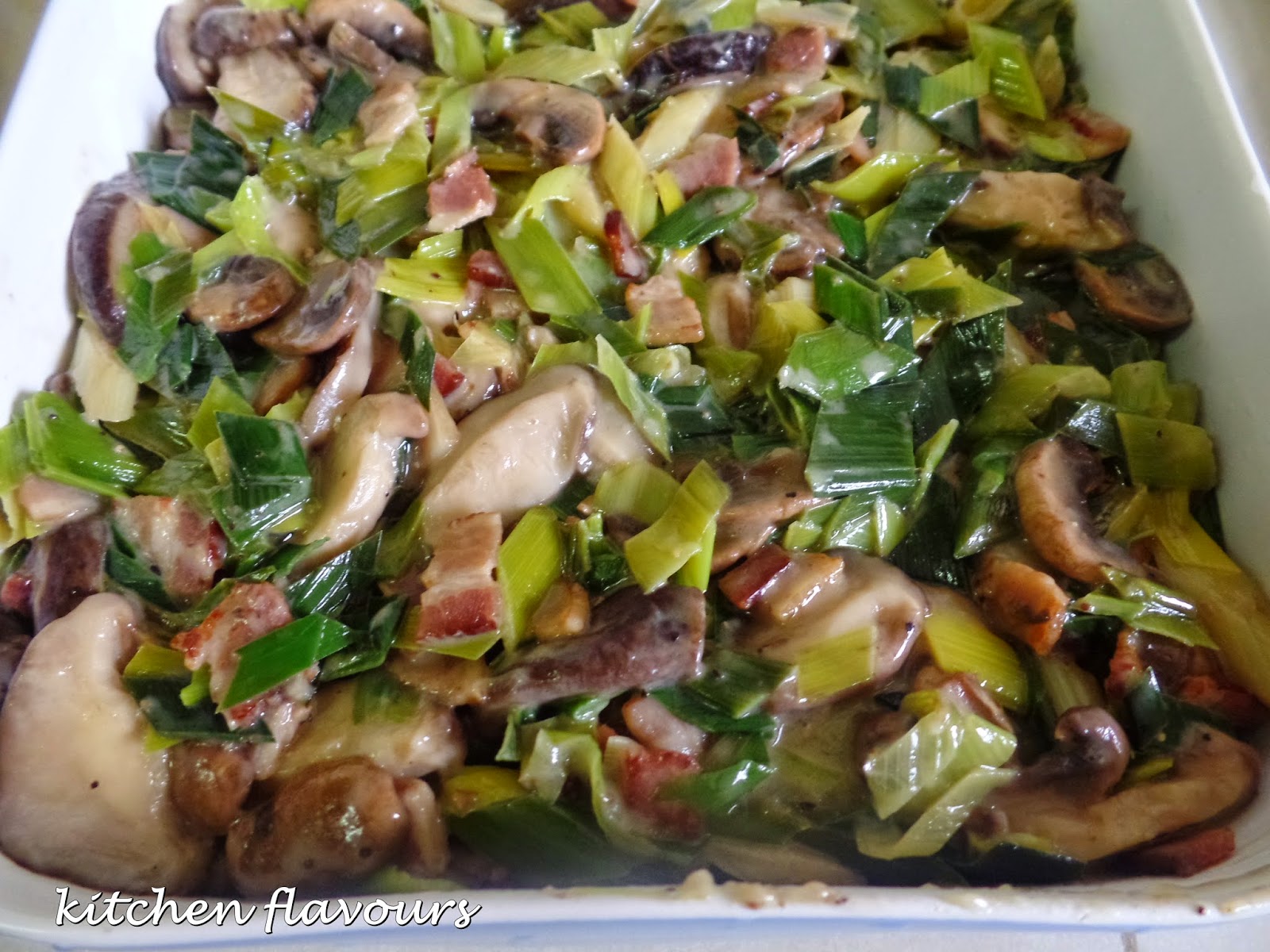 Originally Nigel Slater's recipe do not have any bacon, I've added that in, since Bacon is in the list, and also, I would have added in the Bacon anyway even if it wasn't in the list of ingredients! :) We love bacon around here! And I'm so glad I've added that in, the filling is so, so delicious, and bacon always makes a dish tastes so much yummier! I've used streaky bacon which I've cut to pieces.


NS says to use only the white and pale green part of the leek, discarding the green parts. But I have always used the green parts, it seems such a waste to discard. Once the leek has been cooked till softened, the green part would have softened as well, besides the filling looks better with some greens specks in it! I've used a mixture of brown button and Shiitake mushrooms. The leeks are first cooked with a little oil till softened, and kept aside. I fry the bacon pieces till lightly crisp and added in the sliced mushrooms. Return the leeks to the pan. Now, I did not read the recipe clearly and only realized that I need to simmer the leek and mushroom for 30 to 40 minutes. I was rushing for time, and only simmer for about 12 minutes after adding in the flour, white wine (did not have any Marsala) and some chicken stock. Since it was only a short simmer, I have used about 1/4 cup of chicken stock. Season with salt and black pepper to taste. I tasted the filling and it was so delicious! I'm really looking forward to this pie! Spoon the filling into a large baking dish, or into smaller baking dish for individual serving.

I started on boiling the potatoes, before I cook the leeks and mushrooms. I scrubbed the skins of the potatoes (I've used Russets), with a brush as the skin will be mashed together. By the time the filling is done, the potatoes are done too.The potatoes, including the skin are mashed with some butter. Season the mashed potatoes with some salt and black pepper to taste, making sure that they are well seasoned. Spoon the mashed potatoes onto the filling, and according to NS, "don't be tempted to smooth the mash on top". Yes, sir!  :)
Bake for 45 minutes. 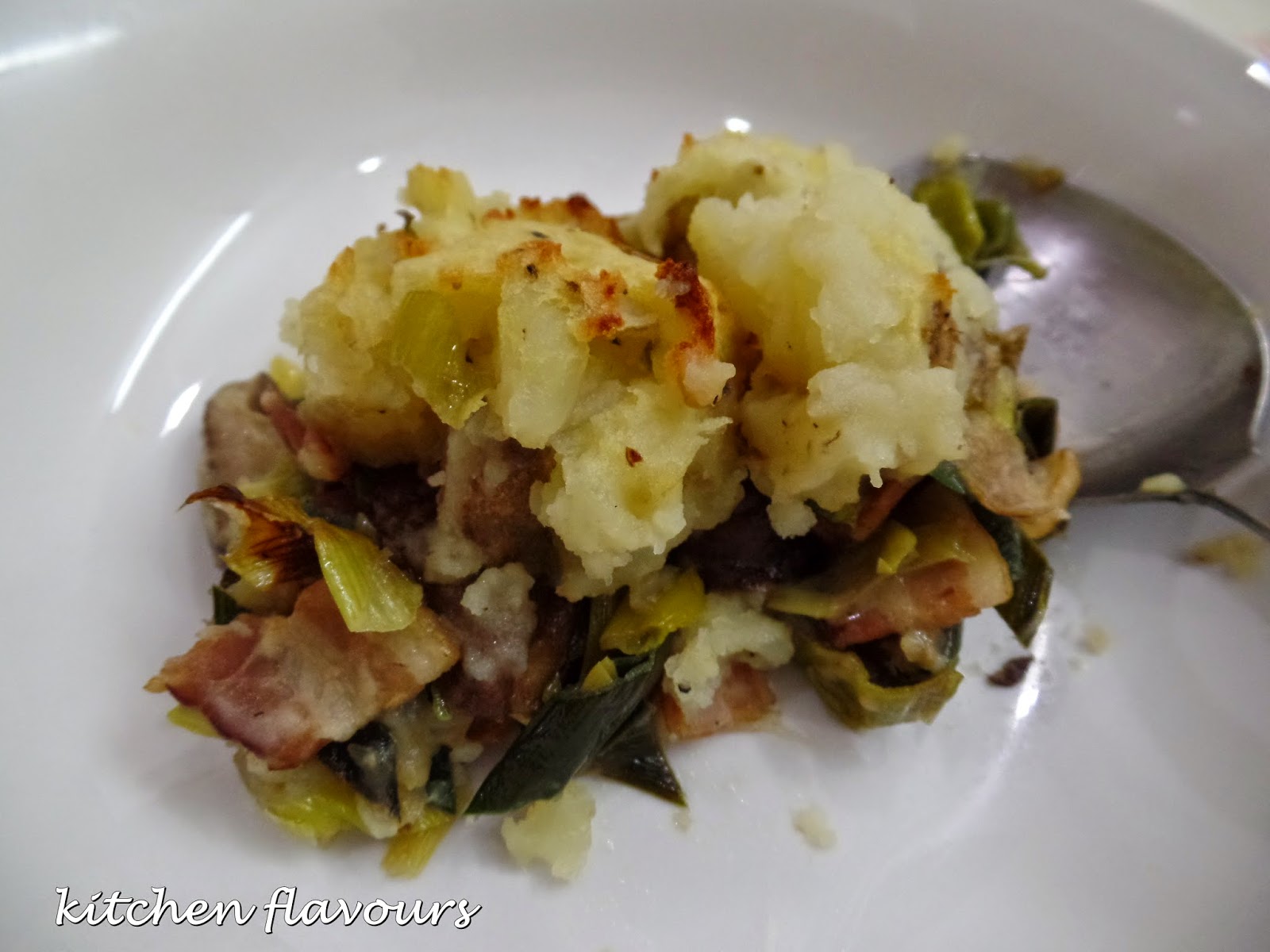 I've used three small baking dish for individual serving, and I like it that the filling seems to be bubbling in some corners, and smells so good! Serve the pie while still warm. This is one delicious pie and both my kids love it. The filling is so tasty. And what's not to love about mashed potatoes! Needless to say, there's a request to make this again!  :)


Trim the leeks, removing any dark green leaves (anything pale green or white is fine). Warm the olive oil and butter in a large casserole over a moderate heat. Thinly slice the leeks, then add them to the casserole. Cover with a lid and cook at a low to moderate pace for ten to fifteen minutes, until they are soft but not coloured.

Sort the mushrooms, dividing them into firm (chestnut, portabello, button) and the more fragile "wild" vatieties that will take less time to cook. Once the leeks are soft, remove them from the pan and set aside. Slice or quarter the firm mushrooms where necessary, add them to the pan and cook till they are lightly coloured, adding more butter or oil as you think fit. Return the leeks to the pan. Stir in the flour and continue cooking for two or three minutes, then pour in the Marsala, followed shortly by the stock. Leave to simmer for thirty to forty minutes.

Remove the tarragon leaves from their stalks, keeping them whole, and stir them into the sauce with the creme fraiche. Check the seasoning, remove from the heat, then pour the mixture into a large baking dish. Tuck in the raw fragile mushrooms (they will overcook if added during the initial cooking) and set aside.

Set the oven at 200C/Gas 6. Cook the potatoes, unpeeled, in boiling salted water till tender, then drain. Mash roughly, skins and all, with the butter. Place in rough mounds over the mushroom sauce (don't be tempted to smooth the mash on top) and bake for forty-five minutes. 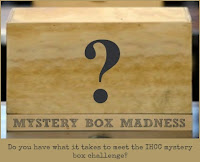 Posted by kitchen flavours at 1:57 PM