We are cooking with tomatoes at I Heart Cooking Clubs (IHCC) for this week's theme "I Say Tomato, You Say Tomahto!"  I've made one of Curtis Stone's pasta recipe which I have bookmarked to try for ages. Some members of IHCC, (Kim, Tina and Susan) has made this pasta for previous themes and everyone has given a thumbs up review. So it's my turn to join the wagon! 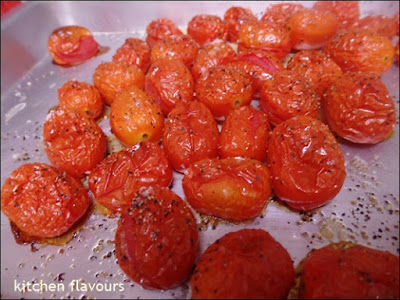 Sweet juicy cherry tomatoes roasted in the oven with some olive oil, salt and pepper until the tomatoes begin to spilt, which took about 15-20 minutes. I've used more tomatoes than the recipe calls for.


Originally the recipe is called "Rigatoni with Spicy Italian Salami, Baby Tomatoes, Olives and Capers".  I could not find Rigatoni and have replaced with Penne. Did not have Spicy Italian Salami too, but I do have some frozen pepperoni so that was what I've used.

Slices of pepperoni are fried in a little oil until lightly browned. Saute the chopped garlic, add in the roasted tomatoes, stir for a few minutes, then pour in the white wine, olives and capers. Stir and add in the pepperoni and parsley ( I have used cilantro). Stir in the cooked pasta, adjust the seasoning with more salt and pepper. Serve immediately. 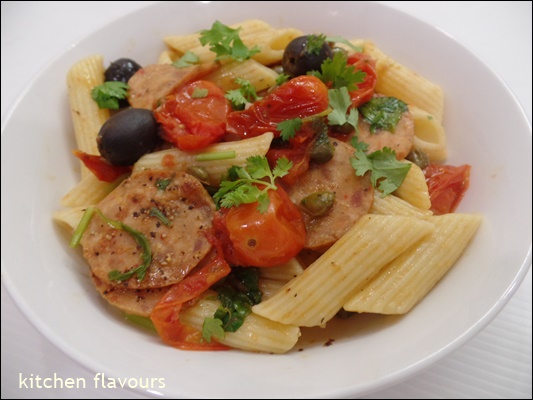 A very tasty pasta dish. The next time I will add even more roasted tomatoes. 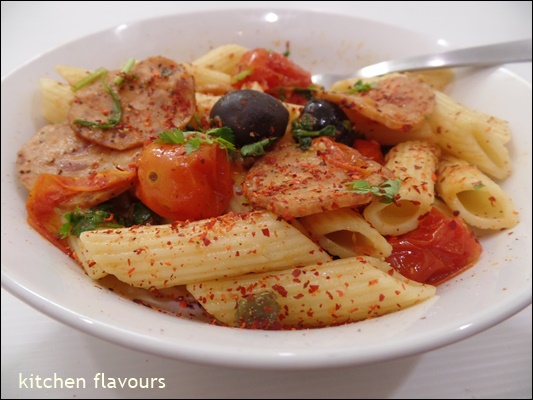 
Preheat the oven to 375F. Place the tomatoes on a small baking sheet and drizzle with the 2 teaspoons olive oil. Sprinkle with salt and pepper. Roast the tomatoes in the oven for about 8 minutes, or until they begin to split. Remove the tomatoes from the oven and let them cool slightly.
Bring a large pot of salted water to a boil.
While the water is heating, heat the remaining 1 tablespoon oil in a large heavy saute pan over medium heat. Add the salami and cook for 30 seconds on each side, until light golden in colour. Remove the salami from the pan and reserve.
Return the pan to the heat, add the garlic, and saute for 1 minute, or until tender. Add the tomatoes and saute for 3 minutes. Add the wine and simmer for about 3 minutes, or until reduced by about half. Add the olives and capers and toss gently. Bring the mixture to a simmer and add the salami and parsely.
Meanwhile, cook the pasta in the boiling salted water for 8 minutes, or until al dente. Drain the pasta and toss it in the pan with the sauce. Season the pasta to taste with salt and pepper. Transfer the pasta to plates, spooning any extra salami and tomato mixture from the pan around the pasta, and serve.

I'm linking this post with I Heart Cooking Clubs (IHCC), theme for this week,
"I Say Tomato, You Say Tomahto!" 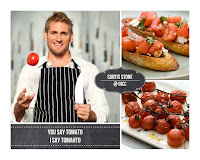 Posted by kitchen flavours at 12:10 AM