It's Potluck Week at I Heart Cooking Clubs (IHCC). For this week, I've cooked with Yotam Ottolenghi, a fish dish taken from his cookbook "Jerusalem".

According to Ottolenghi, Chraimeh is the "queen" of all dishes, just as famous as gefilte fish (another fish dish) for Tripolitan (Libyan) Jews. Families pride themselves on their particular chraimeh. This dish certainly looks delicious from the photo in the book. At a glance it looks like fish cooked in sambal sauce, but upon reading the ingredients list, it is entirely different.

He has advised to use any type of white fish meat, the best would be large sea bass. In the recipe, he has used salmon because they are the most widely available as steaks. I have used snapper steaks. He has suggested to double the sauce since it is so tasty, so that there is more to dip with bread, or serve with couscous or rice. I have made one and a half times more of the sauce. 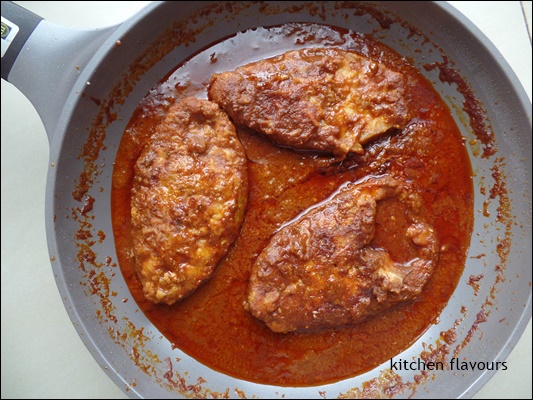 To prepare the sauce, first dry-toasted some caraways seeds, then ground. Caraway seeds has a lovely minty fragrant, but once they are dry-toasted, they smell incredibly nice. The ground caraway is then mixed in a food processor or blender with the rest of the sauce ingredients ; garlic, sweep paprika, ground cumin, cayenne, ground cinnamon, green chilli and oil, to a thick paste.

The fish steaks are coated with some seasoned flour, heat some oil in a skillet and sear on high heat on both sides until golden, about 2 minutes. Remove and put aside. Heat some oil in the skillet, fry the spice paste for just 30 seconds, then add some water and tomato puree. Bring to a simmer, add some sugar, lemon juice, salt and pepper. Put the fish in the sauce, bring to a gentle simmer, cover the pan and cook until the fish is just done, depending on the size of the fish, about 7-11 minutes. I turned the fish halfway during cooking. Remove from the heat, take the cover off the pan and leave to cool down. Serve just warm or at room temperature, with some chopped coriander and a wedge of lemon. 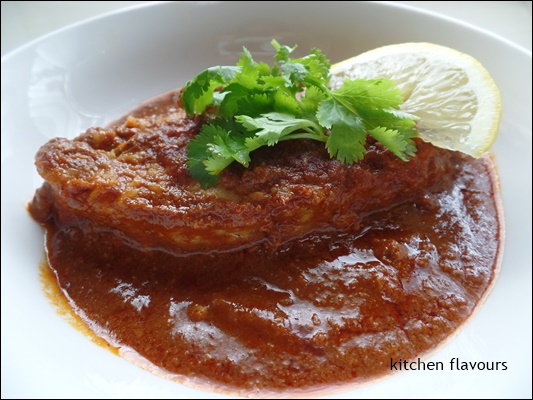 This is quite delicious! We had it at room temperature and it tastes even better when I tasted it right after cooking. I did not squeeze the lemon juice over because the sauce is good as it is. But be sure to add lots of chopped coriander, it makes the dish taste even better!


Heat 2 tablespoons of the sunflower oil in a large frying pan for which you have a lid. Place the flour in a shallow bowl, season generously with salt and pepper then toss the fish in it. Shake off the excess flour and sear on a high heat for a minute or two on each side, until golden. Remove the fish and wipe the pan clean.
Place the garlic, spices, chilli and 2 tablespoons of sunflower oil in a food processor and blitz to form a thick paste. You might need to add a little bit more of the oil to bring everything together.
Pour the remaining oil into the fyring pan, heat well and add the spice paste. Stir and fry it for just 30 seconds, so that the spices don't burn. Quickly but carefully (it may spot!), add the water and tomato puree to stop the spices cooking. Bring to a simmer and add the sugar, lemon juice, 3/4 of a teaspoon of salt and some pepper. Taste for seasoning.
Put the fish in the sauce, bring to a gentle simmer, cover the pan and cook for 7-11 minutes, depending on the size of the fish, until it is just done. Remove the pan from the heat, take off the lid and leave to cool down. Serve the fish just warm or at room temperature, garnished with coriander and a wedge of lemon. 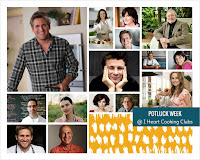 Posted by kitchen flavours at 9:18 PM