This recipe is from Joanne Chang's cookbook, flour, too, one that has been in my possession for quite sometime, but have never made anything from it before. Time to try some of the recipes and  I've selected this Oven-Baked Tortilla for our lunch. 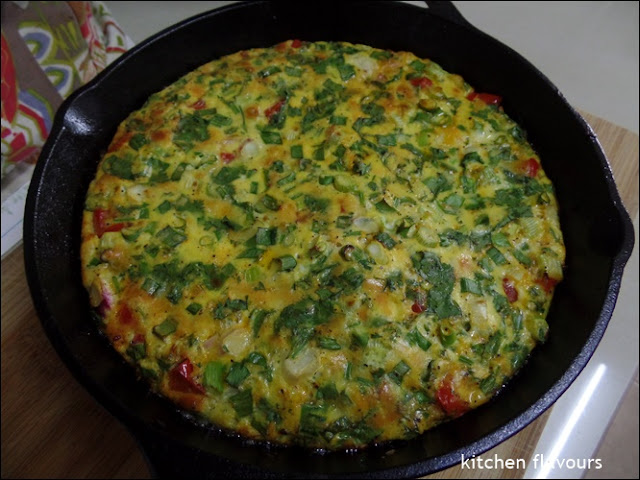 The potatoes are first boiled until cooked through, then peeled and cut into 1/2 in slices.
Yellow onions, red bell peppers are cut into pieces, then sauteed with some olive oil together with minced garlic until the vegetables soften, a few minutes. Season with salt and pepper. Transfer  the vegetables to a bowl. In the same skillet, heat some oil, then add the cooked potatoes, sprinkle with paprika, season with salt and pepper, and cook until the potatoes are brown in some places, do not turn the potatoes for three or four minutes. Turn the potatoes and brown the other side. Remove the skillet from the heat.

Whisk together the eggs, milk, Parmesan, scallions and parsley. Season with salt and pepper.

Spread the vegetables over the potatoes, pour the egg mixture and bake for 16 to 20 minutes until puffy and brown. Remove from oven and let cool for 5 to 10 minutes before serving. 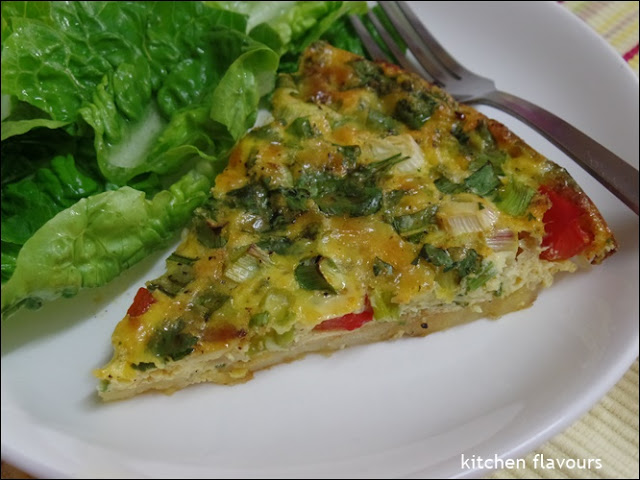 A slice or two served with some greens makes a delicious lunch.


In a medium saucepan, combine the potatoes with water to cover and bring to a boil over high heat. Reduce the heat to medium-low and simmer until the potatoes are cooked through and can be easily pierced with a fork; the timing will depend on the size of the potatoes. Drain and transfer the potatoes to a bowl. Set aside until cool enough to handle, then peel (the skins should come off quite easily) and cut crosswise into slices 1/2 in/12mm thick.
Preheat the oven to 450F/230C, and place a rack in the centre of the oven.
In a medium bowl, whisk together the eggs, milk, Parmesan, scallions, and parsley. Season with 1/4 tsp each of the salt and pepper. Set aside.
In the skillet, heat 1 tbsp of the olive oil over medium-high heat. Add the yellow onion, bell pepper, and garlic and sweat for several minutes, or until the vegetables soften. Season with 1/4 tsp salt and 1/8 tsp pepper. Transfer the vegetables to a bowl and set aside.
In the same skillet, heat 3 tbsp of the oil over high heat. Carefully add the potatoes and reduce the heat to medium. Sprinkle evenly with the paprika, the remaining 1/4 tsp salt, and the remaining 1/4 tsp pepper. Do not turn the potatoes for 3 to 4 minutes. Once the potatoes are nicely browned on the first side, flip them over and drizzle the remaining 1 tbsp oil into the skillet. Let the second side brown for a few more minutes. Don't worry, if not all of the potatoes get browned, the point is to get a nice crust on some of the potatoes. Remove the skillet from the heat.
Spread the vegetables mixture evenly over the potatoes, then carefully pour the egg mixture evenly over the potatoes and vegetables. Bake for 16 to 20 minutes, or until the egg puffs and browns and the middle is just barely set when tested with a knife tip. Remove from the oven and let cool in the skillet for 5 to 10 minutes. Serve warm or at room temperature. The tortilla can be made up to 2 days in advance and stored in an airtight container in the fridge. Bring to room temperature or warm in a 300F/150C oven for 15 minutes before serving.

Posted by kitchen flavours at 8:24 PM