This week's theme at I Heart Cooking Club (IHCC) is, Monthly Featured Ingredient Challenge : Apples and Pears ! There's definitely no shortage in recipes when it comes to these two ingredients, especially apples! Could not decide which one to make as there are tons of recipes using apples or pears.  I've decided to use them both in Nigella Lawson's Pear Pandowdy, recipe from her cookbook Nigella Kitchen. 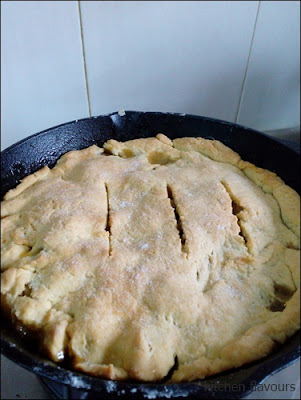 This is super easy to make, chunks of pears and apples are cooked in butter with some sugar and lemon zest for about ten minutes of so. I have used brown sugar instead of white. Then the pan is removed from the heat, keep aside while you make the pastry. Heat the oven to 200C.

The pastry is easy and quick to put together. There's butter and some vegetable shortening used, but I omitted the vegetable shortening and use all butter. Mix the flour and butter briefly, add some cold milk a little at a time until the dough binds. I did not use all of the milk, the dough needed only a quarter cup to bind together. Transfer the dough to a floured counter and roll out the dough until it is big enough to cover the top of the skillet over the cooked pears and apples. Make three slits on top, sprinkle some sugar and bake for 25 minutes. Nigella says it will turn to a pale golden crust. I prefer it to be darker, so I have baked an extra 5-7 minutes longer but the colour still remains pale. I then took it out of the oven, afraid that I'll end up over baking the crust. 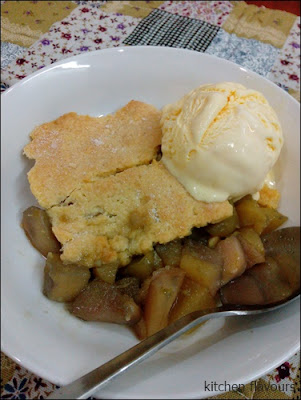 We had this with ice cream, and both the son and daughter like it very much. I thought this was Ok, but if I do make this again, I would make a couple of changes. For the filling, I thought that it needed something to bring out the flavours of  the pear and apples. I would add some spice, cinnamon or nutmeg maybe a touch of ginger too, and just a teaspoon or so of lemon juice, just to bring the flavours together. I might throw in some dried cranberries or raisins to be cooked together with the apples and pears, would add some delicious flavours that sometimes dried fruits are good at!  As for the crust, to get the lovely golden brown on the crust, I would brush the pastry with some egg wash before baking. But overall, this is quite lovely with a generous scoop of ice cream!


Preheat the oven to 400F.
Peel the pears and apples, then quarter them, slice out the cores, and cut the pears into 3/4 inch pieces and the apples into 1/2 inch pieces, dropping them into a bowl as you go.
Using a skillet or frying pan that can go into the oven later, melt the 3 tablespoons soft butter over a medium heat, then add the diced fruit, sugar, and lemon zest, and cook over a lowish heat, stirring occasionally,  for 10 minutes, by which time some of the fruit will have begun to caramelize gently. Take off the heat while you get on with the pastry.
Put the flour and salt into the bowl of a freestanding mixer fitted with the flat paddle, add the very cold cubed butter and, using a teaspoon, drop in little lumps of cold shortening, then slowly mix to cut the fat into the flour, or just do this by hand.
Still with the motor running, and the paddle turning slowly, add the milk a little at a time, just so that the dough binds, then remove from the bowl, squish it together with your hands, and drop it onto a lightly floured surface ready to roll out.
Bring the pan of cooked fruit nearby (but not so near as to warm the dough), and roll out the dough until you have a rough circle about the diameter of the skillet. Drop the dough circle on top of the fruit, tucking in the edges a bit, and remember that the ramshackle look of this is the whole point. Make 3 slashes with the tip of a sharp knife, sprinkle with 1/2 teaspoon of sugar, and put in the oven for 25 minutes, by which time the white dough will have turned into a pale golden brown.
Remember that the handle will be searingly hot, so transfer carefully to the table, and preferably cover the handle. Serve with heavy cream.

Other apples and pears recipes which I've made before from IHCC past featured chefs : 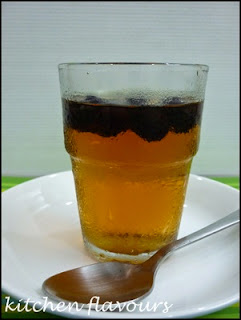 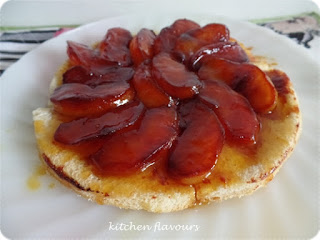 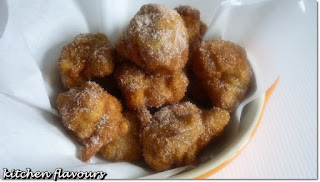 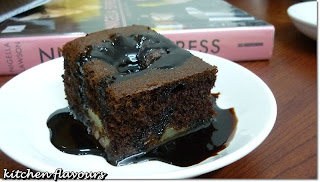 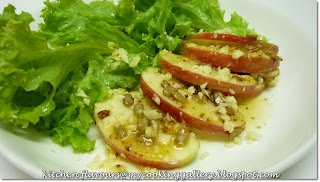 Apple and Cheddar Salad (Yotam Ottolenghi)
It's an Ottolenghi recipe, so it must be good! 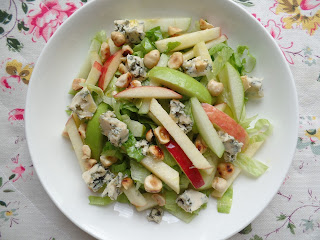 Posted by kitchen flavours at 12:32 AM