It's IHCC's first Potluck Week for 2018. I've made Rum and Raisin Cake from the cookbook Sweet by  Yotam Ottolenghi and Helen Goh. Ever since I bought the book, this is the recipe I've been wanting to make, I love cakes with rum, and this cake did not disappoint.

The only change I've made is to reduce the brown sugar slightly and omitted the glaze, as I prefer eating cakes without any glaze or frosting. As long as the cake is moist, buttery and delicious, the glaze or any frosting would not be missed, at least for me. 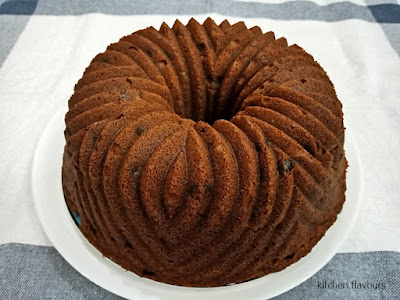 The raisins needed to be soaked in rum the day before.
The batter is really thick, thicker than most bundt cakes I've made, and that got me worried that the cake would be heavily densed. I was tempted to add a few tablespoons of milk, but decided to follow the recipe instead. The filled bundt pan with the batter was a weight!
During baking, the cake almost did not rise at all, the level of the batter when filled into the pan was almost exactly that as when the cake was done baking. It smells incredibly rum-delicious when the cake was baking.

When the cake has cooled for 15 minutes, I turned the cake out of the bundt pan, and that was when I knew that the cake would be OK, as it was quite soft and tender to the touch. 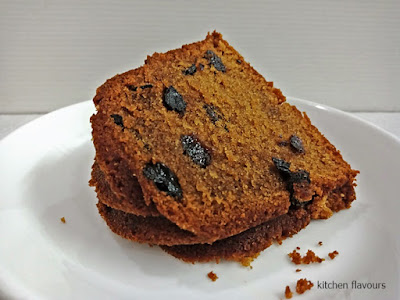 This cake smells incredibly fragrant from the rum, with moist, surprisingly soft tender crumbs, maybe due to the sour cream used for the batter, and not only it is rum-fragrant, you can taste the rum too, a definite plus in my books, delicious!  I really like this cake, and would love to make a yellow version of it by replacing the raisins with sultanas and using white sugar instead of brown.

Recipe can be found from guardian.com here, or from Sweet , page 124.


I'm linking this post with I Heart Cooking Clubs (IHCC), theme for this week
January 2018 Potluck

Posted by kitchen flavours at 10:17 AM