This is another keeper recipe from Classic German Baking by Luisa Weiss. It is called Süddeutsche Lauchtorte in German (I cannot even pronounce those words!). This tart is very similar to a quiche. 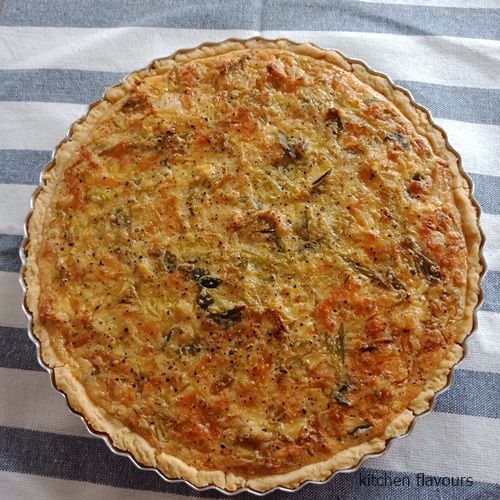 The dough for the crust can be made a day earlier, wrap with cling wrap and keep refrigerated,  the next day, roll the dough to line the tart pan, then bake blind for 15 minutes.

For the filling, I have replaced bacon with chicken meat. I've used a small piece of chicken breast meat, pan fry lightly in a little oil in the saucepan, seasoned with salt and black pepper, cook until the chicken is done. Let cool and chop to small dices, about 1 cup. And have used homemade chicken stock instead of white wine. The leeks are sauteed with butter until softened, season with salt, black pepper and nutmeg. Mix in a large bowl, eggs, sour cream and cornstarch and stir in the leek, chicken and cheese. I have used Cheddar cheese instead of Emmentaler cheese. Pour this mixture over the prebaked crust, smooth the top and bake until golden brown, about 40 minutes. 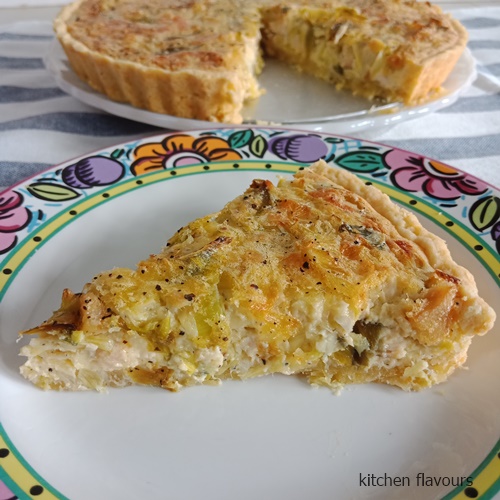 Delicious and very tasty filling, with buttery tender crisp crust. I made this tart in the morning, and enjoyed two slices for my lunch, warm from the pan, with a cup of tea. Yum!

The recipe can also be found here.

Posted by kitchen flavours at 9:25 PM