It is potluck week at I Heart Cooking Clubs (IHCC). We have 19 chefs featured at IHCC, and Ina Garten, one of the chefs featured, whose recipe Ginger Shortbread, I've made for this week's potluck.

I love shortbread, and shortbread usually contain lots of butter, so I did not make them as often as I want. It has been too long since I've eaten or made any shortbread, it's time to indulge in some buttery shortbread! 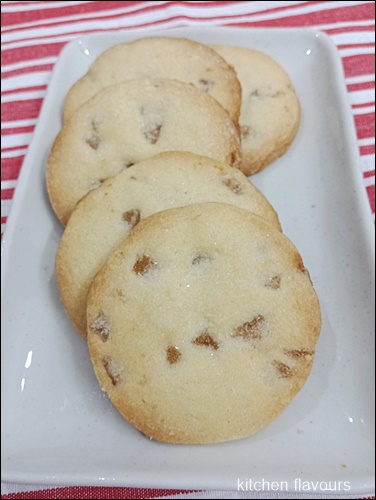 There's 3 whole sticks (about 375gm) of butter used! Butter in Malaysia are mostly packed in 250gm bars. I've used one bar and the balance from an opened bar, which comes to 350gm weight in total, and I consider that as 375gm. I did reduce the sugar, using only 2/3 cup instead of the full cup. There's 3/4 cup of minced crystallized ginger used, next time I'll use a full cup.

Ina's Ginger Shortbread is just wonderful, so happy I've made them! They are buttery, crisp tender and yummy. Ina says these shortbread are great as dessert with vanilla ice cream. But I like them with a cup of warm Earl Grey tea, without cream. Yums!

This Ginger Shortbread recipe is from Ina Garten's cookbook, Make It Ahead, page 230. The same recipe can also be found at foodnetwork website, here.


This post is shared with :
I Heart Cooking Clubs
Cookbook Countdown #48