Do you like bacon and onions? Cheese and bread? Well, if you do, then this bread is definitely for you! There's a new bread cookbook released in November 2014, which I have been eyeing even before it was released! I was pretty excited when I found this book "Bread", by Dean Brettschneider, at our local bookstore a few months later, and after looking through it, I knew that somehow it would end up at my bookshelf! A few weeks later, I ordered it via online from one of our local bookstore with a discounted price as they were having an online sale at that time. I'm glad I'm waited!

Could not decide which bread to make at first, but somehow bacons, cheese and onions won! What's not to love when these three come together! 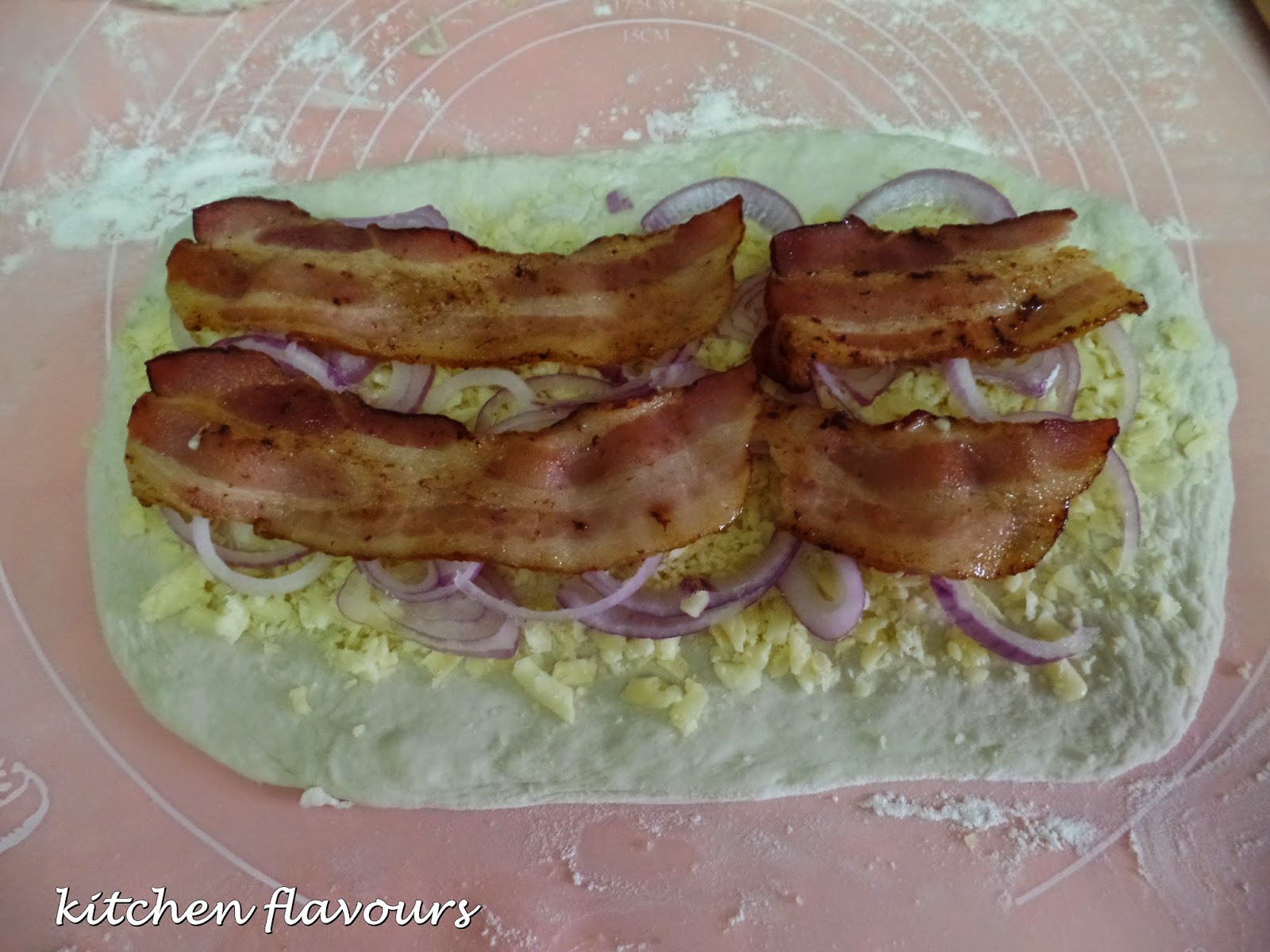 The dough is pretty much straightforward, with the usual bread dough ingredients. I have however used the stand mixer to mix the dough. The dough is proofed twice, and after the second rise, the dough is rolled out flat and the filling is scatter all over. I have however divided the dough into two (instead of as one very large piece) and filled each with the filling. I've used streaky bacon which I pan-fried lightly in a dry saucepan just until they begin to colour and crisp slightly, let cool before use. Firstly, sprinkle some grated cheddar cheese all over the rolled out dough, then followed by the sliced onions and top with the pieces of bacon. Fold the dough over the filling as per the instructions given in the recipe. 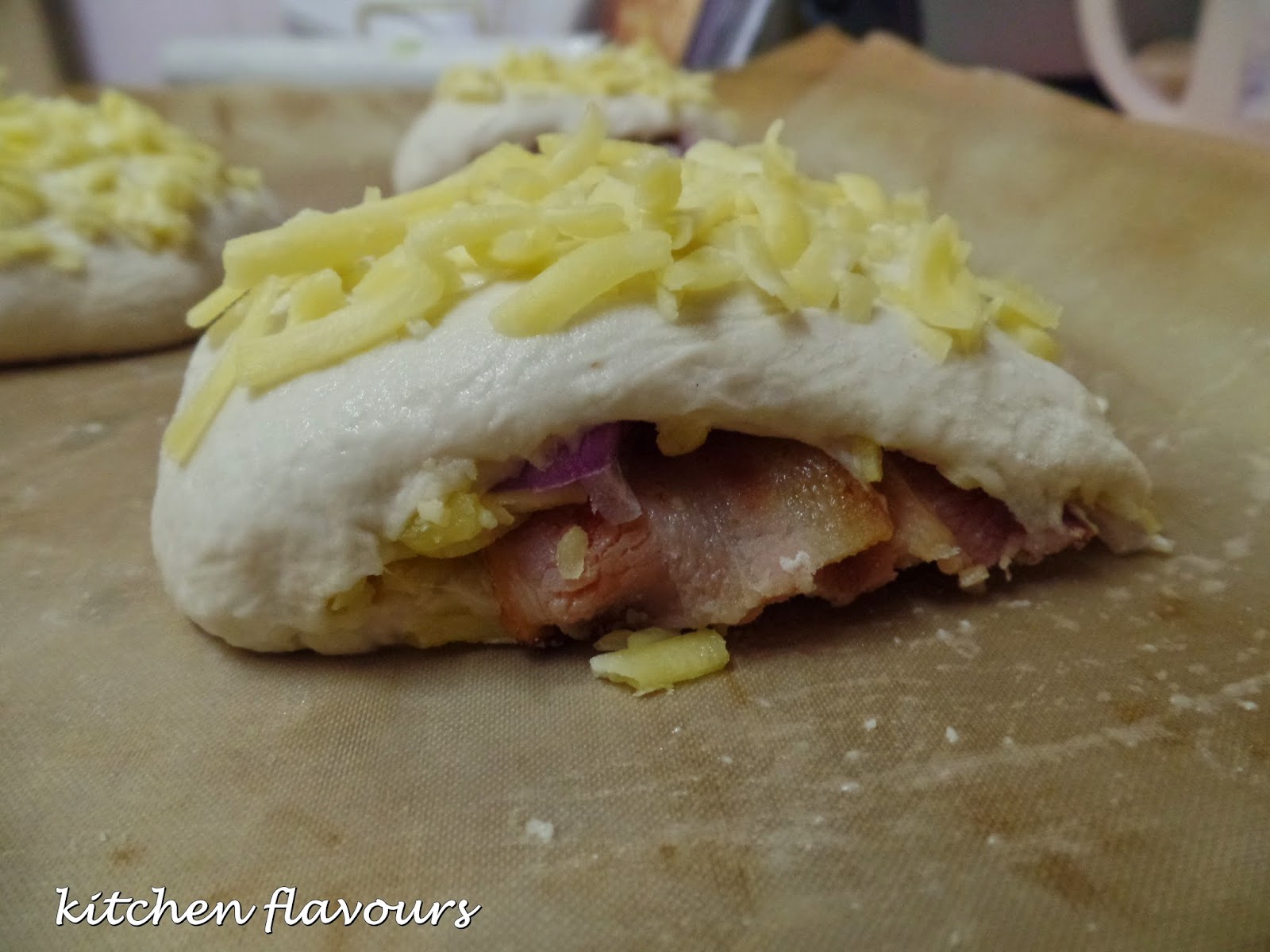 Slice the filled dough into 6 to 8 pieces, place them on a lined and greased baking tray, spacing them apart, brush the top with water and sprinkle more grated Cheddar on top. Cover loosely with greased plastic wrap and leave in a warm place for approximately 30 minutes, until they puffed up. Bake as directed. 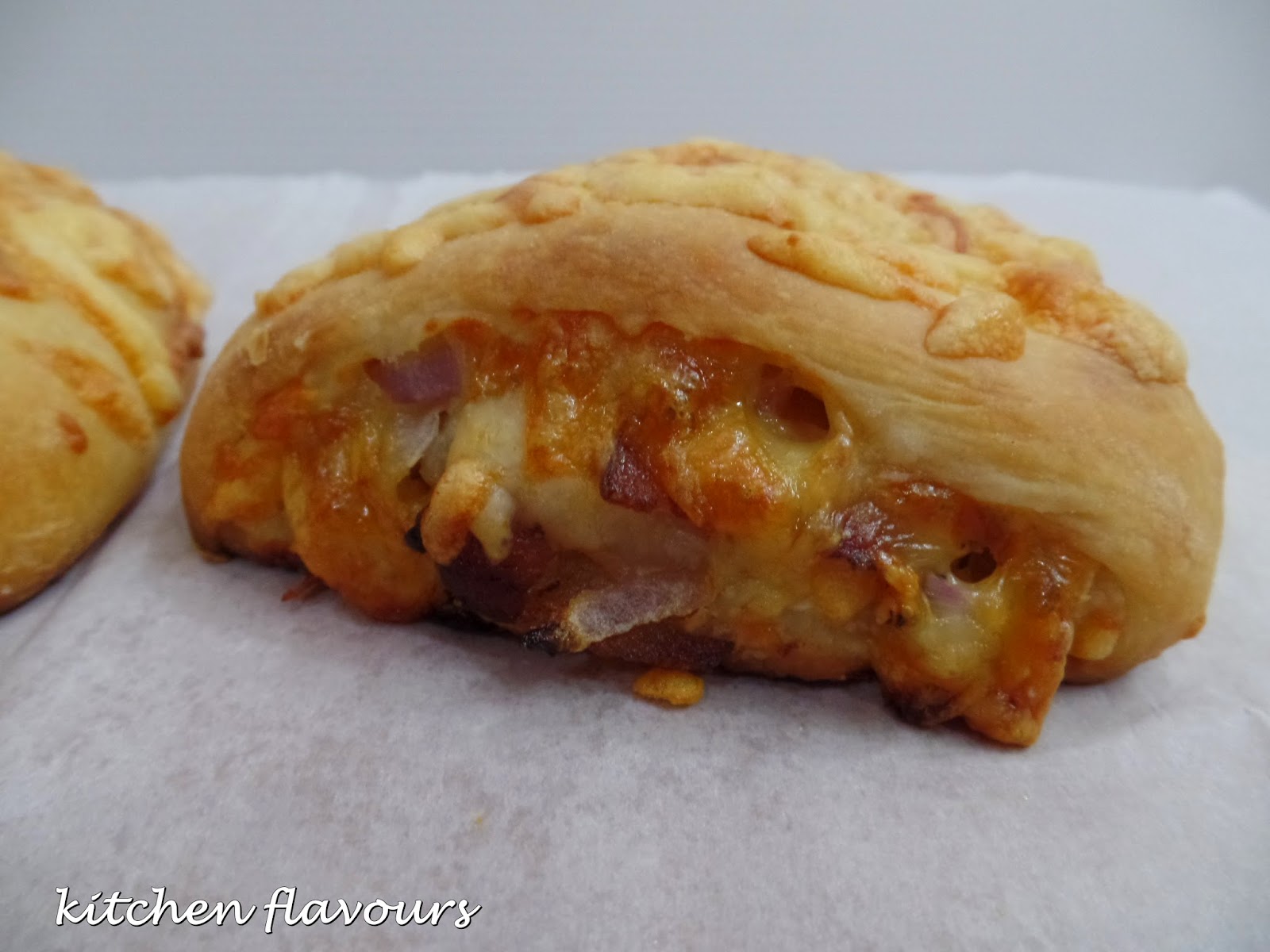 Smells really delicious as these were baking, and I could not wait to bite into one! Bacon, onions and cheese! I put on the kettle to make a pot of tea! haha! 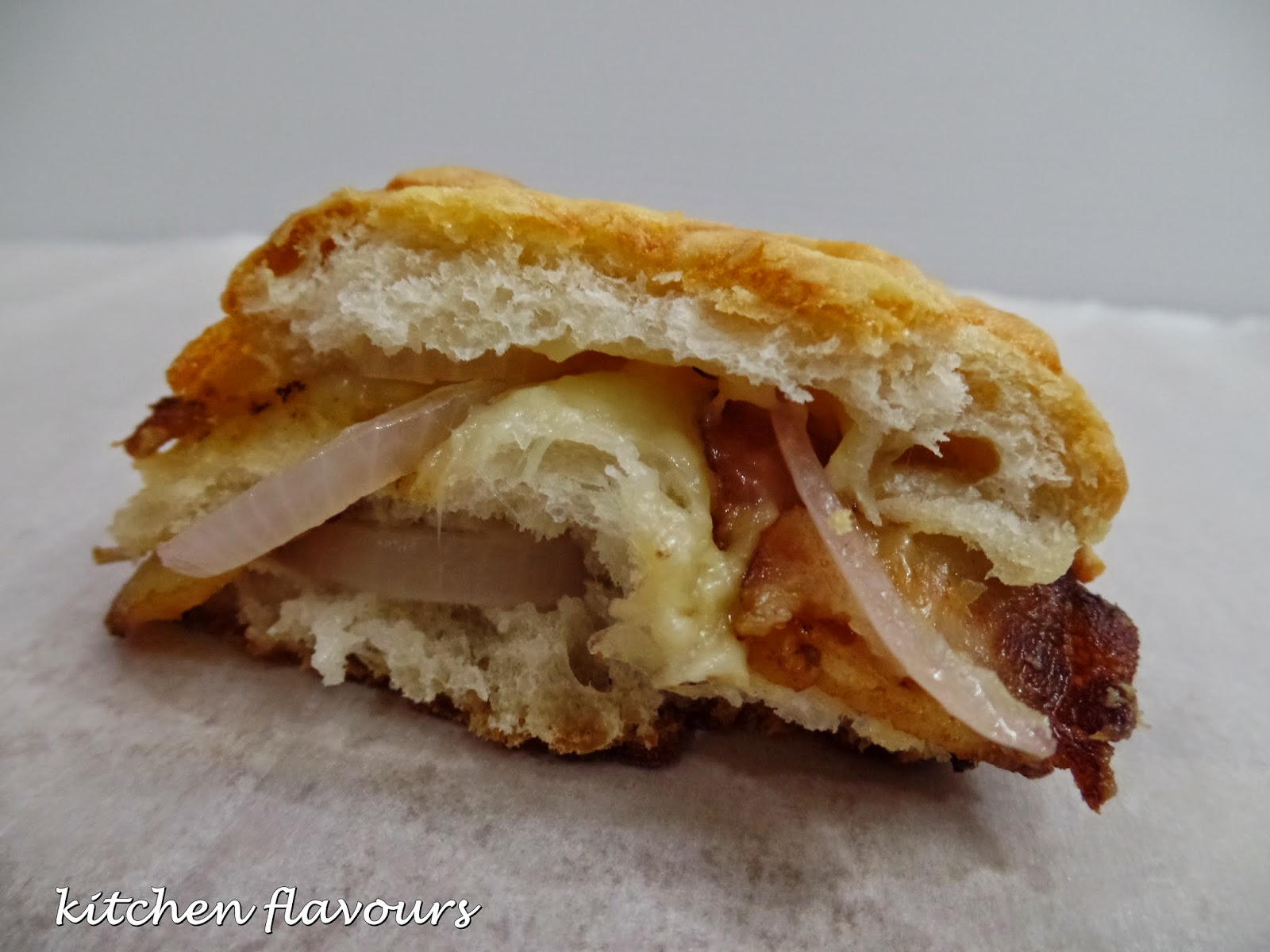 Eat it while still warm, delicious! And smells delicious too! 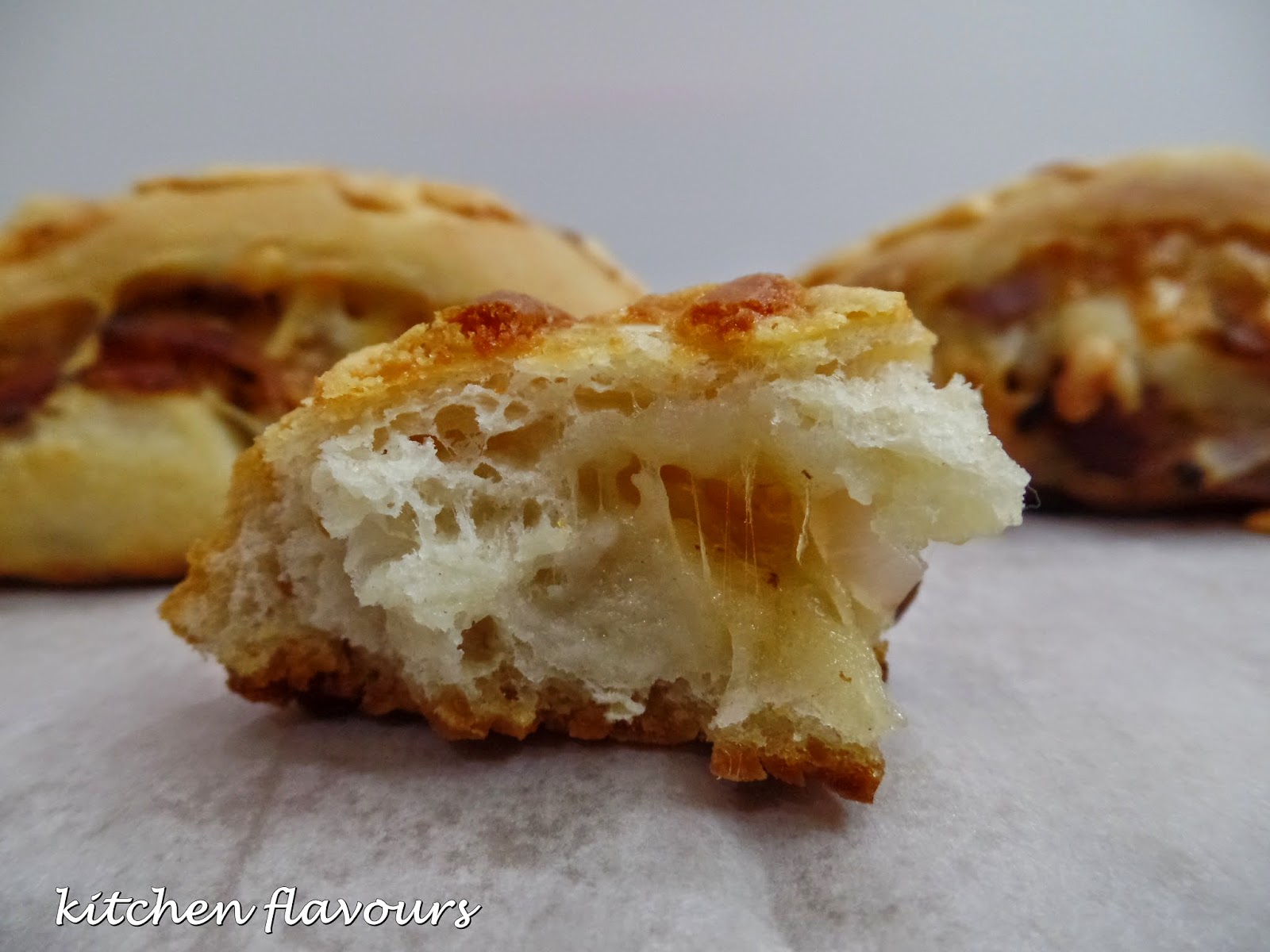 The cheese over the top has melted and baked to a delicious crispy crust. I may have overbaked the bottom part of the bread, and it has turned golden brown and crispy, which really is a good thing actually, as when you bite into the bread, the top and bottom is really crispy, with the crumbs in the centre soft, chewy and so delicious with the salty bacon, cheese and sweet onions. Yummilicious! Two of these for lunch and I'm a happy gal!


Place flour, salt, oil, sugar and yeast in a large mixing bowl. Add water and, using a wooden spoon, combine the ingredients to form a dough mass. Tip dough out onto a lightly floured surface and knead for 10-15 minutes, resting for 1 minute every 2-3 minutes, until dough is smooth and elastic.

Line a baking tray with baking paper. Gently tip dough onto a lightly floured work surface and, using a rolling pin, roll out to a 75cm x 15cm rectangle. Position the dough rectangle on the work surface with the long edge facing you. Sprinkle dough evenly with grated cheese, onion and strips of bacon. Fold top edge of dough slightly more than halfway down over the filling. Using a pastry brush dipped in water, brush the folded dough surface. Then fold the bottom dough edge with its filling upwards to just cover the wet surface, so that the filling is now encased in dough. Lightly press down with the palm of your hand to seal. Lightly flour the sealed surface and roll the strip of filled dough over so the seam is on the bottom.


Use your hands as guides to make sure the long strip of filled dough is nice and straight. Using a large chef's knife, cut the strip into 6-8 pieces. Place each piece onto the prepared baking tray, leaving approximately 3cm between each one. Brush the tops with water and sprinkle remaining 100gm grated cheese evenly over the surface.

Cover loosely with plastic wrap and leave to stand in a warm place for approximately 30 minutes. Remove plastic wrap and place filled dough pieces in a preheated 230C oven, apply steam (I preheated a roasting pan and after placing the dough in the oven, I throw some ice cubes into the roasting pan), and quickly close oven door. Bake for 20-25 minutes until golden brown. Remove from oven and place on a wire rack to cool slightly. Eat while warm.

Posted by kitchen flavours at 12:43 AM