This homemade Oxford Marmalade is exactly what it is supposed to be, sweet, bitter and full of chunky bits of the orange peel and the juicy flesh. My MIL gave me about a dozen oranges, two or three different varieties, and these are definitely not Seville oranges, which are recommended to use for making Oxford Marmalade. I use half of them to make this marmalade which has been on my "list of to do jams and preserves" for soooo long! If I had known that it would turn out this good, I would have made this ages ago! 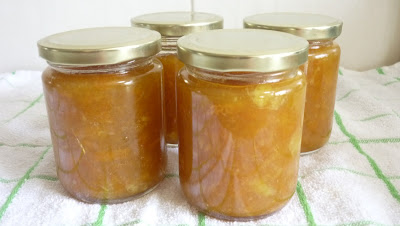 The only thing is, these oranges turned out to be seedless oranges! Without the pips (seeds), where pectin is needed to set the jam, I thought the peels would be enough.  But after adding the sugar and simmering for more than 45 minutes, it still doesn't show signs of thickening. So I added in about 3 teaspoon of powdered pectin, and simmer for a further 10-15 minutes before it starts to set.  I do not like my jam to be too thick, I like it slightly on the runny side, so it is just perfect for me. If you like your jam really thick, then add an extra teaspoon of pectin and simmer a little longer. 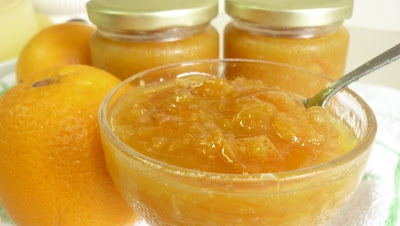 I reduced the amount of sugar to only 1-3/4 cups from the original 6-1/2 cups! That's rather drastic, isn't it? But believe me, it is sweet enough! Try adding the sugar a quarter cup at a time until it reaches your desired sweetness. The peels are soft and tender and there are chunky bits of the orange flesh. I remove the white pith before chopping the flesh to large chunks. 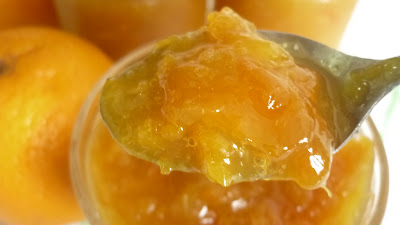 This is a delicious marmalade!
I'm sharing this with Recipe Swipe Thursday at Prairie Story and
Cookbook Sundays at Brenda's Canadian Kitchen
Oxford Marmalade
(adapted from "50 Step-By-Step Homemade Preserves" by Maggie Mayhew)
The characteristics caramel colour and rich flavour of a traditional Oxford marmalade is obtained by cutting the fruit coarsely and cooking it for several hours before adding the sugar.
(Traditionalists say that only bitter oranges such as Seville should be used to make marmalade. Although this isn't always true, it is most certainly the case when making Oxford marmalade).

Posted by kitchen flavours at 2:37 PM