"Cook Like A Star", an event organized by my baking buddy, Zoe from Bake For Happy Kids is a bi-monthly event where a celebrity chef will be featured for the whole month, and everyone is free to cook or bake from the chosen celebrity chef's recipes and join in the blog-hop fun! For this month of July, the featured chef is Jamie Oliver. I'm sure EVERYONE knows who Jamie Oliver is!
Years ago when I first watched his cooking shows on TV, I find him a very "messy chef" LOL! There was one episode, when I watched him, opened his kitchen window, which is facing the busy street below, snipped off some herbs and straight into his cooking pot! He did not rinse them first, surely there must be some dust outside the kitchen window right above the busy street! And he mixes his minced meat with whatever ingredients or seasonings he added in, with his hands! And that's not all, he even toss a bowl of salad with his hands! At first, I was like, argh.... I would never use my hands to mix mince meat together! But then, he is Jamie Oliver, and that is his fuss-free style! And now, he is one of my favourite chefs today! *~* 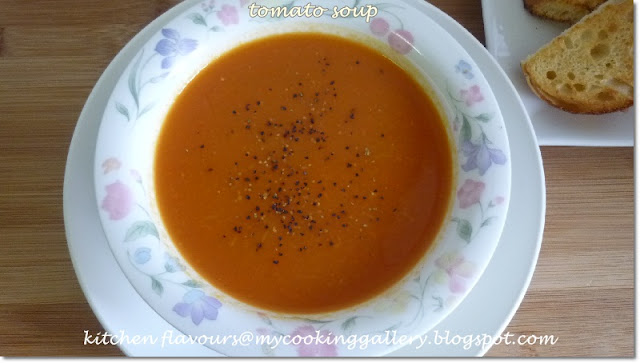 To join the blog-hop fun, I've made Jamie's tomato soup. This is a lovely soup, but then it is not as creamy and thick as the soups that I've eaten from western restaurants. I think those restaurants must have added some thickener to the soup. And I guess that the quality of the tomatoes definitely plays the top role in making a thick and creamy soup. I did not use plum tomatoes, since the store near my place do not have them and even if I do find them, it is very costly, Roma Tomatoes costs about more than RM30/kg, our local tomatoes are priced at RM2.90/kg, see the difference? So I used our local ripe tomatoes instead. Our local tomatoes are not as fleshy as the plum tomatoes, in fact they contain more juice, so that makes the soup not as thick. 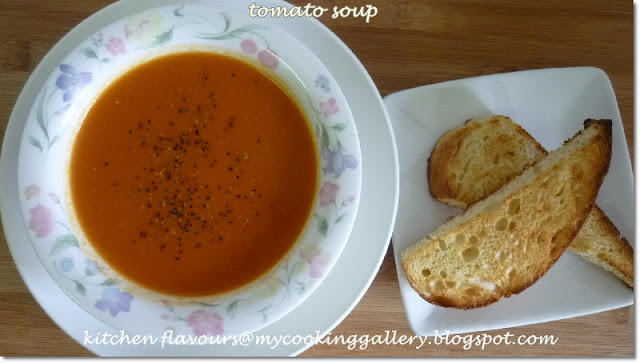 Nevertheless, with lots of seasoning of salt and pepper, as advised by Jamie, this makes a lovely soup. I used my homemade chicken stock, the last batch! Argh... I hate it when I use my last batch of homemade stock, that means that I have to make a fresh batch, and I do not like making stock, it takes a few hours to cook, cool, divide into containers, label and store! But once that's done, it is a relief to know that I have ready made stock at hand whenever I need! OK , back to my soup, we had the tomato soup with my homemade Cheddar Cheese Bread which I toasted till crispy, which is wonderful with the soup. This recipe makes quite a lot, we had this again with toasted bread the next day for lunch, and my kids was looking forward to the leftovers! The soup gets a little thicker and tastier the next day too!
I'm submitting this to : 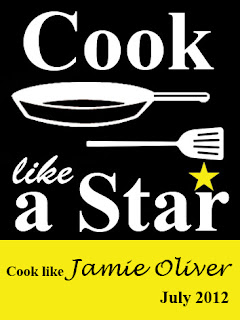 Cook Like A Star hosted by Bake For Happy Kids
I'm sharing this too with :
Cookbook Sundays hosted by Couscous & Consciousness
Recipe Box hosted by Bizzy Bakes

To make your soup :
Peel and roughly slice the carrots. Slice the celery. Peel and roughly chop the onions. Peel and slice the garlic.
Put the broth in a saucepan and heat until boiling.
Put a large saucepan on a medium heat and add 2 tablepsoons of olive oil. Add all your chopped and sliced ingredients and mix together with a wooden spoon. Cook for around 10 to 15 minutes with the lid askew, until the carrots have softened but are still holding their shape, and the onion is lightly golden.
Add the boiling broth to the pan with your canned and fresh whole tomatoes, including the green stalks that may still be attached to some of them (these give an amazing flavour-trust me!)
Give it a good stir and bring to a boil. Reduce the heat and simmer for 10 minutes with the lid on. Meanwhile, pick your basil leaves.

To serve your soup :
Remove the pan from the heat. Season with salt and pepper and add the basil leaves. Using an immersion blender or liquidizer, pulse the soup until smooth. Season again before dividing between your serving bowls.

Posted by kitchen flavours at 6:00 PM