This bread is called Thirty-Minute White Bread because it is left to rise in the oven for thirty minutes and then bake in a cold oven. If you're looking for a quick white bread to make, you might want to give this a try. I like this bread as it makes a great toast! This recipe is from Bernard Clayton's "New Complete Book of Breads", a wonderful book with lots of recipes on various types of bread. 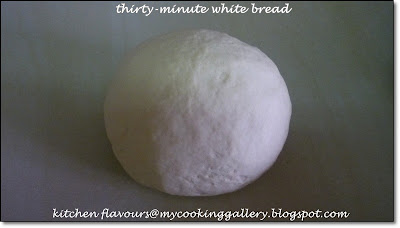 A very easy and quick bread to make if you want some bread to have later in the day. Options are given in the book on methods of making this bread, either by hand, the stand mixer or the food processor. I chose the stand mixer to mix the dough. I made half a recipe for a small loaf. Due to our hot humid weather over here, I have reduced the amount of water slightly as I do not want to end up adding in more flour. I have noticed that most of the breads in this book uses a fair amount of salt, so I've reduced the salt by half, which turns out just right. After the dough is formed, as above, it is shaped into a round, and let rest for 5 minutes, covered with a piece of cloth. 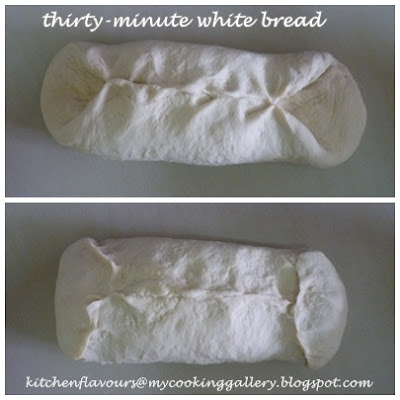 The dough is then shaped into an oval, to the length of the loaf pan,  fold in half, pinch the seams tightly, tuck under the ends on both sides and place it in the greased loaf pan, seam side down. 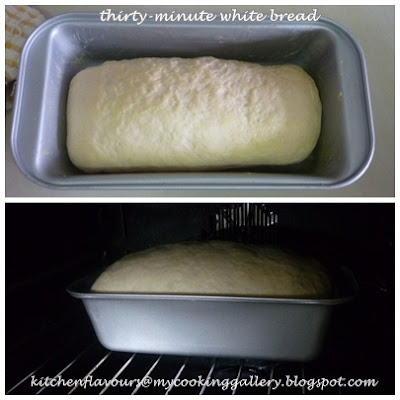 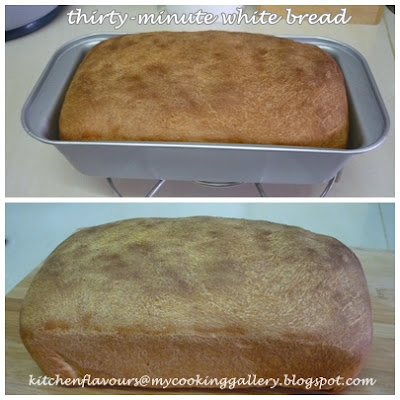 After 30 minutes of rising, turn on oven once again at 200C and bake for 40-45 minutes until bread is done. Immediately remove from pan and leave to cool on wire rack. 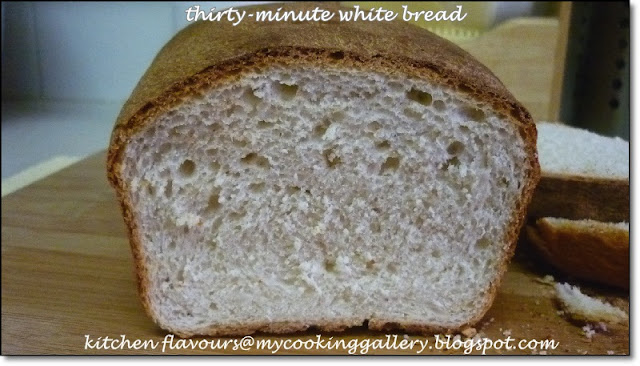 This is a lovely and tasty bread. It does not have the fluffiness like some white breads do, but it is still soft with crispy crust. And it is tasty enough to be eaten a slice on its own with just a cup of tea. This is not a good keeper, as it gets stale rather quick. But I do not mind, as this bread is excellent toasted. It gets incredibly crispy when toasted and so delicious with a spread of butter and kaya (our local egg jam) or any of your favourite jam. A bread that I would not mind making again, just to toast for breakfast.

I'm sharing this with BYOB, Bake Your Own Bread, hosted by Girlichef. BYOB is a monthly bread baking event that is open to anyone who loves baking bread. Whether you are baking bread once a month or very often, link your bread to BYOB! And whether you are making yeasted breads or breads without yeast, or if you have anything informative about bread that you would like to share, it's all happening at BYOB. Link your post to BYOB! Two exciting news is, Girlichef will have two new co-hosts of BYOB starting from this month, and the second news is BYOB will implement an Optional Featured Bread Blog. For more information about Bake Your Own Bread (BYOB) and how to link up, drop by Girlichef for the full details.


And I'm sharing this too with :
Recipe Box 3 hosted by Bizzy Bakes
Cookbook Sundays hosted by Couscous & Consciousness


By hand or mixer (8 mins)
Warm the milk in a saucepan to soften the shortening or butter for a few moments. Add the salt and the lukewarm water. Add the yeast and sugar and stir to dissolve.
Stir in 2 cups flour and beat for 3 minutes at medium speed in an electric mixer or 150 strong strokes with a wooden spoon. Gradually add 2 more cups flour, and continue beating for 3 minutes, or 150 strokes.
Turn off the mixer and add about 2 more cups flour. Work it in with a spoon, and when it becomes stiff, with your hands. When the dough has a rough form and is cleaning the sides of the mixing bowl, turn it out on the floured work surface.


Kneading (8 mins)
Knead for about 8 minutes with a strong push-turn-fold motion. Occasionally throw the dough hard against the work surface (stimulates the gluten). Or replace the dough in the mixer bowl and put under the dough hook for an equal length of time.


Shaping (10 mins)
Divide the dough in half, and shape the balls. Let rest under a cloth for 5 minutes.
Form the loaves by pressing each (with your palm or rolling pin) into an oval, roughly the length of the baking pan. Fold the oval in half, pinch the seam tightly to seal, tuck under the ends, and place seam down in the pan. Brush the loaves with the melted butter.


Baking (400F - 45 mins)
About 30 minutes later, turn the oven to 400C and bake for 45 minutes or until the loaves are brown. When done, they will sound hollow when tapped on the bottom crust with the forefinger. If the crust is soft, return to the oven, without the pans, for 10 minutes.
(If using a convection oven, reduce heat 50F).


Final Step
Place the loaves on a metal rack to cool.
The bread is fine for sandwiches and toast. It also freezes very well.


kitchen flavours notes :
I made half a recipe with the following adjustments :
~ use only 1/2 teaspoon of salt (original 1 tsp), which turns out just the right taste of saltiness.
~ due to our hot and humid weather, I have reduced the amount of water to only 1/3 cup (original 1/2 cup)
Posted by kitchen flavours at 8:00 PM