"Icy Cold", the theme for this week at I Heart Cooking Clubs (IHCC), our second week of cooking with Diana Henry recipes. This week is all about "frozen treats, cold beverages and other icy cold treats". Icy treats are always welcome anytime in my house, as the weather is always hot over here!  I've selected a cold jelly dessert, perfect to serve the family as an after dinner treat, cooling and refreshing. 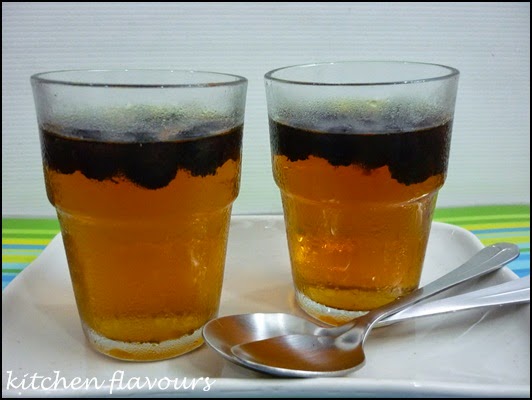 This recipe, from her cookbook, "Plenty", was originally called "Blood Orange and Cardamom Jellies", and Apple and Blackberry Jellies is another variation which she has provided in the book. I do not have any blackberries, but I do have frozen blueberries in my freezer, so I've used that instead. And I've used unsweetened Apple Juice which is heated over medium-low heat, with a cinnamon stick and some sugar, stir until the sugar is dissolved. The cinnamon stick is then discarded and the pre-soaked softened gelatine* (which I've soaked with half cup of the apple juice for about 10-15 minutes) is added. Stir until the gelatin has completely dissolved. Pour into glasses, the ones I've used has a capacity of 6oz (about 180ml), drop in some of the frozen blueberries, keep aside to cool and refrigerate for 24 hours until the jellies has set. The jelly would be wobbly when the glass is lightly shaken.


* Note : The recipe uses gelatin sheet, but I've used gelatin granules. Thanks to David Lebovitz, after conversion, I've used about 3-1/2 teaspoon of gelatin granules to set 1 litre of apple juice (or any liquid) for a soft set, which is meant to be eaten using a spoon, not suitable to unmould. 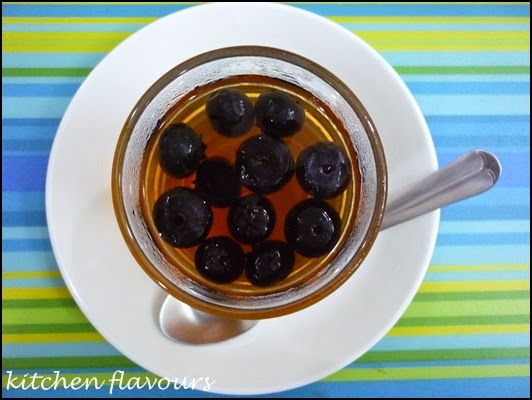 At first I thought that the frozen blueberries would bleed when dropped into the hot liquid, and I tried with one glass first, waited for a few minutes and surprisingly the hot liquid are not tinge with blue from the berries! So, I dropped the rest of the blueberries into the remaining 5 glasses. Allow the jellies to cool, then refrigerate. 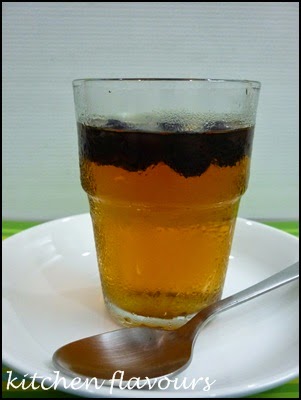 Best refrigerate the jellies for 24 hours. They will still be wobbly when the glass is lightly shaken. The texture is soft and mushy, just perfect for a soft set. We had this cooling yummy dessert after our dinner meal and it was good! The next time, I will make this again, using other flavour variations mentioned in the book.


Pour  half cup of apple juice into a medium bowl. Sprinkle powdered gelatin over and set aside for 10-15 minutes.
Meanwhile place the balance apple juice in a medium pot over a medium heat, add the cinnamon stick and sugar to taste, stirring until the sugar has completely disssolved.
Discard the cinnamon stick, remove from heat, add the gelatin mixture, stir until the gelatin has completely dissolved.
Pour into glasses, drop in some blueberries into the apple juice, keep aside to cool, then refrigerate overnight until jelly has set. This is a soft-set jelly, meant to be eaten with a spoon (not suitable to unmould).

I'm linking this post with I Heart Cooking Clubs (IHCC), theme for this week, "Icy Cold".

"My Treasured Recipes #3 - Taste of Autumn (Oct/Nov 2014)" hosted by Miss B of Everybody Eats Well In Flanders and co-hosted by Charmaine of Mimi Bakery House.

Posted by kitchen flavours at 2:30 PM