"October Potluck", the theme for this week at I Heart Cooking Clubs (IHCC). For this week, I've made a salad recipe of Yotam Ottolenghi (YO), which I have been wanting to make ever since our time with Ottolenghi more than a year ago! 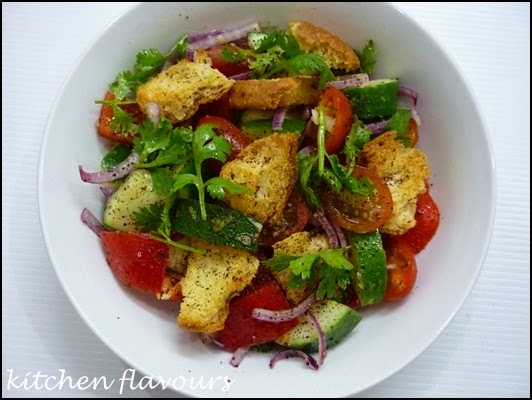 YO has indicated in the recipe to use either sourdough or ciabatta bread, which is toasted with some olive oil and salt, until crispy and brown. I have however used my leftover homemade bread which I stored in the freezer and really needed to clear.

The veggies ; It was noted in the recipe that this salad is only worth making when tomatoes are in season and full of flavour. I have used cherry tomatoes instead, as cherry tomatoes are sweet and I love them in salads. Other veggies; cucumber and coriander from my garden, red onion, red pepper, crushed garlic. Toss the veggies with red wine vinegar, olive oil, grated zest and juice of half a lemon, with some salt and black pepper to taste. Just before serving, mix in the toasted bread, mix gently with a spoon, though I do not understand why YO advised using your hands for this step! Using a spoon works rather well, and hygienic too! Sprinkle with some sumac and dig in! Ooh, this is so good! The toasted bread is so crunchy and delicious. I cannot remember the name of the bread that I've made, but it has a light sweetness to it, and extremely delicious when used in this salad! All the veggies and the red onion are wonderfully crisp. This salad is zesty and tangy alright, from the lemon zest and juice, and with the red wine vinegar. And the sumac, I would not skip it! Simply wonderful with the sprinkling of sumac. I can see how this salad is great alongside a piece of slightly charred meat from the barbecue as mentioned by Ottolenghi. I had this with some chicken dish. I will definitely make this salad again.

This salad is only worth making when tomatoes are in season and full of flavour. It should be acidic and tangy, and will taste amazing alongside a piece of slightly charred meat from the barbecue. Serves four.

Method :
Preheat the oven to 170C/325F/gas mark 3. Spread out the bread on a roasting tray, brush with olive oil and sprinkle with some flaky salt. Bake for 20 minutes until crispy and golden, then leave to cool. Mix all the other salad ingredients and adjust the seasoning to taste. Just before serving, mix in the toasted bread, using your hands.

I'm linking this post with I Heart Cooking Clubs (IHCC), for this week's theme, "October Potluck". 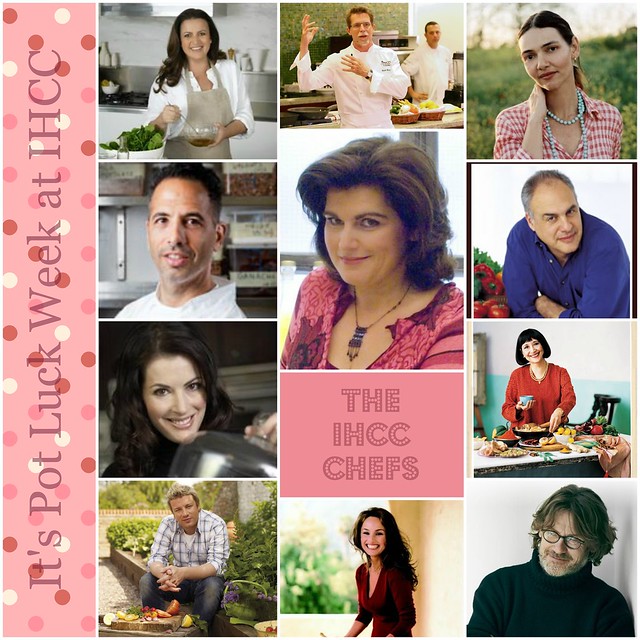 Posted by kitchen flavours at 12:10 PM