Our second bake from "Baking Chez Moi" by Dorie Greenspan, at Tuesdays With Dorie (TWD). A lovely tart, with a buttery crust, spread with a layer of jam, and topped with egg white meringue which is mixed with fresh cranberries. Unfortunately, fresh cranberries are not easily available over here in Malaysia, and I could not find any frozen ones too, so I've used dried cranberries. 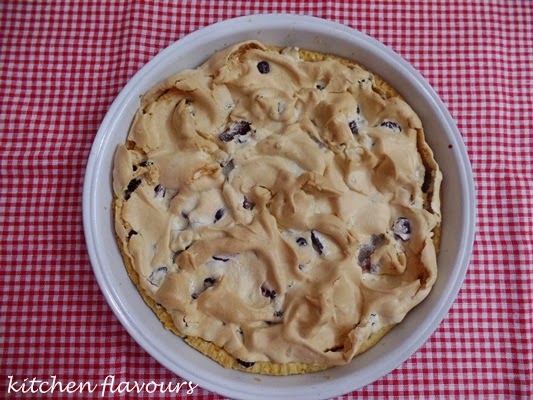 According to Dorie, when the tart is done baking, the top will be light beige and most probably cracked here and there. Well, there's some cracks here and there on my tart, mostly at the sides, but the meringue bakes up with a darker shade of beige, I would prefer if it is a little lighter!

The recipe has given an option to make the crust using either the Sweet Tart Dough or Galette Dough, and I have chosen the latter, as it has lesser sugar, lesser butter and no eggs. The crust is made in the food processor, roll out to fill the pie pan, freeze for at least 30 minutes, and bake as instructed in the recipe. I have used a tablespoon less of the water calls for in the recipe, as our weather here is hot and humid, and I find that I tend to use less water than stated in most recipes, sometimes not at all, when I'm making dough crust for pies and tarts. When the crust is at room temperature, spread some chunky jam, of which I have used lingonberry preserves. I've used more preserves to cover the crust base, more than the recipe calls for. Make the meringue by beating the egg whites with some sugar, which I've reduced slightly. Fresh cranberries are then added in. I've used dried cranberries. (soaked in some hot water until they plumped up, about 45 minutes, drain and left them in the sieve for about an hour, to make sure they are dry). Spread the meringue over the jam, making swirls if desired, and bake for an hour until the meringue is light beige. 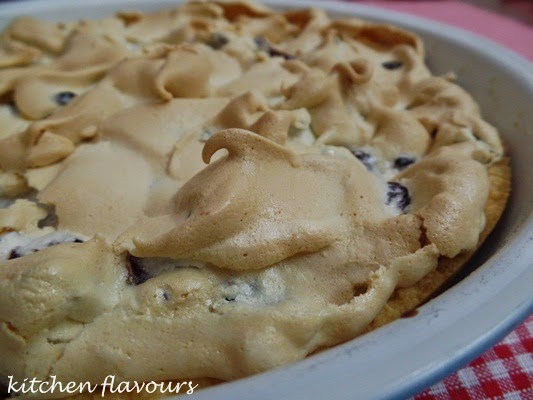 The meringue was already starting to brown at the 20 minutes time of baking, so I've tented the top with foil, reduce the temperature by 10 degrees,  and continue baking till done. I've added 10 minutes to the baking time. 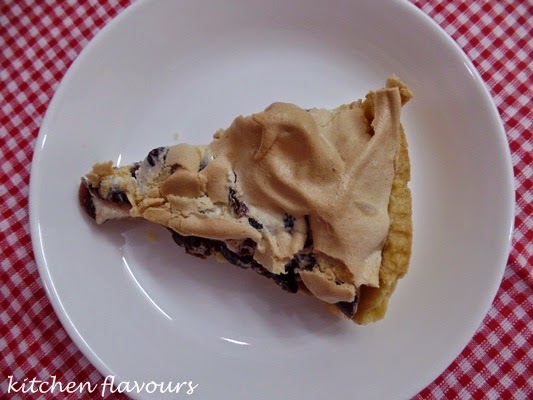 The meringue bakes up crispy nice. Using dried cranberries works out great, though I think that with fresh cranberries would be even better! And I like the buttery crust, with the balance of the dough scrapes, as Dorie suggested, I've made two turnovers, filled with my homemade apple jelly. Really, really, yummy. The dough makes great turnovers, really flaky, tender and buttery. 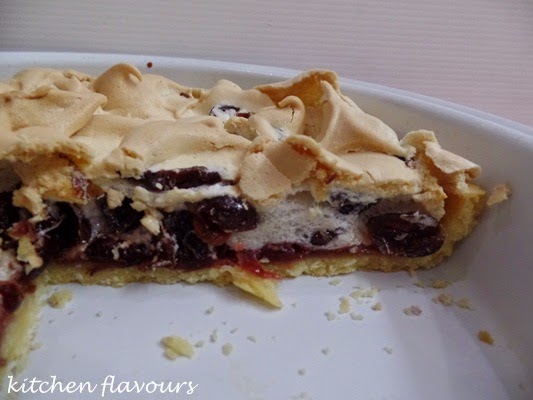 The recipe for this tart can be found at Dorie's website, or better still get the book! To view the other bakers take on this lovely tart, do stop by TWD blogroll.

Posted by kitchen flavours at 11:36 AM