Dorie has given a few different ways (by way of ingredients) of making this chowder, with whichever vegetables and herbs as they come into season. 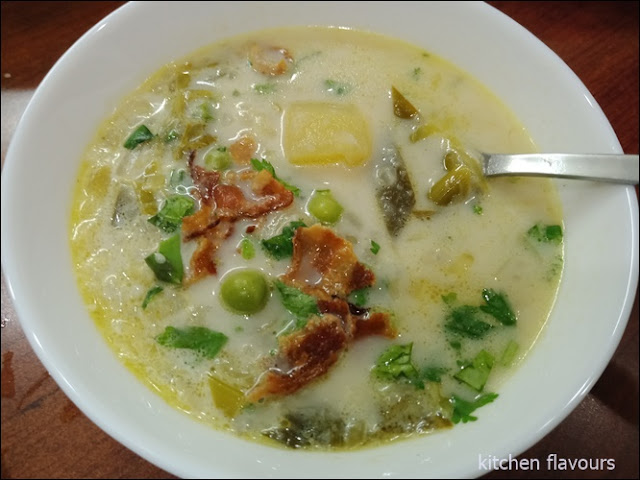 Thinly sliced leeks, onions, shallot and garlic are sauteed in the bacon fat or oil until softened, then add the vegetable or chicken stock, together with the potatoes, let it boil, then simmer until the potatoes are tender. (I wonder how many of us actually rinse the thinly sliced onions, shallots and remove the germ of the garlic cloves. I did not.) As suggested by Dorie, I mashed some of the potatoes to add another texture to the soup. I've added some peas, and I actually bought a pack of sweet peas to add along, but completely forgotten all about it! Just before serving, stir in some cooking cream and heat without boiling. Spoon into serving bowls and top with some chopped crispy bacon and some chopped fresh herbs, which I've used cilantro.


We thought that this chowder is delicious and full of flavour! I've tasted with and without the cream, definitely with the cream! Next time I'll cut the potatoes into smaller cubes, instead of bite-sized pieces. I'll be cooking this again, and as Dorie suggested, lots of ways, with other veggie add-ins!

Posted by kitchen flavours at 9:39 PM