This month's selection at Cook the Book Fridays where we are currently cooking from Everyday Dorie, is Salmon Burgers.


Thanks to the feed-back from the lovely ladies at CtBF, that the salmon mixture was very soft, and the burger patty was not holding on to it's shape during frying, I've made some adjustments to the ingredients. The burger mix ingredients are ; chopped salmon fillets, Greek yoghurt, chopped herbs (of which I've used scallions, dill,  and cilantro), Dijon mustard, grainy mustard, capers, lemon zest, salt and pepper.  I've reduced the amount of sour cream (instead of Greek yoghurt as in the recipe), probably using only half the amount, I did not measure. Even then the mixture is still very soft. I added 2 tablespoons of cornflour to bind the mix together. The mix is then refrigerated for at least 2 hours. 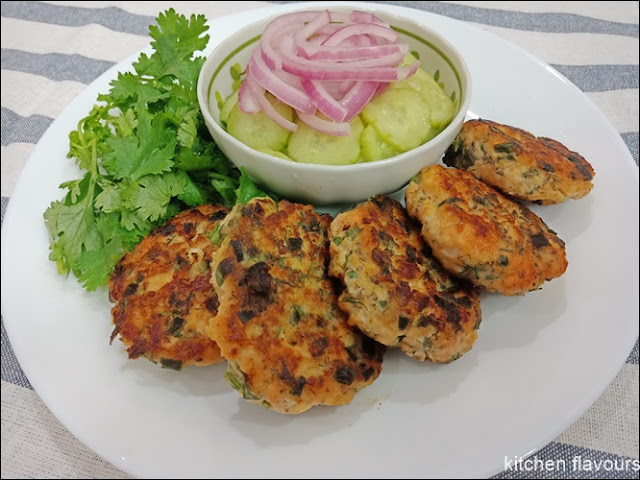 The salmon mix is then formed into burger patties. Even after chilling, it was still on the soft side, I find that it needed more cornflour to firm it up a little. So I've added 2 more tablespoons of cornflour to the mix. I formed them into smaller patties and fry them on both sides until brown. These patties hold their shape and did not fall apart.  I made the onion pickles and cucumber pickles as suggested by Dorie.  But instead of using the patties to make Salmon Burger Buns, we ate the patties as part of our meal with rice.

This post is linked to :
Cook The Book Fridays (CtBF)
Cookbook Countdown #40

Posted by kitchen flavours at 10:26 PM