Sauteed Potatoes with Parsley and Garlic

After a twelve months break from cooking with the lovely ladies at I Heart Cooking Clubs (IHCC), I'm back, and hopefully I will be posting more often, as I have not been blogging as frequently as I used to. IHCC cooks with a selected chef every six months, but for this time round, there will not be any new chef selected. It is IHCC's ten years anniversary, and they are welcoming back all of the 19 chefs that were featured for the last ten years ; Nigella Lawson, Mark Bittman, Giada de Laurentiis, Jamie Oliver, Tessa Kiros, Rick Bayless, Madhur Jaffrey, Yotam Ottolenghi, Donna Hay, Nigel Slater, Diana Henry, Jacques Pepin, Ellie Krieger, Curtis Stone, Heidi Swanson, Hugh-Fearnley Whittingstall, Ina Garten, Eric Rupert, and Ruth Reichl. Pretty impressive list of chefs!

I've just received two new addition to my cookbooks (yay!) Essential Pepin by Jacques Pepin, and Provence To Pondicherry by Tessa Kiros. So many recipes I want to try! For a start, I made two easy recipes from Jacques Pepin, Sauteed Potatoes with Parsley and Garlic, and Romaine with Creamy Yoghurt Dressing. 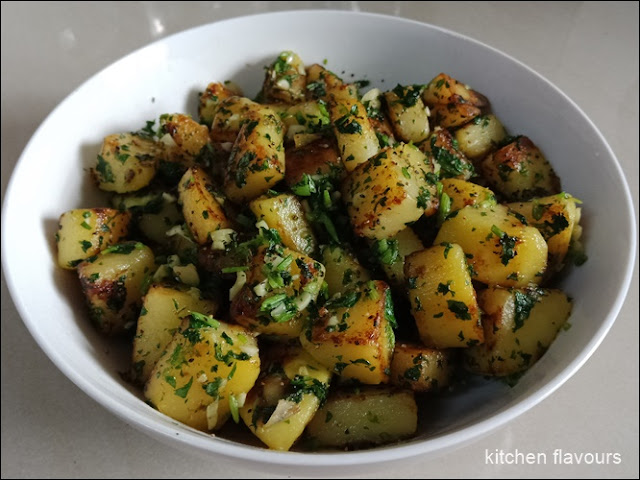 Sauteed Potatoes with Parsley and Garlic


Easy and quick, makes a nice side dish. Chopped potatoes are stir-fried in oil until cooked and brown all over. Parsley leaves (I've used fresh cilantro), and a few cloves of garlic are chopped together until finely minced. These are added to the cooked potatoes in the pan, tossing to combine and season with salt and black pepper. I could eat this on it's own! 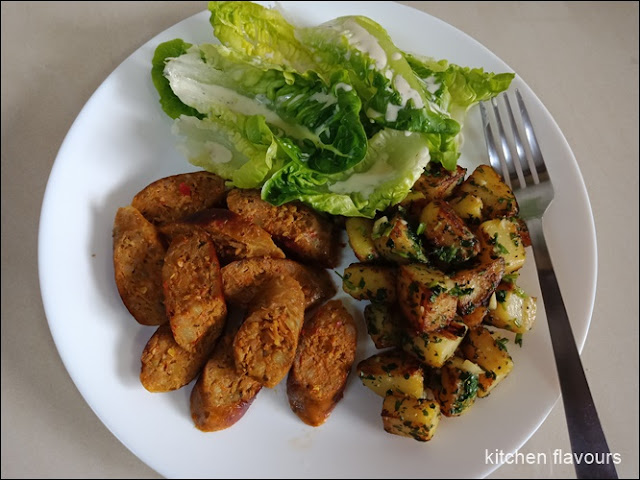 I like this yoghurt dressing, it is light, creamy, cool and refreshing, just as Jacques Pepin says. I've used my own homemade yoghurt. Whisk the yoghurt together with white wine vinegar, salt, black pepper until combine, then whisk in the olive oil. Drizzle over the romaine and toss just before serving.

Both the Sauteed Potatoes and the Romaine are served alongside some Spicy Pork Sausages.

Cut the potatoes into 3/8-inch cubes. Put in a sieve and rinse well under cool water. Transfer to a bowl, add water to cover, and set aside until ready to cook.
Heat the oil in a large nonstick skillet. Drain the potatoes, pat dry with paper towels, and add to the hot oil. Saute over high heat for 12 to 14 minutes, stirring occasionally, until the potatoes are browned on all sides.
Meanwhile, chop the garlic and parsley together until finely minced.
Add the salt, pepper, and parsley mixture to the potatoes in the skillet, tossing to combine, Serve.

Whisk together the vinegar, salt, pepper, and yoghurt in a bowl large enough to hold the lettuce. Whisk in the oil.
Add the lettuce to the dressing and toss until coated. Sprinkle on the fresh herbs and serve immediately.