The first time I've seen this bread was from Hanaa's Kitchen and I knew that I will be making this bread, sooner or later. Hanaa got the recipe from Nick Malgieri's blog here. Nick Malgieri is sharing two recipes, a sneak preview from his latest book "BREAD" which will be out in September 2012.

This recipe makes two loaves and I'm glad that I did not make half the recipe! It smells really nice while baking in the oven and as soon as they are cool enough, I sliced one loaf and could not stop eating at just one slice! It was so good, especially fresh from the oven! The texture is soft, moist and very tasty! Nick uses two types of raisins, dark and golden. The original recipe uses 3 cups of mixed raisins, which I think is a little too much for me, so I only use 2 cups, and it turned out just right! Nick Malgieri described this bread as "nothing fancy about this bread but a slightly sweetened and enriched white bread loaded with dark and golden raisins, and they'll be gone before you know it"! I couldn't agree more!

It is a really simple and easy bread to make. If you have a stand mixer, then you are good to go! Here, I've taken some photographs and you can see how easy it is! 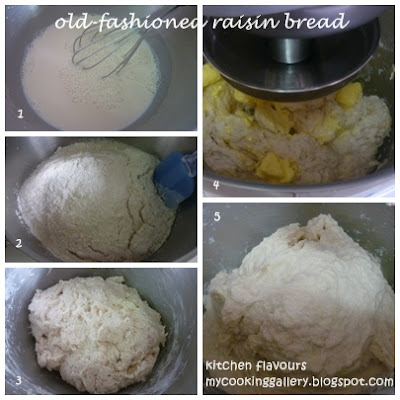 1.  First, whisk the water and yeast together, then whisk in the cooled scalded milk.
2. Flour, sugar, salt are added in.
3. Stir with spatula to a rough dough.
4. Distribute pieces of butter all over top of rough dough.
5. Using the mixer fitted with dough hook, mix on lowest speed until butter is absorbed, about 2 minutes, and increase speed to low/medium and mix until dough is smooth and elastic, another 3 minutes, (mine took about 8-10 minutes). Decrease speed to lowest and add in raisins a little at a time, until the raisins are evenly distributed in the dough. 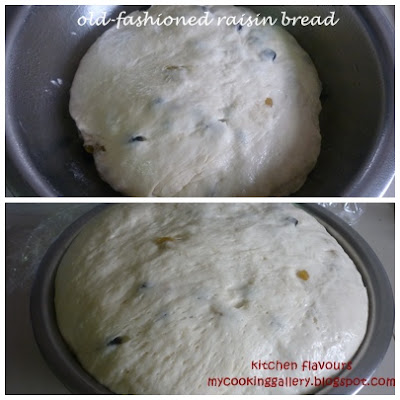 Scrape dough onto a work surface and knead briefly to ensure that the raisins are evenly distributed in the dough. Place dough in into a buttered or greased bowl, turn it over so the top is coated. Cover with plastic wrap and leave to rise until doubles in size, about an hour. 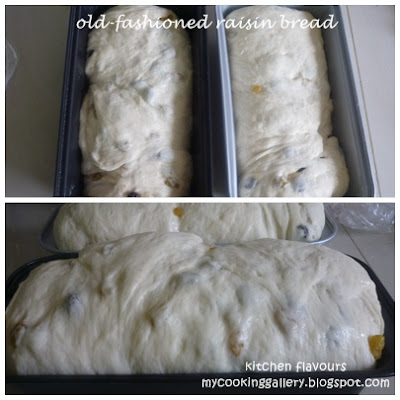 Invert risen dough to a lightly floured work surface and cut into 2 equal pieces. Gently pat each piece into a rough square and roll it from the top down., into a tight cylinder. Pinch the sides and place in greased loaf pans, seam side down. Cover with greased plastic wrap and leave to rise until dough has risen about an inch above the edge of the pans. Remove plastic and bake in a preheated oven (refer nstruction for the temperature in the recipe below). 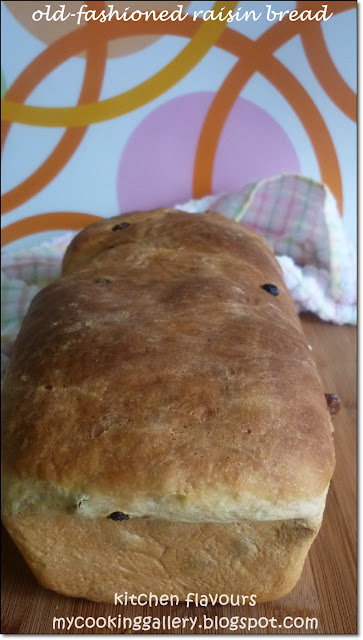 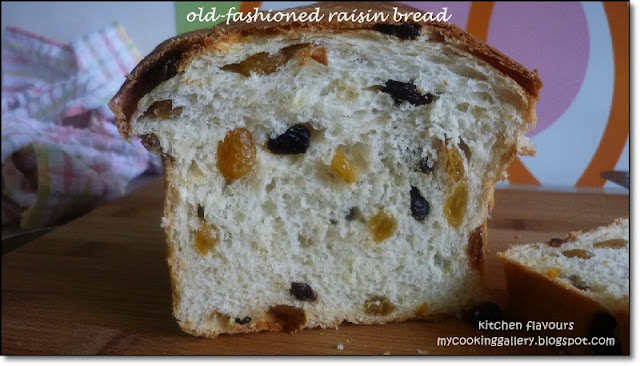 Nice, plump moist raisins, with soft, moist and fluffy bread. This bread is a winner! 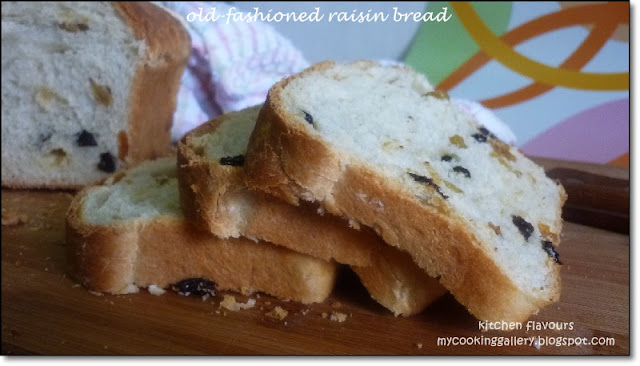 Good eaten on its own!

I'm sharing this with :
BYOB, Bake Your Own Bread hosted by Girlichef
Bake with Bizzy hosted by Bizzy Bakes

Posted by kitchen flavours at 9:30 PM