Sometimes simple is the best! Just like this plain white bread. Soft, fluffy and tasty enough to eat it just as it is. This fantastic bread is from Nick Malgieri's newest book simply titled "BREAD". I ordered this book months ago before it was released, as I have tried one of the preview recipes, Old-Fashioned Raisin Bread, that Nick Malgieri posted on his blog, here, and that bread totally won me over! So has this Golden Sandwich Bread! This bread was chosen as a casual bake with my baking buddies, Lena and Zoe, and both of them have given this bread thumbs up as well. 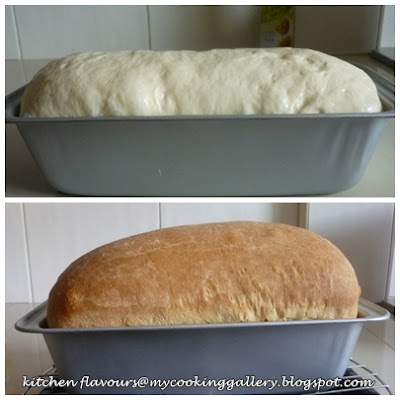 The dough is a pleasure to work with. It is soft and just a wee bit sticky, but a light sprinkling of flour on the work surface and your hands really helps.  The dough has a texture of a brioche dough, I just love the feel of it. This bread has three stages of rising, so plan ahead while making this bread. It has lovely oven spring. The top picture is the final rise in the bread pan, let the dough rise to about 1/2 inch above the rim of the pan and bake in an oven which was preheated first at 400C, then reduce to 375C as soon the pan is placed in the oven. At the 20 minute time into baking, I checked the bread and was really surprised how well they have risen further in the oven. So beautiful! I did cover the top with aluminium foil after that as the top of the bread is near to the heat element of my oven ceiling and I do not want an overbaked crust, just a light one for this bread. Continue baking for another 10 minutes and the bread is done. The second picture shows how high it has further risen in the oven during the first 15 minutes or so. 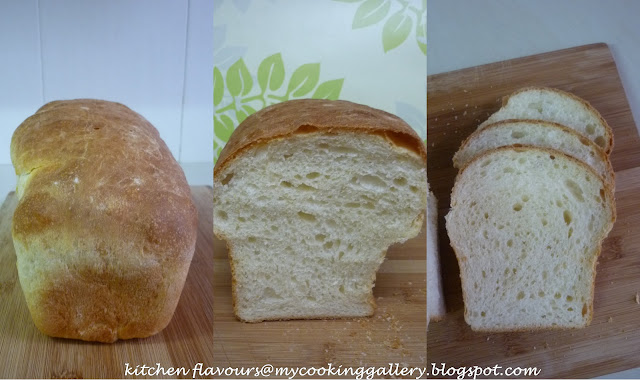 I made only half a recipe. All that waiting during the 3 stages of rising is definitely worth it! The bread is really soft, fluffy and really tasty, good enough to eat on its own. 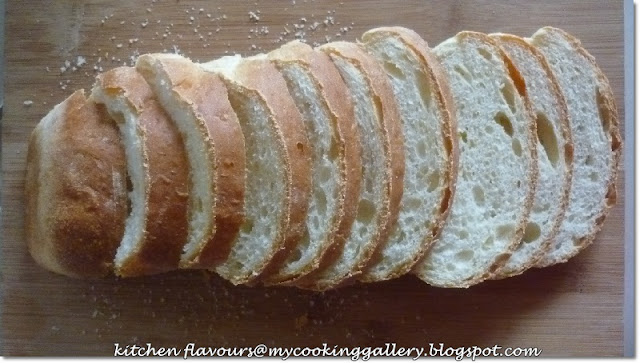 It has a soft crust and lovely springy interior. Definitely one of the best white bread I've made. 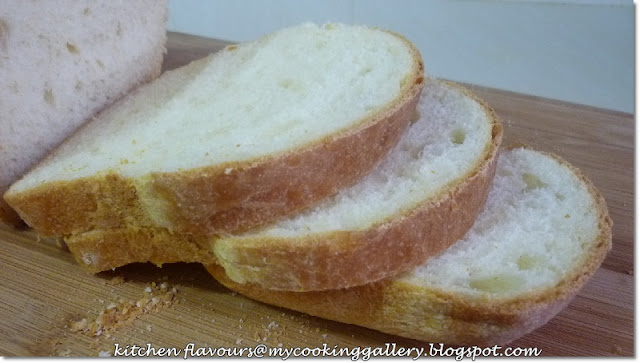 Just as a white bread should be, soft, fluffy and very tasty. Good, eaten plain on its own and I love it the best, when spread with a generous amount of cold salted butter, accompany with a mug of hot steaming black coffee! 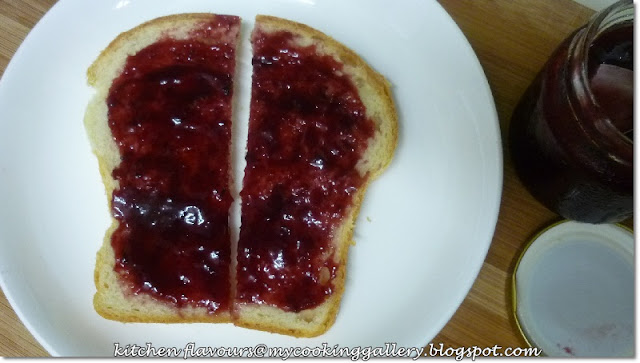 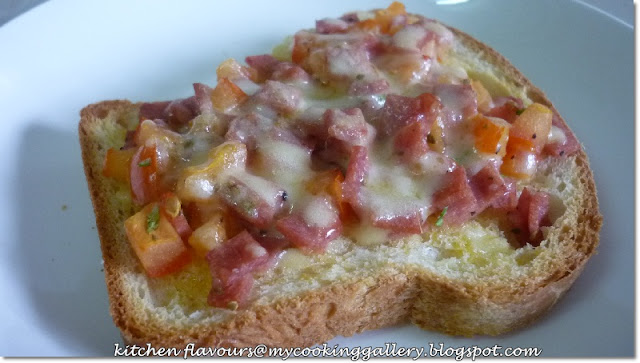 Great toasted! My kids requested this for their breakfast. Butter the bread, top with a mixture of chopped fresh tomatoes, sandwich ham, some chopped coriander leaves, dash of black pepper, some dried oregano and finish off with a sprinkling of shredded cheddar cheese. Toast the bread until crispy and cheese melts.  A satisfying breakfast! 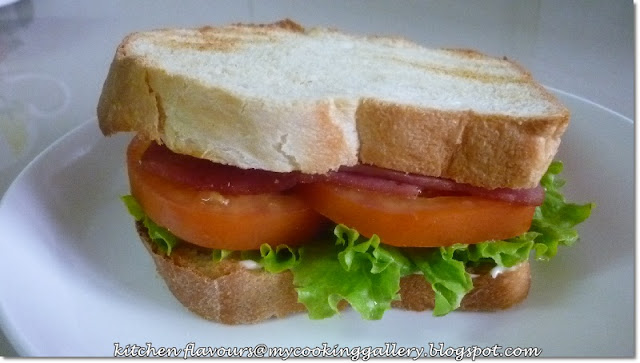 Now this is my breakfast (brunch actually!). Nick Malgieri has included some ideas on using the breads that you baked. This sandwich is one that he enjoys with his father, which is just a simple regular sandwich that I do make sometimes, the only difference is, I spread the bread with some butter and usually spread the mayonnaise in between the fillings. Nick Malgieri spreads a generous amount of mayonnaise on the bread and top with the lettuce, sliced tomatoes, freshly cooked bacon slices and top with the second slice of bread, also spread with mayonnaise.  Just toast the bread lightly first, then proceed with the assembling of the sandwich. He uses bacon for this, but here I have used sandwich ham slices. 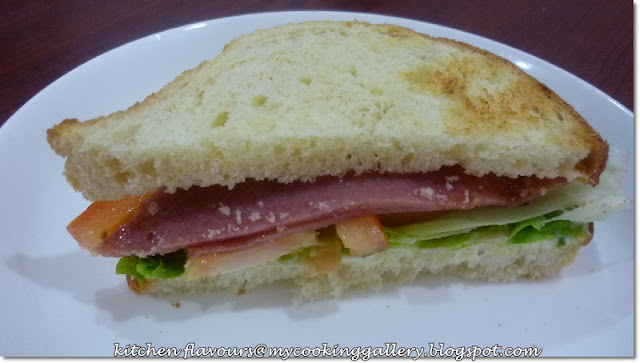 Then slice it in triangles and enjoy! I sure did! So good!

Nick Malgieri's Sandwich
Lightly toast 2 slices of Golden Sandwich Bread, and generously spread with mayonnaise.
Top one slice with a leaf or two of rinsed and dried leaf lettuce or tender outer leaves of iceberg lettuce.
Add 2 to 3, 1/4-inch slices of tomato; salt and pepper lightly.
Top with 3 to 4 slices of freshly cooked bacon, preferably still warm, and the remaining slice of bread, mayonnaise side down.
Cut diagonally and enjoy immediately.