It's "Potluck Week" at I Heart Cooking Clubs (IHCC). It's our third week of cooking with Nigel Slater. For Potluck Week, we have the option of cooking from any of our previous featured chefs recipes, but I've decided to use one of his recipes for this week's Potluck.

I've made "A Really Good Spaghetti Bolognese" a couple of weekends ago, for dinner, when the family requested for pasta. This recipe can be found from his book "The Kitchen Diaries", page 21, entered on January 17.

What drawn me to his recipe is that he uses full-cream milk or cream for his Bolognese. And I was wondering the taste of cream in a Bolognese recipe, as the traditional recipe do not use any cream or milk. That led me to google for info on "Traditional Bolognese Recipe", and found an interesting article here.

I have made some minor changes to the ingredients, using what I have, which are really just minor changes. The changes I've made are, to replace the pancetta with bacon, ground pork instead of lamb or beef. The sauce is cooked as per the recipe instructions below and simmered for about 1-1/2 hours, stirring occasionally, and checking the liquid level so that the sauce do not dry out. Then the milk or cream is poured in a bit at a time, and continue to cook for another 20 minutes. 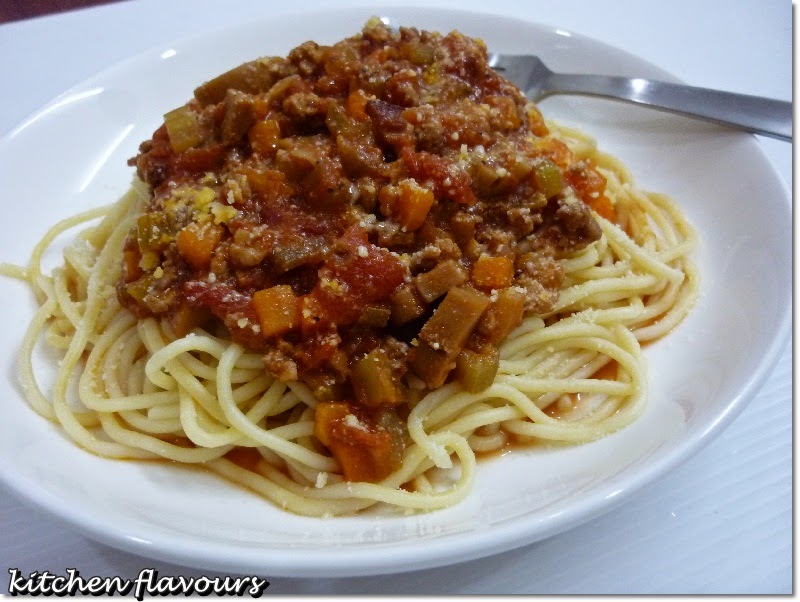 My notes : Before I added in the cooking cream, I tasted a spoonful of the sauce, it tastes really nice. I then added in about a quarter of the cream, and tasted again, it is nice. Then another quarter of the cream goes in, tasted again, I like it better with lesser cream and better still with no cream! So I stopped at only 100ml of the cream. Overall, this is a very tasty bolognese, though to me, it is not "A Really Good Spaghetti Bolognese" as the name of the recipe. (My favourite is still Jamie Oliver's, which I have posted here). That being said, the family did enjoy this pasta meal, I would not mind cooking this again, and would probably omit the cream.

To serve :
Spaghetti or tagliatelle for 4
grated Parmesan


Melt the butter in a heavy-based pan. I use a cast-iron one about 24cm in diameter - then stir in the pancetta and let it cook for five minutes or so, without colouring much. Meanwhile peel and finely chop the onion and garlic and stir them into the pancetta. Scrub and finely chop the carrot and celery and stir them in, too. Lastly, finely chop the mushrooms and add to the pan, then tuck in the bay leaves and leave to cook for ten minutes over a moderate heat, stirring frequently.
Turn up the heat and tip in the meat, breaking it up well with a fork.
Now leave to cook without stirring for a good three or four minutes then, as the meat on the bottom is starting to brown, stir again, breaking up the meat where necessary, and leave to colour.
Mix in the tomatoes, red wine, stock, a grating of nutmeg and some salt and black pepper, letting it come to the boil. Turn the heat down so that everything barely bubbles. There should be movement, but one that is gentle, not quite a simmer. Partially cover the pan with a lid and leave to putter away for an hour to an hour and a half, stirring from time to time and checking the liquid levels. You don't want it to be dry.
Pour in the milk or cream a bit at a time, stir and continue cooking for twenty minutes. Check the seasoning, then serve with the pasta and grated Parmesan.
Enough for 4.

To view what everyone is bringing for this week's Potluck, please visit IHCC. 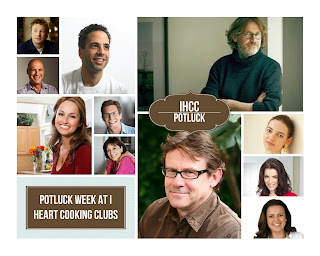 Posted by kitchen flavours at 9:48 AM