"Rootie Patootie", is our catchy theme at I Heart Cooking Clubs (IHCC) for this week. It's all about root vegetables, and I've chosen to cook with the humble potatoes.

I wanted a potato dish to serve with some baked rice and chicken. And this recipe from Nigel Slater's cookbook, "The Kitchen Diaries" looks nice, especially since I have all the ingredients, my homemade yoghurt and mint leaves from the garden pot.

Firstly, the potatoes, I've used russet, are first peeled, cut to big chunks and boil until they are just tender. Shake the potatoes chunks gently in the pan to bruise them a little with fluff edges. Onions are peeled, sliced thinly and fry in a little oil until soften, then stir in the chopped chillies, garlic and cumin seeds and let them warm through, taking care not to let them burn. Add the potatoes and turmeric, stir till they are evenly covered in the oil. Roast the potatoes in the oven for about 30 minutes until golden but not brown. For serving, place potatoes pieces on a plate and spoon over some yoghurt, a little sprinkle of mild chilli powder and chopped mint leaves. 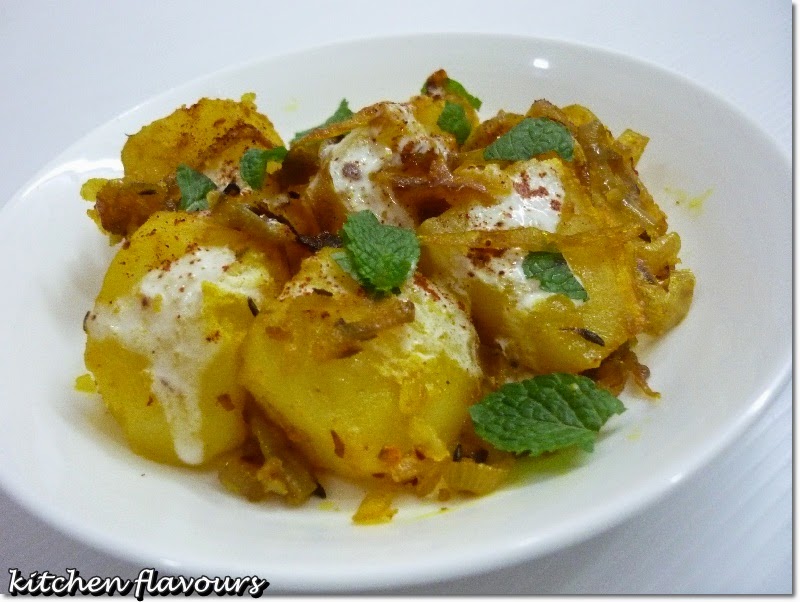 My notes : Really nice, though in my opinion, it could do with a little bit more of spice, as this is rather mildly spiced. Maybe the next time, I would add some garam masala to give it a spice kick. Overall, a lovely dish, and I served this with some baked rice and a chicken dish.

Peel the potatoes, cut them into the sort of pieces you would for normal roasting, then bring them to the boil in deep water. Add salt to the pot and simmer for ten to fifteen minutes, until the potatoes are approaching tenderness. You should be able to slide a knifepoint through them with almost no pressure. Drain the potatoes thoroughly, then very gently shake them in their pan so the edges fluff and bruise. Set the oven at 180C/Gas 4.
Peel the onions and slice them finely. Heat enough oil in a roasting tin to make a thin film over the bottom. The thicker the base, the less likelihood there is of the spices burning. As the oil warms, add the sliced onions and let them soften, then stir in the chopped chillies, garlic and cumin and let them warm through, stirring (and watching like a hawk) so that they do not burn. Add the potatoes to the hot oil, add the turmeric, then slowly stir and toss the potatoes so that they are covered with the seasoned oil.
Roast the potatoes in the preheated oven until they have started to crisp. Thirty to thirty-five minutes or so should it. You don't want them to be as brown as classic roast potatoes. They should be golden, and flecked with spice.
As the potatoes come from the oven, grind over a seasoning of salt, then spoon over the yoghurt, sprinkle with a very little mild ground chilli and scatter with the chopped mint leaves.
Enough for 4 as a side dish.

I'm linking this post to I Heart Cooking Clubs (IHCC)

Posted by kitchen flavours at 2:44 PM