Winter Leaves with Gherkins and Mustard

It's "Veg Out!", time for fresh veggies at I Heart Cooking Clubs (IHCC). We are currently cooking from our featured chef, Nigel Slater's recipes. For our fresh veggies week, I decided to go with really fresh! No cooking involved, just wash and dry the veggies, mix the dressing, toss and enjoy!


This simple recipe is taken from Nigel Slater's book, The Kitchen Diaries II, pg 41, on January 22, as Winter Leaves with Gherkins and Mustard. According to Nigel "The crisp, winter leaves - trevise, radicchio, in fact all the chicories - have a beauty not present in the lush green leaves of summer" and further along on the next page he mentioned, "The dressing of winter salads are something I tend to introduce a touch of sweetness to, in the form of walnut oil or balsamic vinegar, as a knee-jerk contrast. Occasionally it is worth flying more dangerously and adding other pungent flavours - capers, gherkins, mustard and salty, palate-cleansing cheeses - to the leaves too. The shock of the bitter, the sour and the pungent, together with the crunch of the leaves, makes for refreshing, sense-awakening eating". 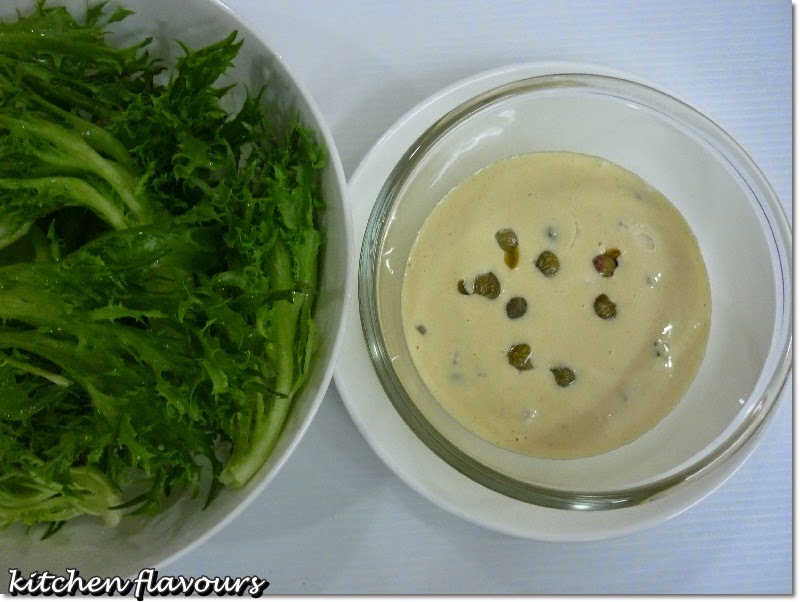 For the leaves, he says any bitter winter leaves will do, (white chicory, frisee or other crisp, bitter winter leaves) with a bunch of watercress. I have used frisee (a type of chicory), even though we do not have winter over here in Malaysia, frisee are available anytime of the year, as they are grown in the highlands, where the weather is much cooler. I like eating frisee in a salad, it is crispy, with a slight bitter taste to it. I have omitted the watercress since I could not find any. For the salad dressing, Nigel has used an egg yolk, but I do not like the idea of using uncooked eggs, so I have replaced the egg yolk with store-bought mayonnaise instead, which I know is not the same, but we love mayonnaise!


Nigel has used the food processor to mix the dressing. I took the lazy way out of using a bowl and a hand-whisk instead! Firstly I whisked the mayonnaise, grated Parmesan, Dijon mustard, white wine vinegar till evenly combined,  then I add in the olive oil, using only about 3-4 tablespoons, whisking until the dressing is smooth and thin enough to fall slowly from a spoon. Gently stir in the chopped gherkins and drained capers. 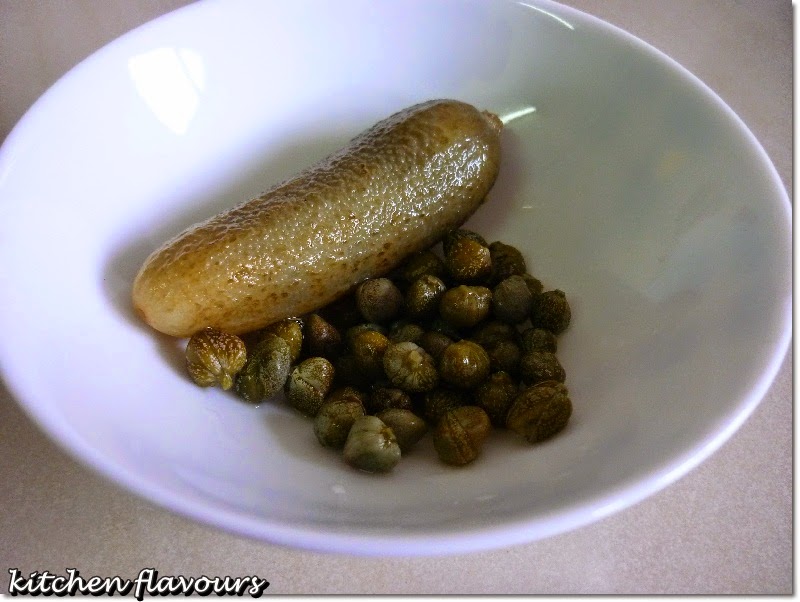 Pickled gherkins and capers. My sister bought a large jar of pickled gherkins and it was too much for her, so she gave me half, and I've almost finished my half. Capers, one of my favourite ingredients in pasta and baked dishes. I always have a jar or two in my pantry. And I never rinsed my drained capers, even though most recipes call for this step. I simply love the salty taste of capers. 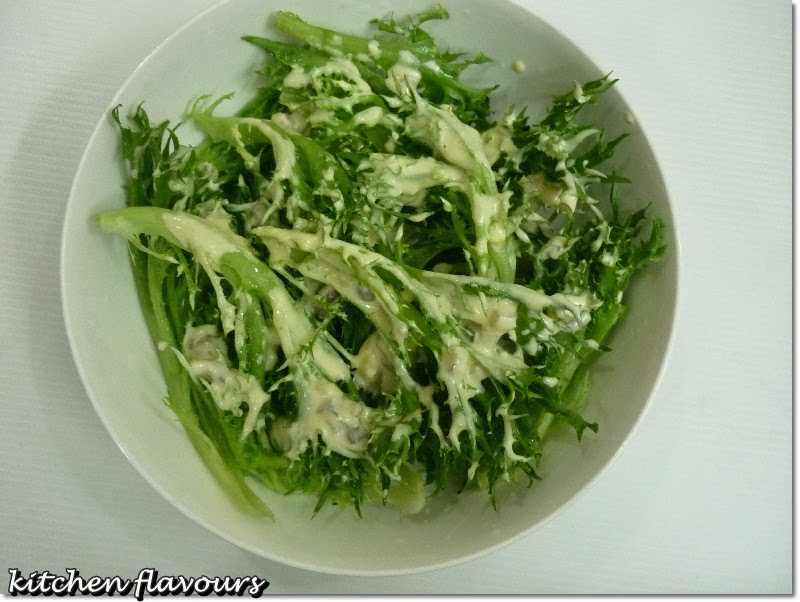 Toss the frisee with the dressing, and serve. Just like Nigel says, "The shock of the bitter, the sour and the pungent, together with the crunch of the leaves, makes for refreshing, sense-awakening eating". I like the way he describes this simple salad, and yes, it is good, even when I replaced the egg yolk with mayonnaise! The dressing is really nice. My daughter loves this salad, and so do I!


To make the dressing, put the egg yolk into a food processor, add the grated Parmesan, mustard and wine vinegar and switch the machine on. Pour in the oil rather slowly, as if you were making mayonnaise. Stop adding it when you have a smooth sauce that is thin enough to fall slowly from a spoon. Stir in the chopped gherkins and rinsed capers. Add no salt.
(I did not use the food processor. I used the hanb-whisk to whisk the mayonnaise, Parmesan, mustard and wine vinegar together in a medium bowl till evenly combined. Add the olive oil, whisk to combine, then stir in the chopped gherkins and capers).

Rinse and trim the salad leaves, removing any tough stalks from the watercress. Spin or shake dry. Gently toss the leaves in the dressing and pile on to plates.
Enough for 4.


I'm linking this post with I Heart Cooking Clubs (IHCC)